Gandhiji, known to his near ones as Bapu offered India a system of education known as nai talim or National Basic Education. This was proposed in 1937 based on his experience of teaching his own children as well as the children of his commune members while he lived at the Tolstoy Farm in South Africa. It also drew on his understanding of the India of that time, its social, political, economic condition, and the two major influences in his life then – Leo Tolstoy and John Ruskin. 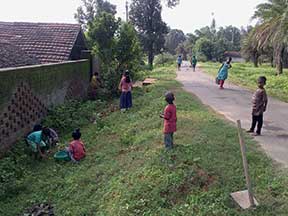 Gandhi was well aware of the state of the people in the country, who at the time lived almost entirely in the villages in close proximity to natural landscapes with still some access to its many natural endowments. They engaged mostly in activities related to husbanding the land complemented and supplemented by artisan crafts and trade as a means of livelihood. Life, however, was lived under the demoralising and often humiliating governance of an alien people whose political and economic interests were driven by profit and extractive motives. Adding to the enervated state was the caste-class dynamics; indebtedness to ruthless money lenders.

Mostly belonging to the peasant, dalit, artisan, craft, pastoral, nomadic and adivasi communities and due to the dominant religious beliefs at the time, life was lived with a reverential attitude to nature. Given this background and the reality of a colonial rule, Gandhi was seeking ways for the nation’s people to be independent, self governing, self sufficient. In his mind the key to swaraj and a life of dignity was self reliance. Here then lay the crux of the matter and one of the solutions proposed was through putting in place a system of new education, nai talim, with the unarticulated understanding that it would undergo regular review and adaptation to meet the criteria of relevance from time to time.

Having proposed the idea of a system of education that would strengthen the inherent positive traits within the village community, bring dignity, self reliance, self sufficiency and Swaraj he left it to the experts and reputed educators of the time to work out the details of a roadmap for such a system. The broad specifics being: education to be in the mother tongue; integrating the pedagogy of academic subjects to locally relevant productive activity udyog; economic self reliance, as far as possible, to be achieved through sale of produce and products from the school; free and compulsory elementary education; an education for the confluence of heart, hand and head – in that order. According to Gandhian thought, the training of heart implies character building for harmony with self, others, and with nature. Educating the hand is to restore the dignity of labour and educating the head is for creating and utilising knowledge for better survival at a higher plane of conscience.

Nai talim had a certain following in the initial years where Gandhiji’s influence prevailed and his advice sought and taken. Gandhi was always available for people who sought him out, but was not one to impose his ideas. This was because he himself was experimenting; humble enough to learn from failure and prudent to not let success go to his head. Very early in the day he realised and admitted that the production processes – which was mostly Kathai (spinning) done by the staff and students was unable to sustain the school economically. Although he had a large following, the entire nation literally, not all understood his philosophy or the rationale for proposing a certain thing. As a result many entered politics, others took up reform and constructive work and a few devoted their energies to education. By the end of the 1950s most of the nai talim initiatives met a natural end. And where they survived and still continue to survive, mostly in Gujarat, they are in a flux.

In many states where one comes across a few scattered initiatives still practicing a productive work approach, the original philosophy is mostly compromised, a sense of mechanical routine having set in mainly to keep memory and tradition alive. There are still others who have begun anew, recognise the nai talim approach to learning as a powerful educational tool. In these cases the emphasis is on a practical integrated pedagogic approach in keeping with contemporary educational needs. Gardening, however, is the common thread. In many such institutions, the head teacher and their team of teachers work diligently to make the learning experience enjoyable while ensuring desired learning outcomes. Within the country’s education system, its relevance was found to be significant enough for the National Curriculum Framework 2005 to commission the drafting of a position paper based on the nai talim philosophy (Work and Education position paper 3.7).

Given the present day trend of manufactured needs, cultivating a discerning mind for dhyan poorvak engagement in all spheres of life is an immediate need. The present school curriculum relates theoretically to the needs of society as perceived by the dominant discourse. The skills relevant to cope with the myriad challenges thrown at us for everyday living are rarely addressed in spite of the ample opportunities provided. Hence the common activities within nai talim of diligent engagement with takli, charka, krishi, safai, charmakari is not only a mechanical activity, it has more to it, it is a worldview! nai talim works towards developing a worldview. And, a system of education that nurtures a worldview of peace and justice, in this author’s opinion, is of eternal relevance. 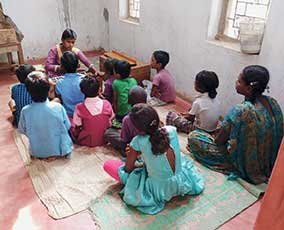 From a pedagogical point of view the nai talim system may have much to offer as it is centred around productive work. Children by nature like to do something all the time and if possible do different things. If this doing results in a product or process that is found useful they thrive on its positive feedback. We observe this in the home, where the child is all the time wanting to be a part of the adult world, doing and many a times insisting on wanting to do what adults are doing or participate actively in the doing process. It is these doing experiences that concretise learning. Although many schools have adopted or experimented with an activity approach, what these activities have concentrated on may be vastly different from products and processes that would qualify as productive work. Being playful, which is the natural way of learning, is almost always an imitation of things children observe in their immediate adult world, in a way, trying to make sense of the adult world, wanting to fit in. Natural learning is not based on prescribed text books narrowly channelized within subject heads nor based on tested educational theory. It can at best be facilitated by the conscious creation of controlled safe environments for safe exploration. Nai talim provides for such learning for e.g. picking up a topic from any immediate situation be it a dari one is sitting on, a lizard on the wall or a snack one is enjoying.

To my mind, however, the relevance of nai talim, presently, is not so much educational or philosophical as it is ecological and ethical. More and more people today are convinced that localisation is the way forward. There is the overwhelming overpowering influence of globalisation and development which in many ways is colonisation from within. The multiple crisis that humanity has brought upon itself in the form of climate instability, economic uncertainty, unsustainable agrarian practices, degradation of ecosystem services are forcing us to pause and look closely at the way we have engaged with life so far. Current times require a culturally transformative education that sees beyond curriculum, prescriptive texts, evaluations, class size, RTE kind of mandates and such like. 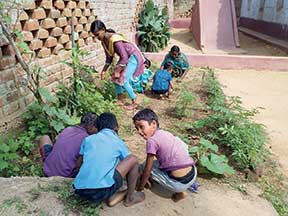 These times demand building relationships between the learner and the teacher, the community, the living space. There is a need to find associations and connections within these spaces to everyday activities and everyday things. Society is in need of new values, new ways of doing things, a new story which moves from the I to the we, to be able to see the world as one and see the interconnectedness of everything. In education it begins with building relations to undertake a journey of co-learning between the teacher and the taught within the local context.

Ideas with intrinsic value take on a life of their own to emerge in various forms in keeping with the needs of the times. Some ideas come before their time and seem to die natural deaths, albeit temporarily. In that sense, Gandhi was proposing an alternative to the prevailing situation during his time with the vision for a just and peaceful society. If one wants to look for its relevance today, that is, if one is looking for answers to deal with the present crisis in society at the individual as well as the planetary level one will have to draw deeply from the vision Gandhi presented to the nation (and the world).

In many ways Gandhiji was an idea that lived in human form to leave behind for the human race many nuggets of wisdom to hold us in good stead for a life of connected completeness. Nai talim was one such nugget, a blessing the nation in a hurry failed to see completely.

The author is an independent researcher associated with Taleemnet an endeavour of Multiworld India (www.multiworldindia.org). She can be reached at taleemnet@gmail.com.