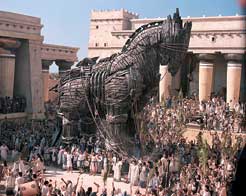 The excitement was contagious…
I had graduated from Class II to Class III and my elder sister was browsing through my new textbooks, while I smelt them (I don’t know about now, but then new textbooks had this special fragrance, which was one of the charms of moving from one class to another). No other book got her attention as much as Monica Felton’s Down the Ages did. ‘You’re really going to enjoy this,’ she had said. ‘History book?!’ I remember thinking to myself… but sure enough the impact that the Class III history book has had, despite my otherwise poor memory, is testimony to what was in it…

The only two chapters that I remember are The House of Lac and Romulus and Remus. At that stage, no one clarified to me the difference between myth and history – but to think and believe that the two babies Romulus and Remus were abandoned to float in a basket in a river and then rescued and brought up by a she-wolf, or the great escape of the Pandavas from a house made of lac were fascinating ‘truths’ for me and significantly increased my wonder and amazement towards the world and life on earth. Perhaps as much as the experiment of germination in EVS did – placing a few rajma seeds (red beans) on a wet piece of cotton on a plate and watching them sprout.

History and mythology
The relationship between history and mythology is an intriguing one. Often regarded as part of popular culture, mythology falls in the shadowy terrain of literature and history, and academia, particularly in India has not accorded it much importance. The recent history of criticism however, has accorded immense importance to popular culture as a vital site where ideologies, values and beliefs of a people can be seen and analyzed. On the other hand, you also have, especially in India, a large percentage of the population which still does not regard the epics – Ramayana and Mahabharata – as pieces of fiction, but believe that these were historical events in their entirety.

The author is a student of Education (Elementary) at TISS, Mumbai. She also works as a freelance communication trainer and editor. She can be reached at simranluthra@gmail.com.