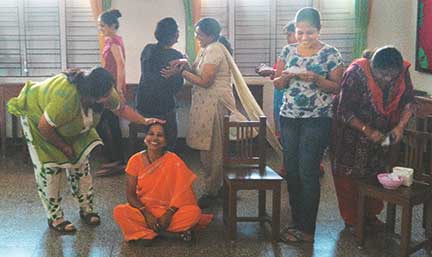 The weekly Reflection Meetings at Shishuvan are one of the highlights of the school’s teaching and learning process. It’s a space created for teachers to introspect, share their teaching experiences, celebrate their success stories, address their challenges, explore, learn and grow individually and as a cohesive group. I have had the delightful opportunity to facilitate many Reflection Meetings for teachers of the High School Department. Here’s a sneak peek into one of the meetings I facilitated. We reflected upon our emotional engagement within and outside school, the interconnectedness of these emotional states and their influence on our experiences through creative movement and drama exercises.

The meeting began with an energizer wherein teachers walked around the room greeting their colleagues using different body parts creatively. Teachers greeted each other with their elbows, wrists, shoulders, foreheads and also with the conventional Indian Namaste. This got our entire group giggling and smiling, brushing away the end-of-the-day-exhaustion that most of us entered the space with. It was an interesting way to get everyone attuned to the physical space and be present in the moment.

We then settled down and the group was introduced to the main activity of the day. I had taken along two bowls which contained chits, one that identified different emotional states (For e.g. happy, sad, disappointed, hurt, etc.) and another that identified one of three roles – student, colleague, teacher. Teachers were not aware of the contents of the bowls. They were informed that one member will begin by picking up a chit from each bowl and enact based on the role and emotional state mentioned on the chits. Members from the group could enter at any given time and be part of the stage space, provided they pick up the two chits every time they enter. Participants were also informed that they could leave the stage space whenever they felt like doing so and multiple entries (each after picking up a new set of chits) were permitted. They were informed that it’s impromptu drama.

While a few members of the group initially hesitated, one teacher was quick to volunteer and start the process. Once started, there was no going back. Teachers picked up chits and everyone was on stage. Some left and returned and some changed multiple roles and emotional states. There was shouting, soft voices, sounds of crying, and loads and loads of laughter. This continued for about six-seven minutes and the group settled down in a circle. If you were in the room at this point, you would encounter smiling faces, bright eyes, and sounds of incessant laughter! We stayed with this feeling for some time and each one was asked to reflect and think about the entire experience – their observations, their own roles, and the process.

Teachers shared their experiences. The group was encouraged to establish links between these experiences, observations, and everyday events. A lot of ideas, observations and concepts emerged during these discussions. I have thematically categorized these in the following points: 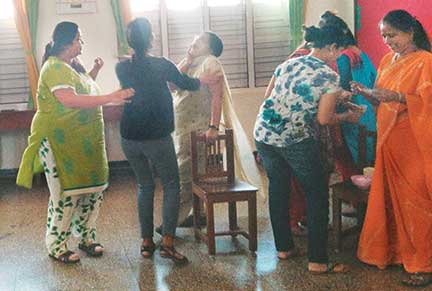 1. We experience and express emotions differently
Observations of the activity revealed that the interpretation of each emotional state as well as its expression differed within the group. While one teacher interpreted “hurt” as being physically injured, another perceived it as being emotionally distressed. The intensity with which emotions were being expressed also differed. The group discussed each role and their feelings associated with it. They expressed how individual feelings, existing from a previous event, thoughts about the same, as well as one’s own traits, can influence the way emotions are experienced and expressed. The discussion left us respecting these varied manifestations and expressions of emotions in us and our students.

2. Gaining awareness of one’s emotional states and experiences enhances one’s ability to monitor one’s behaviour and engage in positive interactions with others
We discussed how enacting an emotional state made the group aware of their current feelings and how they consciously changed their behaviours/actions to be able to experience the emotion to be demonstrated. This led us to share how emotional awareness can help us acknowledge others’ and our own verbal and non-verbal behaviours. This helps us attune our body language to suit the given situation and approach it in an emotionally healthy manner.

3. Identifying emotional states and experiences of others encourages us to empathize with them
Teachers expressed how enacting a particular emotional state helped them experience the same feeling and better understand the role. We discussed how awareness of our colleagues’ and students’ emotions can also help us understand their context better. One teacher shared how enacting the role of a “lonely student” helped her empathize and become sensitive to the needs of students who are often feeling hurt or lonely in class.

4. Emotional experiences of those around us influence us and vice versa
An interesting observation was that of how the teachers enacted the first couple of minutes of the act silently, as if miming. Despite not being instructed to do so, teachers did not break the silence for a long time and each member joining the stage continued to mime. Teachers used this experience to reflect on how our emotional experiences also shape the feelings of those around us. We discussed the relevance of this during classroom interactions and how the teacher’s emotional state can influence the response of the students and vice versa. 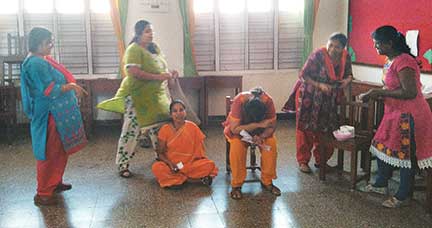 6. Emotions experienced in one space can spill-over into other spaces
The teachers observed how an emotion was carried forward from one interaction in the enactment to another, even when these interactions had not much in common. This observation led the group to discuss how emotional experiences with students in one class spill over to the next class and sometimes emotions experienced with colleagues or others in different spaces also spill over into classroom spaces. Teachers also discussed how acknowledging this will enable us to consciously take steps to experience emotions in the present and suspend past experiences for the time being.

The discussion and reflections enlisted above have given us a good start to explore our emotional experiences and actively work towards emotional well-being. We concluded our session by passing some positive emotions to each other while standing in a circle. Once again, a drama-based activity served as a positive closure, while keeping the focus on emotions and allowing space to also implicitly build team cohesiveness. 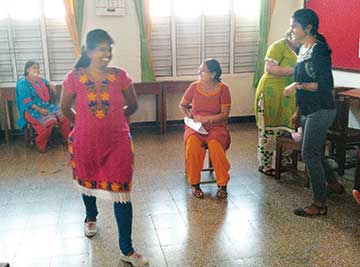 It was indeed a heart-warming and thought-provoking session for me. Looking forward to more drama, fun, and reflection! Here are views from some of the teachers who attended the session:
“The reflection meeting conducted by Lamia seemed like a fun game throughout until she asked us to think about the roles we played. The activity based on enacting a character with a random mood turned out to be quite a hilarious and crazy one. At the same time, upon reflection it also turned out to be an activity that got me to become consciously aware of how my emotional state, expressions and behaviour can impact the people and energy of the space I am in. The activity got out so much of perspective and observation from everyone involved. It brought forth the common reactions and experiences we as teachers see every day. It was nice to understand the transfer of energy and mood that takes place around us to a certain extent. We know these things, but talking about them with the help of the activity to guide us helped in looking at these things with a different perspective. The reflection meeting on the whole turned out to be a complete contrast from the day I was having up until then. I got to laugh, de-stress and learn something at the same time without even realizing that my emotional state went through a complete shift during the activity which was the basic point of the activity according to me. Learning Outcome achieved!”
– Sneha George, High School Teacher (Geography)

“On the 8th of December, 2015, high school teachers were delighted because Lamia planned a wonderful session for our reflection meeting. While being enjoyable, the activity imparted to us subtle and important learnings. After a fun-filled ice-breaker, the acting part was fun as well as chaotic, not to forget entertaining for the on-lookers!

After the first part, we sat down to reflect on the activity. Several parallels were drawn to our lives such as:

All in all, the session was very enjoyable. We wish to have more such sessions in our reflection meetings!”
– Ketaki Mavinkurve, High School Teacher (English)

The author is an M.A. in Applied Psychology with Specialization in Clinical Psychology from TISS, Mumbai and is currently working as a School Psychologist at Shishuvan School, Mumbai. She can be reached at lamia.bagasrawala@gmail.com.