I have not seen the Indian cheetah, not even in a zoo. The last one was hunted in 1947 and it was officially declared extinct in 1952, before I was even born. The Asiatic cheetah, very closely related to the Indian Cheetah, thrives in Iran, although the populations are dwindling alarmingly. The good news is that the African Cheetah is thriving well in its continent. Then there is the Indian elephant and the African elephant, two very endangered animals, as endangered as the Asiatic Lion but the African Lion is thriving. The Indian rhino and the African rhino are another pair of species that are protected. If you are reading this carefully you will realize that these animals are found only in specific regions. The question then is – why don’t we see elephants or rhinos or lions in the American continent or in Europe? How did these animals come to be in Africa and Asia? An even more fundamental question is – how did such marvelous biodiversity come to be similar in widely separated habitats and widely diverse in seemingly similar habitats? How did some species evolve, diversify and conquer far and wide places, while others couldn’t survive and went extinct? Answers to questions such as these and many others come from the study of a branch of science called biogeography.

Biogeography is the study of the distribution of species and ecosystems in space and time. Critical to the study of biogeography is the knowledge of concepts related to the geographical space and changes that have occurred through geological time periods. It is an integrated science, whose findings are based on inquiry that unites knowledge of and information from ecology and evolutionary biology with geology, climatology, and physical geography. Thus, it provides us with a foundation for understanding biodiversity.

The beginnings
Alexander vonHumbolt, a geographer and naturalist and explorer from Prussia laid the foundations for biogeography through his extensive work on botanical geography. There were others, botanists and geographers who contributed in the early years. But two people whose work established this discipline into an acceptable domain of science were the English Naturalist and Biologist Alfred Russel Wallace and later the German geologist Alfred Wegener.

Wallace and Wegener
Alfred Russel Wallace’s name figures second to Charles Darwin for the path-breaking Theory of Evolution by Natural Selection. A sad injustice to the work of a remarkable naturalist. Few are aware of his contributions to this theory arising from his explorations in the forests of Amazon and Malaya Archipelago because of which he is known as the Father of zoogeography. Wallace earned his living by collecting specimens for natural history museums. He was therefore an expert taxonomist too. But he did not stop with mere collection of specimens. He observed and analyzed what he saw and was struck by the patterns of diversity and distribution of fauna and flora. He soon realized that he was seeing evolution in action. The accepted view, of his times (i.e., early 19th century), that species were created with adaptations made no sense to him as he was noticing that regions with similar climatic conditions had different kinds of species. Through meticulous observations and analysis he strived to show that geography had an impact on the range of species. During his explorations in Indonesia, he was particularly struck by the difference between the Southwest and Northeast part of this region. Despite similar climatic conditions the former was ecologically similar to Asia whereas the latter to Australia. 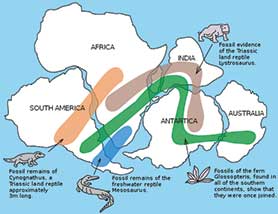 The demarcation which he meticulously charted out to understand the species diversity came to be and is still known as the Wallace line. Wallace’s friend, the English ornithologist, Sclater recognized and demarcated six biogeographical regions of the world. All the evidence that Wallace gathered from the field were written into a scientific paper on evolution by natural selection. This was sent to Darwin for his comments and if found suitable, for publication. What followed is history, a lopsided one with Darwin in the centre space and Wallace sidelined! Without Wallace’s work on biogeography the Theory of Natural selection would be difficult to comprehend.

Wallace’s six regions roughly coincided with the continents of the globe. But how does this drive evolution? Further clarifications came from Alfred Wegener, a geophysicist and meteorologist by profession. He was fascinated by the fact that identical plant fossil were to be seen on opposite sides of the Atlantic. How could the species have crossed the large distance separated by the vast ocean? He studied the landmasses and realized that they fit with each other like pieces of a jigsaw puzzle. More studies resulted and in 1912 he proposed the theory of Continental Drift, in which he claimed that the continents were slowly drifting around the Earth. His theory was not accepted until the 1960s, when the ocean floor began to be mapped and the plate tectonics theory was formulated.

The image below shows fossil finds that Wegener gave as examples in support of this theory.

The conclusions drawn from the theory of plate tectonics and continental drift have far reaching implications for biogeography. They help understand why elephants and rhinos or giraffes are found where they are. They help understand extinctions, formation of new species, the evolution of human species, or their migration from the region of origin, i.e., from Africa to as far as Australia.

Biogeographical regions of the world
The work started by Wallace, Scalter, and Wegener has grown. Based on the biotic and abiotic factors the Earth’s regions have been divided into eight biogeographical regions. They are: Nearctic, Neotropic, Palearctic, Afrotropic, Indo-Malyan, Australasian, Oceanic, and Antarctic. Older texts give The Afrotropic as Ethiopian, Indo-malyan as Oriental and Australasia and Antarctica clubbed together as Australian. 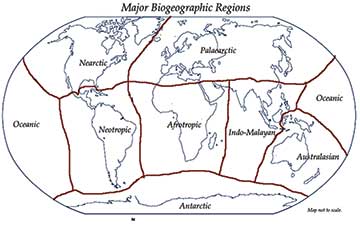 Biodiversity conservation is a top priority for nations across the globe. It is necessary to understand how species came to be where they are, why some survived while others went extinct, why and how the biomes changed, climate turmoil, global warming to make crucial decisions for conservation. Biogeography helps understand all this. Two examples of studies from India show the relationships between organisms found in the Indo-Malayan regions.

An Indian ichthyologist SunderLal Hora (1896-1955) proposed the famous Satpura Hypothesis to explain the presence of temperate fauna in several isolated hill ranges of the Nilgiris, Shevroy and other plateaus. The fauna were similar to those seen in the Himalayas and Assam range as well as the mountains of Malayan peninsula and Java. He suggested that the Satpura Range of Central India acted as a bridge providing for the Malayan connection of many Indian fauna and flora in the peninsula and the Western Ghats of India. His findings were the result of his studies on fresh water fishes. This hypotheses has not been accepted by all, some of whom believe that the presence of similar fauna is indicative of convergent evolution.

A recently discovered burrowing frog from India differed distinctly from other known species found here. Molecular work done showed that this frog was related to those found in the family Sooglossidae. Frogs of the family Sooglossidae are known only from the Seychelles archipelago and not India. Further studies uncovered that such species were probably more diverse in the Indo-Madagascar range during the Cretaceous period (65 MYA). Today there are only four species on Seychelles and this single one in India that survive today.

Modern biogeographic research combines information and ideas from many fields, ecology to molecular biology, climatology to geological changes, soil dynamics to physical geography to create a holisitic understanding of biodiversity. It is the single most important field of science that can give meaningful directions for conservation. Since the 18th century, biologists have investigated the geographic distribution of plant and animal diversity. In addition to palebiogeography, systematic biogeography, island biogoegrapahy the latest exploration is the biogeography of microorganisms. 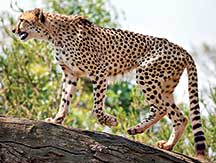 Knowledge of spatial variation in the populations and types of organisms is as vital to us today as it was to our early human ancestors. Organisms that once roamed the Earth became restricted to isolated pockets. Geological activities created both barriers and new paths. We are trying to adapt to heterogeneous but geographically predictable environments. An integrative field of inquiry that unites knowledge from ecology, evolutionary biology, geology, and physical geography will serve to refine our understanding of the changes that are occurring on Earth. As we contemplate actions such as relocating lions to other wildlife sanctuaries, or to introduce African cheetahs into India, studies on biogoegraphy will help us make the best possible choices, to make a success of conservation efforts. Future generations will then continue to see the cheetah, elephant, rhino and lion and who knows maybe even some new species that emerge from such successes.

Take a map depicting the major biomes of the world. Compare it with the map of the biogeographic regions (or try superimposing this map on the map of biomes)

Try to analyze your comparison and find answers to the following questions/statements: