When Charles Dickens penned these words in his famous book, A Tale of Two Cities more than 150 years ago, he could easily have been describing the current times as well. Had the work been titled, “A Tale of Two Indias” it would have perfectly described our modern age of ‘India’ and ‘Bharat’.

Never before has India seen so much facility, innovation, and development. Yet flip through a newspaper and you are instantly reminded of the mounting problems our society is facing: pollution, rape, crime, and corruption.

When Dickens spoke of London and Paris in the 1800s, he did so when they were at an advanced stage in the industrial age. It has taken India many years to “catch up”.

But while it has shared in many of the benefits that come along with material development, the trouble is that when too much emphasis is put on the mass-food for the masses, clothes for the masses, education for the masses – something fundamental is lost: our identities. And when our identities are lost, our relationships begin to disintegrate. Our relationships — the primary source of happiness according to scientists — begin to break down. Then all sorts of strange things start to happen.

People begin replacing people with “things” and “gadgets”. Time that was once spent in talking, playing, or just being together gets replaced by “virtual relationships”. This gives a whole new meaning to the idea of “fast friends” — in this case more like “fast food”— quick, easy, convenient, yet entirely unfulfilling. In the world of mass, we have disposable razors. And when it comes to our marital relationships, we now have disposable wives (and husbands). You get children who can’t relate to their teachers or classmates or family members – and who are diagnosed with ADD and depression — and who are medicated heavily with drugs. You get teens who can’t relate to their teachers or classmates or families and are so alienated and conflicted, that the only way they can gain a sense of normalcy is to shoot them.

When we blindly embrace “mass culture”, and lose our identities, we lose what it means to be human. And it is this de-humanization that gives rise to all of these bizarre types of anti-social behaviour.

These phenomena, which seemed only like Western symptoms a decade or so ago, are now becoming more prevalent in India. So therefore, if we’re smart, and want to prevent things from getting worse we’ll need to begin to take steps to re-humanize our world. To mend the holes in the fabric of our culture by reclaiming our individuality and our identities.

And what better place to start than in our schools — through education.

Years ago, the great seers of India had a clear idea of what education was all about. They understood how sacred each human life was. They realized the potential each person had—to do incredible things, or create terror for the entire world. As such, so much energy went into giving “samskars” to children. They even began the process long before the child was born—creating a nurturing household. Guiding parents in a sattvic conception, guiding the mother during pregnancy to remain in a peaceful mood, and so on.

The earliest years of schooling were meant for establishing a basic foundation of language, mathematics, general knowledge, and of course, character building. Along the way, teachers made great efforts to understand the nature of each child — what his unique personality traits were. By the time a child was around 12-13 years old, they decided the best course of study for him based on his nature — whether he would go into business, administration, the arts, education, and so on. In this way, teachers could achieve what I call RPRP — getting the “right person in the right part.” Because, as we all know when it comes to what Shakespeare would call the great stage of life, that when you get the right people in the right parts, you get a drama that works. You attain lila. 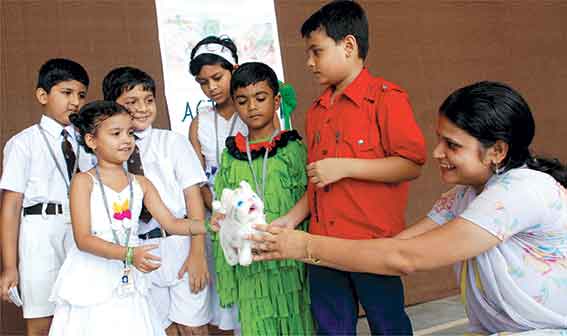 Such a system was in place not too long ago — in fact at the same time that Dickens’ classic story was published. However, around 1850, when the “modern”, industrialized education system was introduced, all of that changed. That was a time where the British needed more and more administrators to operate the mighty Raj — and there you had the first mass rush for a career in the Indian Civil Services. A century later after India’s independence and its desire to compete globally in fields of technology and science, you had the advent of the IITs. And the next rush began — whether you had the aptitude for it or not.

Unfortunately, as they say, old habits die hard. As we all know, decades and decades of conditioning for a push toward IITs, engineering and Civil Services has dominated the minds of parents, and today, the rush is still on. And while India’s economy has developed and there are hundreds of different types of jobs to choose from, we find that the majority of parents still go for the safe jobs.

The sad reality is that the child’s nature has very little to do with the job he/she gets. Careers, by and large, have not been an integral part of the learning or schooling process. Discussions about a child’s future plans happen in parallel to his school life — at home, on the playing field, on Facebook. The dialogues and planning is typically disconnected from their school life and studies. And it is strange that as rational as we seem to be otherwise about studies and life in general, most career decisions are made rather arbitrarily. As such, there is only a random chance that students wind up as “RPRP”.

And that is why we find ourselves in the social mess we are in today: We have millions of people who have lost their identities in the world of “mass”, and get stuck in careers that don’t suit their natures. They become “duhkiatmas”. And you can’t have a successful lila when your players are dukhiatmas.

So if the first place where we can begin the process is the realm of education, what is it that we can do practically to move in this direction? Here are a few suggestions:

First, we must as educators make a commitment to expand our educational responsibility to include career education as part of our syllabus. Education must be for the whole individual, not merely for scoring marks in exams.

Second, we can allocate time and resources to understanding the nature of children. This can be done by exposing children to various experiences within the school, and engaging in regular observations to identify their personality traits, abilities, and interests.

Third, we must enfranchise counsellors and expand their roles from behavioural adviser to guides and coaches who also take into consideration students courses of study, careers, co-curricular activity choices and so on.

Finally, we need to involve parents in dialogues regarding their children’s abilities and possible career directions. Parents are the ultimate decision makers in children’s lives, and we must create opportunities for them to learn about these topics so they can make more informed and effective choices with respect to their children’s lives and careers.

It took over a century and a half for our society and educational system to become de-personalized. No doubt, it could take equally as long or longer to set things right. But if a journey of a thousand miles begins with a single step, then this is a great first step to take.

The author is Director of Jiva Institute, Faridabad. He can be reached at steve@jiva.com.