It was Saturday. All students were getting ready to clean the school compound as part of their social work class.

On the left side of the road is the Government Middle School (where I teach), and on the right an Anganwadi Centre. The Anganwadi children were waiting for their teacher. Some of them were standing with their elders. Almost all the children’s cheeks were smeared with dry mucous. And a few girls were carrying their siblings on their backs. 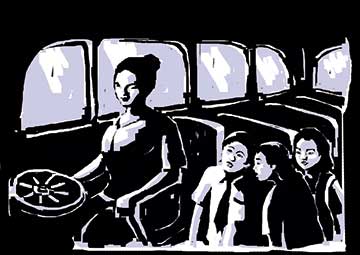 It was the first time I came driving our van to school. The students were awed. They were surprised that I could drive.

When I got down, some of the students stood up. They had been squatting in the middle of the road. Among them was a boy, Kaling. He had an oval face and well-trimmed blonde hair. He was very smart with bright eyes, wearing a well-ironed uniform, but had mud-cakes on his legs.

He spoke softly, but I could hear, “Wow! W…w…wow! Girls can also drive a vehicle!” Then he proudly said, “When I am grown up, I will sell trash. And then I will buy a bike and drink casino*…”

I asked, “Why rum, Kaling?” He replied, “Every night my father drinks rum and beats my mother. And I like that!”

I looked at him again.

Kaling was just a preparatory class student. His father had a bike.

Why did Kaling say thus? What could be the cause of his thinking that driving a vehicle, drinking alcohol, and beating the wife are acts of manliness or bravery? Could it be his family background? Or does the society he grow up in make him feel thus? What type of person will Kaling grow up to be? Do we, as teachers, have any role in his harbouring such thoughts? What measures should we take to save children from such an environment?

I am still looking for answers to these questions that young Kaling made me ask myself.

The author is an English teacher at a government secondary school in Lohit district, Arunachal Pradesh. She can be reached at rejum2907@gmail.com.