As our vehicle made its way through the meandering curves of Arunachal Pradesh, the majestic yet brooding snow-capped mountains played hide and seek with us. Though I was delighted by the beautiful sights along the route from Tawang to Tezpur, from the breathtakingly beautiful Sela Pass to the colourful copper manis and handsome yaks munching on the grass dotting the roadside, my mind was elsewhere; I was dreaming about the children’s community where I had stayed for a couple of days. Located in the remote village of Lumla beyond Tawang in Aruncahal Pradesh, amidst lush forests surrounded by high mountains, Jhamtse Ghatsal is a sweet haven overflowing with love and compassion, as the Tibetan name suggests.

A tour of Jhamtse Ghatsal
Saurabh, teacher cum co-coordinator, mentioned that 88 children within the range of 5 to 17 years, largely from the Monpa tribe and Tibetan families from nearby villages along with 25 staff members and teachers live here. The sprawling campus has numerous cottages that house the living quarters of children, teachers and staff, a guest-house for volunteers, classrooms, office, and a kitchen-cum-dining room. There are separate living quarters for teachers and children. Leki, a student from the first batch of Jhamtse, showed us the children’s living quarters: four family houses where he lives with his friends and Amalas or house mothers. We had a look at the adjoining classrooms which were brightly decorated and brimming with wall paintings, drawings, pictures, projects, charts and assignments made by the children and teachers.

Curriculum and pedagogy
In a classroom with a creatively designed seating arrangement, I met Gombu Lhamu, the head-teacher. She teaches the primary section and mentioned that they follow the CBSE curriculum with ICSE books being used by teachers as reference. The presence of fewer children in lower grades makes it feasible to practice multi-grade learning. The primary section has an integrated curriculum. For the higher grades, from V to X, five core subjects along with Tibetan is taught in accordance with the children’s grades. While talking to children and teachers, I understood that in terms of pedagogy, there is a stress on having meaningful discussions to arrive at a mutually accepted understanding. Also, contextual stories are used as a tool to encourage children to practice critical thinking. Apoorva, the science teacher, shared, “To explain the concept of inference, I used a story with characters from the community and posed questions to enable the children to observe, build a theory with the help of picture clues and make inferences.”

Michelle, the educational consultant, who provides academic support and holds workshops for teachers since its inception explained that though teaching methods have changed over the years, the emphasis on child-centred approach has remained. This year the teachers wanted to discuss the various components that contribute to an individual’s creativity as it would provide them with insights to plan and design classroom transactions to enhance their creativity.

The unique feature of Jhamtse is that there is an equal emphasis on academic and non-academic work including hands-on activities. The community believes that learning is not merely confined to gaining knowledge from books; hence the entire world is considered their classroom. Children learn essential life skills while actively participating in household and kitchen duties, sports, farming, going for walks, constructing buildings – the new wing which houses the office and hall bears testimony to the hard work put in by the children. In addition, an attempt is made to preserve Tibetan culture by having regular Tibetan classes including music and dance, praying sessions and celebrating the Tibetan festivals and functions. During my stay in Jhamtse, I witnessed the children’s enthusiasm while organizing a prayer session to commemorate the last day of the religious month and preparing for the Dalai Lama’s birthday celebrations with their dance and singing practices.

The medium of instruction is English, the children speak in English during school hours but after school hours, they speak Monpa, their native language. As Vasudha, the Managing Director, puts it, “Our aim is not to create confused people, rather children who would be equally at ease in both urban and rural spaces, to equip them with skills that would enable them to make informed choices and live life in harmony.”

A day in Jhamtse Gatsal
A typical weekday in the learning community begins in the wee hours of the morning; children start their day by cleaning the campus followed by either prayers or a walk. They have breakfast in the kitchen and get ready for school, which begins with the morning assembly. The classes go on till lunchtime interjected with a short mid-morning snack break. After lunch, they have co-curricular classes like sports, music, art-work followed by classes till the evening only for the older children. During sports, children play volleyball, table tennis, while in the drawing class, they draw and paint pictures with water colours accompanied by music playing in the background. In the evening, the children have half an hour of independent time, they can do what they feel like followed by a study hour till their dinner time at 7.15. 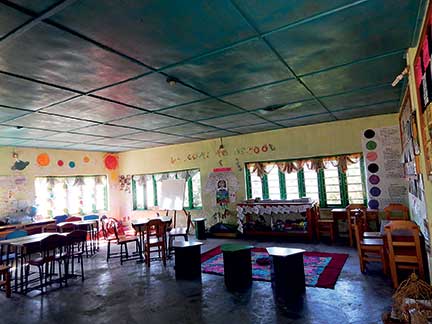 The individual behind the garden of love and compassion
I met its founder, Lobsang Phuntsok, a former Buddhist monk from Tawang on the last day of my visit. Lobsang had a difficult childhood, being packed off to a monastery in South India at a young age to learn Buddhism as his single mother and grandparents were unable to support him. After completing his studies, he travelled across the world to teach Buddhism. While travelling, he envisaged a safe sanctuary for those children in his homeland who had a similar fate, without the security of a home or modern education. With this vision, Jhamtse Gatsal was set up in 2006 to provide a home for 36 children who either had single parents, were orphans, abandoned or from financially unstable families. Lobsang believes, “There are two kinds of people in this world, one is either a seeker or a creator; initially I was seeking a home in different parts of the world, then I realized that I can create a home in my own homeland. Now Jhamtse has grown in numbers during the last 10 years and is in the cusp of great change, hence I urge everyone here to be creators.”

Jhamtse Gatsal has a tinge of surrealism to it. In a world which prizes competitiveness, thrives on individualism and materialism with contemporary social structures reflecting and perpetuating such values, it is an exception. Its belief in the principles of love and compassion is evident in its practice, the way the children, teachers and staff members greet each other with hugs, the open, friendly and non-hierarchical relationship between each other. Vasudha drove home this point when she said, “The skills required for our roles might be hierarchical but not our relationship with one another.” The community draws its strength from the rich cultural heritage of the people of this region and their ability to sustain themselves in tough geographical conditions. Saurabh states, “How can people here be termed as poor? Poverty cannot simply be defined in terms of its economic implications, in fact, we have to learn so much from them.”

The author is an educator and researcher who is deeply interested in exploring and practicing alternative methods of teaching and learning. She has been involved in developing curriculum, teaching children and mentoring teachers. She is, now setting up an organization consisting of, among other things, a learning centre in Guwahati, Assam. She can be reached at [email protected].