Over my 50 year-long uninterrupted teaching career (both before and post-retirement), my entire focus was on making teaching and learning as interesting as I possibly could. Thank God for gifting me with a good sense of humour! I could joke, laugh and scold too, to keep the students on their toes. I was teaching language, not from books, but out of books, because I was fully convinced that languages are meant to be spoken first and written later, unlike in schools where they are made to write even before they know what to speak. As a result, students cannot speak, read or write languages correctly. I am not only speaking of English, but all regional languages as well, in India, with Hindi, not as an exception. One seldom gets a student today, who can write any language without errors, be it spelling, punctuation, capital letters (where required) or grammatical errors.

This prompted me to experiment with children, not at their expense, but to their advantage.

Post-retirement, while working with an NGO in Andhra Pradesh for three years, I took to teaching English to rural children.

Integrated teaching is a very casual but interesting way of teaching. I had often told students that a language is a medium through which we learn many subjects. It is not a subject by itself; not at the school level definitely. Literature in that language is. But, try as I did, English and the regional languages were referred to as subjects, as is Sanskrit. I knew for a fact that sitting quietly in class and listening to the teacher read from a book could be the most boring lesson for a student. So I worked on an idea that struck me as unique and exciting.

I took the opportunity to explain to the students that to enjoy a lesson, they must learn to speak it and understand it, as much as to read and write it. I knew this was a difficult proposition. How could children who have never heard a sentence of spoken English outside their classrooms, speak the language? But I did not defer in my enthusiasm. I could give instructions only in English, so the students had little choice but to try and understand what I was saying.

So my lesson began. I requested the art teacher to draw for me on the board whatever I narrated to them. I selected some students as characters in my story. We were going to enact a story in English as a play, while I narrated it to them. All the other students were audience or participants. The story under fire was ‘The Rabbit and the Lion’. I was teaching grade 8.

The art teacher was instructed to make six squares using the entire blackboard. Initially, I also took the help of a teacher who could translate my English into Telugu. Once the students understood the story (which some of them were already familiar with) my session began.

There were no instructions given. The teacher had to draw and fill up the six squares, covering my entire story. The characters had to listen carefully and enact their parts spontaneously. The audience had to be attentive so as to understand the story.

So our roles began, with me as the narrator. 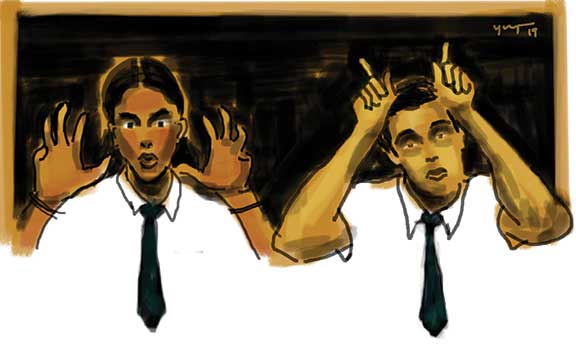 “There lived a lion in a very dense part of the jungle. He had grown old and could not kill his prey. As he was always hungry and unhappy, he decided to behave like ‘The King of the Jungle’ and command the animals. He called them all for a meeting and told them that since he was too old to kill and eat, he wanted one animal at a time to come to him, as food for him. Sitting together, they looked at each other and then at the lion, shivering and with fear on their faces. A small animal close to the lion began to cry. The lion filled with anger and hunger, caught him in his claws, tore him apart, and ate him up. Then, he went off to sleep.

The animals could think of nothing to avoid this plight, so in turn, they began to come to him each day, one by one, to be his prey. Afraid of the lion’s wrath, they always turned up on time.”

I made a quick pause here, to view the illustrations on the board. Perfect! A good job done! Then I looked at the characters. They were frisking about in the make-believe jungle, to be prey to the ‘King of the Jungle’.

“Then came the turn of a small rabbit. He made the lion wait a long time for his meal. He seemed to have a plan in his mind. Finally, he turned up. The lion roared loudly, with hunger and rage. Before he could pounce on the rabbit, the clever rabbit started speaking. In a shaky voice he informed the lion that there was another lion in the jungle who claimed to be the ‘King’. With great difficulty, he had managed to convince him otherwise.

“The lion’s pride was hurt and he wanted to fight the other lion. The clever rabbit took him to a well, saying that he was hiding there out of sheer fear. The lion peeped into the well and saw his reflection. Angrily, he roared loudly. The roar echoed. Thinking it was the other lion, he jumped into the well and drowned. All the animals who had survived, jumped for joy and rejoiced.”

As I looked at the blackboard, I was amused to see the artist’s imagination. In the last square there was a well and a splash of water over the low wall of the well.

My mind worked fast. The lion, in the class-drama had jumped into a dust bin, one leg dangling out.

Everybody clapped. They were amused and very excited.

Before the excitement could wane, I asked a student to get a jug full of water. Then I asked another child to fetch a stone that could take the size of the jug. I told a third child to drop the stone into the jug from a height. As he did so, I asked the class how they would account for the splash in ‘scientific terminology’.

After a few incorrect answers, one of the students very proudly said three words in English – ‘Displacement of Water’. I was so proud of him. And I was excited. I requested him to say that in telugu for the benefit of many students and then explain why the water splashed out. It was an extremely satisfying answer. “The stone takes the place of the water and the water has no space for itself and so is thrown out of the jug.” This was met with loud applause. The actors were in seventh heaven, the teacher’s sketches were highly appreciated and the excitement and understanding of the students was amazing. Each one had something to share with the other.

I put some questions to them on the entire lesson. They were allowed to answer in Telugu. I could never have imagined the eager hands that were raised to answer questions.

We had done art, Telugu, English, science, story-telling and drama and the whole class participated in one thing or the other. It WAS an integrated lesson in collaboration! And, needless to say, an enjoyable one.

Today, years after this and many more such experiences later, I have never been able to come back to the humdrum lessons of doing ‘chapters’ from textbooks, definitely not for language teaching!

The author is passionate about teaching and her varied experiences at different levels in different schools and colleges, in different states, add richness to the approach to her work. She also loves to teach out of the box. She can be reached at manjularao26@gmail.com.