“You say that to find the potential at a point in the vicinity of a charge, I must find out how much work I have to do to bring a one coulomb charge from very far away to that point?” the student asked. “Yes!” I replied, relieved that I had finally been able to get the point across, “and this is exactly the work that is stored in the unit charge as potential energy”. “But”, he protested, “isn’t the charge that’s already there going to push my unit charge back?” “Of course” I reply, muttering “here we go again” under my breath. “So it is going to do work on the unit charge, too?” he continues. Before I could retort, he went on “Then how does the unit charge know that it has to store the work that I do, not the one that the other charge does?”

This was a long time ago – I was in college, and was enjoying the financial freedom that came from giving private lessons to a few students in high school. Having just passed high school a few months ago, I was under the impression that I understood everything of higher secondary level physics. The question from the student shook me – I realized that even in the topics that we take for granted, there are still conceptual issues that need to be cleared – and they take the same amount of thought and effort, if not more, as the so-called “cutting edge topics”. With the passage of time, I have forgotten the name of that particular student, but the question has stuck. Even today, when I teach the topic of electric potential to a class, I make it a point to discuss this issue.

When I sat down to write this article, I was asking myself this question, “Why do I teach physics?” This is actually two questions, “Why physics?”, and “Why teach?” I will come back to the “Why physics?” later – but I am pretty sure that the epiphany that there are surprises and deep questions lurking in even this mundane topic that was inspired by the question this student raised a long time ago, was responsible for my other major epiphany – what I wanted to do for the rest of my life was, teach. To me, teaching is essentially a learning process, the best that there is. This was reinforced by my experience in college, where we had formed a study circle of sorts among friends. While what went on in these meetings was discussions on every topic under the sun – sports, movies, and (rarely) politics – we did sometimes find the time to actually study. I feel that the few hours I spent explaining the Laplace equation, or Boltzmann’s theory, to my peers did more to clarify my understanding of what I was saying than days of peering into books.

Today I am a reasonably competent teacher – not a very good one. For one thing, I speak way too fast. Even with a conscious effort, I can slow down my speech only to the extent that my class can follow me with some difficulty. I am not good at verbose explanations – I am much more comfortable when I have the support of an equation I can write down on the board, and take my cue from the symbols. Despite this, I do what I think is a fair job. The major reason for whatever success I have had is that I find physics difficult! I have to expend a great deal of effort to understand what I am teaching, and while I am at the blackboard, I vividly remember the things that struck me as complicated. If I had found physics easy, I wouldn’t have been able to anticipate the difficulties my students may have with what I am teaching them. My goal when I am teaching is to help my students understand the points on which I had got stuck myself, so that they can find things slightly easier than I had myself. One way I have managed to keep myself away from the danger of finding my material too easy is to pick up new topics to teach on a regular basis. With a few exceptions, I haven’t taught a topic for more than two-three years on the trot. I am sure most of you will agree that the best way to thoroughly learn a new topic is to teach it! 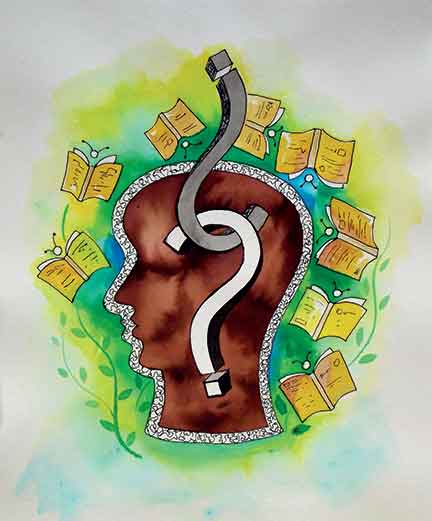 Some of you may feel uncomfortable admitting that what you teach is difficult. Let me explain. We humans have an understanding of the basic things physics deals with. We understand mass, length and time intuitively. Evolution has equipped us with senses that can cover a range of these parameters. However, the range of our understanding is limited – a human being cannot sense masses smaller than a few grams – neither do we have any instinctive understanding of very big masses. We may know, from having read somewhere, that the Great pyramid of Giza weighs in at about six million tonnes – but do we really understand that? I dare say that the largest mass that we “understand” is a few tens of kilos. Our sense of mass spreads over at most three or four orders of magnitude. Compare this with what physics deals with. The stage for physics spreads from the neutrino, whose mass is so tiny that we need to put in 37 zeros after the decimal place (in kgs), to the whole universe, whose mass is a 52 digit number (and that is just the part that we can see) – a total spread of around 90 orders of magnitude! The same goes for all the basic parameters – physics deals with an unimaginably large range of them compared to our puny senses. This is the power of physics, but this is also what makes it difficult to comprehend. Whenever a student asks me to explain “physically” some result from the world of quantum mechanics, I have to patiently explain what she is really trying to do is understand things in terms of concepts about the world she has picked up using her senses – and that these concepts are, at best inadequate, at worst misleading when applied to a world whose dimensions are so far away from our senses. It is important to stress that the fact that physics overreaches way beyond the confines of our senses, is what makes it so powerful, so useful, and so interesting!

I forgot to mention one other great benefit – it is the greatest anti-aging potion ever invented. In any other job you get older with your colleagues. It is only in teaching you get to meet a fresh batch of students every year. Dealing with the same age group year after year keeps you, at least mentally, at the same age as when you first joined up.

This does not mean that everything is perfect in the world of teaching. Far from it. For one thing, I find that in most cases the teaching is a bit too theory-oriented. Even there, most of the topics that are stressed may have been important 50 years ago. These topics are still important, but there have been many changes in the subject in the intervening years which are yet to be reflected in the curriculum. There are a lot of good people around who have given a lot of thought to the improvement of teaching, especially lab teaching, by introducing innovations – but their efforts have been isolated ones. There is a dire need for a forum, even an informal one, where people who care about teaching can interact and learn from one another. One reason why there have been no innovations in teaching is the inertia inherent in big institutions – maintaining the status quo is easy, and rendering effective change difficult. Sadly, even most of the autonomous institutions, which can easily usher in the necessary change, have chosen to play it safe and stick with the old methods rather than strike out in new directions.

As an example, I can point out that most physics courses today have a component of computing. However, the kind of computer lessons that the physics students get end up being no different from the kind that is taught to those aspiring for a career in computer sales. The computer can be a very important tool in the physics classroom. With a little effort, students can be trained to use the computer to enhance their understanding of physical phenomena – instead most courses tend to teach computing without any physics applications at all!

One more area that I find intolerable is that of the evaluation of teachers. Good teaching is, to an extent, subjective, and very hard to quantify. Unfortunately, today, quantification of performance has become an essential part of many walks of life, and teaching is no exception. What most administrations have chosen to do is to take the easy way out. Research output is easier to quantify than teaching, and so the number of papers a teacher has written becomes a measure of her worth as a teacher, rather than the number of students whose lives she has touched. Having taught in a standard degree college in the early part of my career, I know that if a teacher is to do full justice to her teaching load, it is nearly impossible to carry out quality research. I do know that a standard rejoinder to this complaint would be to say that doing research is essential for good teaching. I am sorry to sound harsh, but this seems to be a notion that has been coined by people who, never being able to teach properly themselves, have decided to move the goalpost to suit them. Of course, it is essential to do research to teach well – but to my mind the research that a teacher has to carry out in order to find a new way to understand and explain a well studied topic is much more important to the teaching process than the publication of a paper on a subject completely divorced from what she is teaching.

Despite the above, the decision to become a teacher was the best that I have taken. Even to this day, the adrenaline rush I feel when the scales drop and a hitherto vaguely understood concept becomes clear, the deep satisfaction that I feel when I manage to explain a difficult concept to my students and find that it makes my own understanding clearer, is a feeling that doesn’t compare with anything I could have got in any other job. So, I can be thankful that I do not have to work a single day of my life – since I am being paid to do the job that I love.

After all, I touch the future – I teach!

The author is an associate professor at IISER, Kolkata. His area of specialization is quantum phenomena. He has earlier taught at St. Xavier’s College and Jadavpur University. He can be reached at adg@iiserkol.ac.in.