Chemistry was not among Apoorva’s favourite subjects. Although she was an easy learner she found chemistry classes dull and boring. The subject never caught her attention and scoring decent marks in this subject was an uphill task for her. Apoorva is now in class 10 and when you ask her what her favourite subject is, her response, surprisingly, is “Chemistry!” The reason for this change is Indumati Srinath, Apoorva’s chemistry teacher.

Meera Verma is now a class 6 student and she loves performing on stage. But in nursery school, the stage was the last place she wanted to be. Once again, the reason for this dramatic change was Meera’s nursery teacher, Sujata Mishra. 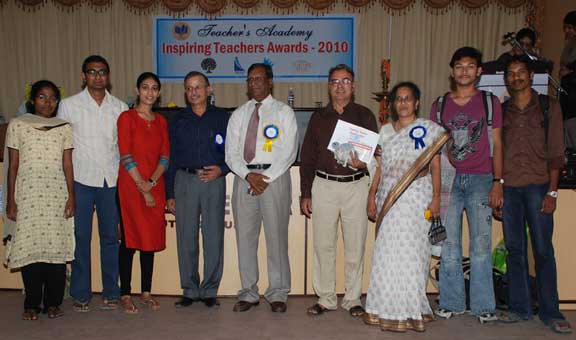 On October 2, 2010, teachers like Indumati Srinath and Sujata Mishra were felicitated at the Inspiring Teachers Awards ceremony organized by Teacher’s Academy in Hyderabad. Uma Garimella, founder and director of Teacher’s Academy says it was her deep desire to look at and appreciate all the good things in the world of teaching that led her to organize a teachers’ award. “All around us we hear of people only talking about the ills in the education system and while it is necessary to point out mistakes, I think we should also recognize the good that there is,” she says.

Teacher’s Academy is holding this function second year in a row now and it has grown in popularity since last year. The campaign for the awards started three months ago when Uma sent out online appeals asking students all over India to nominate teachers who have most inspired them, for the award. “I thought this was one way of showing our appreciation and thanking those teachers that have been most influential in our lives,” says Uma. The response that Teacher’s Academy received to this appeal was overwhelming and students young or old instantly liked the idea. Students who had long finished school or college and students who are still studying were all allowed to nominate their teachers. Bhavya who is now working in IOB in Chennai says, “This gave me a wonderful opportunity to get back in touch with my teacher Mr. ML Saikumar.” Many other students who attended the function to see the teachers they nominated receive awards were also of the same opinion. Student after student walked on stage to express their deep gratitude towards their ‘friend, philosopher, and guide’.

The Inspiring Teachers Awards not just brought students and teachers together but also brought teachers from different walks of life together. There were teachers from the army, nursery school, high school, colleges, and even games teachers. It was also heartening to note that a lot of teachers who are a part of Naandi’s ‘Ensuring Children Learn’ programme were felicitated during the function. ‘Akkas’ as they are called, these teachers spend two hours daily, after school, to teach children in government primary schools. These ‘tuition classes with a difference’ help many school children, who are otherwise not able to read or write, make progress in their education. Sukanya, a class 5 student in a government school, says her akka, Sajida Khatum is very patient with her and explains with great care, concepts and topics which she did not understand in school. Sajida’s intervention has actually helped Sukanya learn to read, something she found very difficult despite being in class five. Now, from all appearances, Sukanya, has a bright future.

In the Indian tradition the teacher occupies a very high pedestal. ‘Gurur Bramha, gurur Vishnu, gurur devo Maheshwara’ we say equating the guru to god. But in practice, teachers are the least respected lot in our society. As a young teacher at the function was saying, if young people enter the teaching profession, society likens them to losers who joined this profession only because they didn’t find work elsewhere. While society is quick to point fingers and show a teacher her flaws, she never gets credit when her students succeed.

This is why such efforts from organizations like Teacher’s Academy are very important. The Government of India has been recognizing meritorious teachers working in primary, middle and high schools by giving away the National Award for Teachers every year on September 5, since 1958. There are other organizations like Microsoft, Varkey Gems Foundation, the Centre for Cultural Resources and Training and even state governments as well that give away awards to teachers. But every bit of appreciation that a teacher receives encourages her to continue to strengthen the profession.

As the chief guest, Dr. S Nagabhushan Rao, Chairman, Institute of Engineers, AP Chapter mentioned in his opening remark, “A teacher destines the future of every student and honouring the teacher is honouring ourselves.”