Women have been fighting for equal rights for several centuries now; the ongoing battle, according to some, may continue to be waged well into the next millennium. To their credit, the so called ‘gentle sex’, who at one time had no role to play other than to look pretty (“Women are meant to be seen, not heard”), have notched up several notable victories – the right to vote, the right to an education, and the right to work. The common enemy in all the fights have been MEN, and the various manmade institutions created by them to keep women under their well-trodden heel. In the mid twentieth century, women in most English speaking countries found a new, and perhaps an unusual irritant to vent their spleen on – the English language. They argued that English was sexist; it was, in their opinion, an MCP! To set matters right, they took it upon themselves of making the language in which Shakespeare excelled, less gender biased. In the late 1960s and early 1970s, when the Women’s Liberation Movement was slowly gaining momentum and making front page news in most newspapers, words which had been part of the everyday language for centuries began to be put under the microscope, and their very existence questioned. A word which women took a serious objection to was ‘history’. An innocuous word in itself, but in the eyes of Gloria Steinem and her band of feminist sisters, it was yet another example of how male dominant the English language was. They argued that ‘history’ was the story of man; history, they said, was from ‘his story’. They were wrong of course, for the word has nothing to do with the pronoun ‘his’. History comes from the Greek ‘historia’, meaning ‘learning or learning by inquiry’. But the leading figures of the movement would have none of it, and insisted that the time had come for the story of the human race to be retold or rewritten from a woman’s perspective. They called this revised version, ‘herstory’. Soon, publication firms like Virago Press sprang up to give voice to the concerns of women. 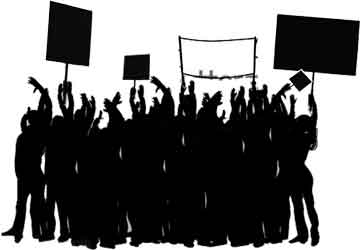 The Women’s Liberation Movement not only gave rise to a lot of new words, but also brought about alterations in existing ones. It was during this period that the famous ‘Ms.’ was coined. Women argued that the title ‘Mr.’ was a neutral term; based on the title, one would not be able to say with any degree of certainty whether the man in question was married or single. The titles which were used to address a woman – ’Mrs.’ and ‘Miss’, on the other hand, made no attempt to keep her marital state a secret. Women demanded a similar title for themselves, and they came up with ‘Ms’ (pronounced ‘miz’). In this age of ‘We are as good as you’, it is not surprising that the word ‘unisex’ was also coined. This rather turbulent period also saw the first bold attempts made to make the language gender free. Suffixes ‘-ess’ and ‘man’, for example, were deemed ‘sexist’ and they became the first casualty in the war against discrimination against women. In a matter of few years, these two suffixes were confined to the mothballs: actress, authoress, and poetess became actor, author, and poet. Women saw red whenever they came across a word which had ‘man’ as a suffix; it is not surprising therefore that this suffix too was soon guillotined: chairman and salesman became a gender neutral ‘chairperson’ and ‘salesperson’. It wasn’t long before ladies turned their guns on any word which contained ‘man’ in it, and proceeded to emasculate it: ‘mankind’ was changed to ‘humanity’, ‘manpower’ to ‘human resources’, ‘manmade’ to ‘artificial’, and ‘man the desk’ became ‘staff the desk’. The seeds of change had been sown; soon, any word that could be identified with either of the sexes found its head on the chopping block. Result? ‘Husband’ became ‘spouse’ and ‘wife’ became a much more respectable sounding ‘homemaker’. ‘Parenting’ and ‘nurturing’ replaced the old fashioned ‘mothering’.

Such types of changes continue to be made even today. It is now the age of political correctness, and people are taking ridiculously extraordinary measures to ensure they are not labelled sexist. A gender free word like ‘partner’ is being used to refer to both husband and wife. A few choose to employ the term ‘significant other’. Sometimes, the wife is given an honorary degree and is elevated to the status of a ‘domestic engineer’. A woman who functions as a secretary is now referred to as ‘administrative assistant’. Such changes have been made not only in the roles that we play, but also in the subjects that we study. Nowadays, it is no longer PC to refer to the subject of Home Science by its old name – after all, it is girls who specialize in this subject, and hence it becomes obligatory to give it a neutral term. It should come as no surprise that the title has been spruced up and now goes under the name ‘Family and Consumer Sciences’! Has a nice ring to it, don’t you think? Men are no longer MCPs, they merely have ‘swine empathy’, and the poor ‘manhole’ has become a ‘maintenance portal’ or ‘utility hole’. All these changes have been made in order to come up with gender neutral terms, and native speakers of English are going the extra mile to come up with them. Presently, the U.S. Government is making a concerted effort to remove the words ‘father’ and ‘mother’ from all application forms. They would like to have these words replaced by the terms ‘Parent 1’ and ‘Parent 2’. They call these impersonal terms “an improvement” over the emotionally laden terms ‘father’ and ‘mother’. In their website, the State Department claims: “These improvements are being made to provide gender neutral description of a child’s parents and in recognition of different types of families.” And who is to decide who Parent 1 is? Since this is the age of equality, I guess the ‘partners’ will have to put up their dukes and slug it out.