The recent publications of Kalpavriksh bring alive the Kachchh region of Gujarat to young readers and also take them inside a honeycomb to understand the ‘purpose in life’ of the honeybees. These stories teach children the importance of local species, the various eco-systems, and the value of teamwork, without turning didactic. 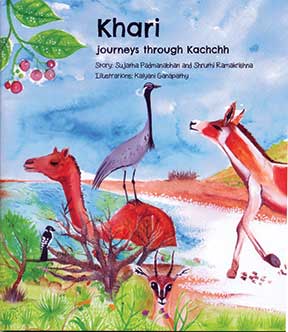 As an environment journalist, I have often referred to the research studies and technical reports prepared by Kalpavriksh, a Pune-based non-profit organization working on development and social issues. Thus, when I recently came across a set of three story books for children published by Kalpavriksh, I was pleasantly surprised. Bright, colourful, and creative with beautiful illustrations, the story books are a visual treat. The narrative of the stories is simple and friendly, which is sure to excite the children and make then turn page after page.

Interestingly, two story books – Khari Journeys through Kachchh, and Shero to the Rescue – are set in the Kachchh region of Gujarat, which is often thought of as a desert zone without much ecological significance. Shero to the Rescue, written by the famous environmentalist Ashish Kothari, is the story of a young hedgehog named Shero, who rallies together several animals living in the grasslands, wetlands, and the desert of Kachchh to fight against the district administration’s plan to set up a polluting factory in the area, which will not only destroy the land, but also a local water body. 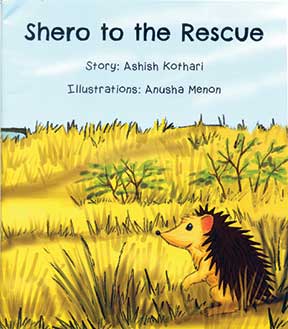 One at a time, Kothari introduces local animals to the young readers describing their unique habitat and food habits. Whereas Sherobabi (as her parents lovingly call her) nibbles at tasty lizards for dinner, Gho Uncle, a desert monitor lizard eats beetles and some eggs with its forked tongue. The story also describes the inter-dependence between various local species. For instance, Bagla, the cattle egret, is good friends with Pado, the big black buffalo, because the former often sits on the latter’s back to pick off ticks and insects from its body. All the animals come together and hatch a plan to fight the polluting factory. They are supported by the Maldharis, a nomadic tribal herding community in Gujarat whose culture is being pushed to extinction due to rapid progress in the area. Together they march to Bhuj to meet the district collector and get the project scrapped.

In the story of Khari Journeys through Kachchh, the reader takes a flight with little Khari, a young demoiselle crane who flies from Central Asia to the Indian Subcontinent as part of the annual migratory route. Khari is named after a river that flows through Kachchh, a land that she is very excited to see. Separated from her flock, she gets to see a variety of eco-systems in Kachchh ranging from the salty desert to the high land bets where plants grow. Khari visits the Banni grasslands that have been taken over by the foreign gando baval trees. She comes across communities that are native to Kachchh, such as Agariyas who make salt and the Maldhari herders. At the end of the story, Khari reunites with her family, but only after she has learnt all about the ecosystems of Kachchh.

These two story books on Kachchh are an outcome of environment education material that Kalpavriksh developed for schools in the Kachchh region along with local NGOs. These books are available in both Gujarati and English. 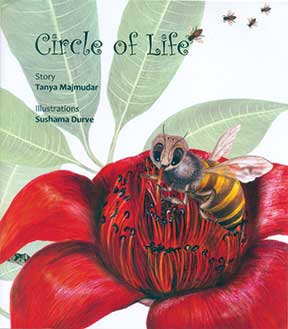 In the third story book, Circle of Life, the young readers peek into a honeycomb through the eyes of Fara, a young worker bee, who aspires to fly to a colourful meadow to suck fresh nectar from the flowers. The beehive has other hardworking fellow worker bees like Fara, the great Queen Mauri, drones (idle boy bees), foragers, etc. The beehive is a no-nonsense place with clear cut duties for each bee member. Everyone has a ‘purpose in life’. Take the case of Maumachi, a drone, whose purpose in life is to find a queen from a different colony and mate with her and die.

The story also discusses threats to honeybees from human beings who are destroying the forests. Fara and her fellow bees are forced to move out of their beehive and find a new home because trees are being cut and there is no safe place for the bees. Towards the end, the story book has a few pages dedicated to bee facts that tell readers the importance of bees in the lives of human beings. Circle of Life is an outcome of Kalpavriksh’s work in the Bhimashankar Wildlife Sanctuary in Maharashtra. It is available in both Marathi and English languages.

These three books, along with two more story books for children – Ghost of the Mountains, and Wildlife in a City Pond – are available for a cost of Rs 400.

The author is a freelance journalist from Mumbai who reports on the environment. She can be reached at nidhijamwal@yahoo.com.