Someone once said, “Speech was given to man to hide his thoughts.” While this may be a rather extreme view, there are indeed some people who – possibly in an attempt to spare one’s feelings – beat around the bush and allude to things so obliquely that you are never quite sure what their point is. On the other hand, there are people who are direct to the point of bluntness, and in so doing, tread on a lot of toes.

The way we say something can be just as important as what we say. How we speak to children, therefore, has a large effect on the degree of co-operation or enthusiasm we manage to elicit.

Here is an interesting experiment. Stand somewhere rather private (you don’t want people to think you are losing your marbles). Put your hand on your throat and say something in exactly the same way that you would if you were standing in front of your class. Does your throat vibrate? Now do the same thing with your hand on your upper chest. Does it vibrate this time?

This no doubt explains why, when I am feeling bossy and (unconsciously) talking with my ‘throat voice’, my pupils comply without engagement, and take every opportunity to drift off task or play up when my back is turned. Whereas when I am feeling mellow and relaxed, and speak with my ‘chest voice’, the pupils are ‘with me’ and willingly go along with what I want them to do.

As well as the kind of voice we use, our choice of words – how we express ourselves – is important. A child who is bombarded with commands, soon begins to feel powerless. He may need to regain some feeling of ‘power’, i.e., make himself/herself feel more important, by putting others down. This could be in the form of subtle comments or mean actions, or full scale bullying.

Often, the tone of a class as a whole is a good indication of how the teacher conveys his/her message. Are the children supportive of each other, inclusive, and peaceful, or are they always niggling each other, putting others down, jostling for superiority? If the latter is the case, maybe the teacher should listen to himself/herself as he/she talks to the class, and reflect on whether his/her method of delivery is a bossy ‘disempowering’ one.

Here are some ideas for modifying the way we talk to our pupils, so that they are ‘with us’ rather than obedient (if reluctant) servants. 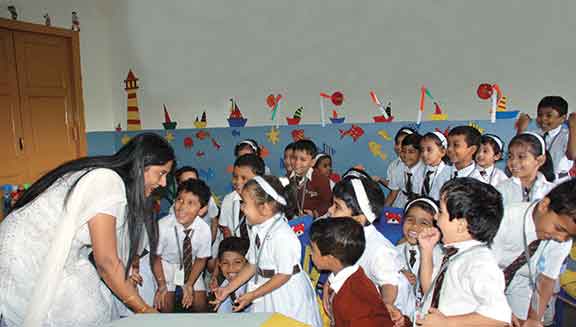 “I fold my hands that I may be
From all my work and play set free.
I ……………………” (in the language of your classroom of course – make up something that has rhythm and rhyme)

2) If they are doing something you don’t want them to do:

The language of team work
I had a very interesting experience the other day. I was taking 14 pupils from classes 3-5 for physical education. I divided them into two teams. Then I asked them to form three subgroups within each team. Group A did not listen, and made one group of four boys and one group of three girls. In Group B, one boy at once took charge, and started loudly issuing commands without consulting the others. (“He’s not giving us a say”, grumbled one unfortunate). My first reaction was: “Golly, he sounds just like a teacher.” Then the reality of my thought sank in. Is this what we teachers sound like? Is this the way we teach the children to be good future citizens? As if to confirm my thought, my assistant went over to Group A and began arbitrarily making the teams: “You two are one group. You three will be the second group and you two are the third.”

I believe that as educators, we must think beyond our own class situation and what is the easiest way to get what we want. We have a responsibility to give the children the tools they will need for their future life outside school. That includes especially the language needed to discuss, to include, to invite opinions, to negotiate, to work together, to solve, to resolve ………. And the only way the children will carry this within them is if we as teachers lead by example and practice what we preach.