I don’t think Gandhiji will be pleased to see what they have done to his ashram at Sevagram. Everything is manicured and tourist-ready and there is a souvenir shop. To top it all, there are small boards put up everywhere saying things like, ‘Gandhiji took his sunbath on this lawn’. The atma has left the place and only the immaculately preserved mummy exists. However, Gandhiji will be very happy to see Anand Niketan in the adjoining compound. This school, originally started in 1940 by Gandhiji to experiment with Nai Taleem and shut down in 1975, was revived in 2005 and is now doing very well.

Sushama Sharma, the head of Anand Niketan, was in the middle of working with some children when I reached the school. She told me that she could stop what she was doing because her time was flexible or that I could wait for half an hour. It was almost lunch time so I went, had lunch, and came back to find her free. Sushama is a soft-spoken, polite, gentle, and wise woman. During our walk around the school, many teachers and children spoke with her. Her tone with everyone, whether adult or child, was courteous and her interactions had the completeness of wisdom. It seemed as if Sushama was a part of everything happening in the school. As we were passing by a class, we heard some children talking loudly and laughing and stopped to ask what was going on. The children explained that some of their friends had not kept their footwear in the designated place outside the classroom and so they were teaching them a lesson – when these friends were away, the children in the classroom hid their chappals under some bushes in the garden. The children told Sushama all this as if she were part of their gang and would see the justness of their actions. I noticed that Sushama enjoyed the exchange but gave no adult value judgment like – ‘OK, after they learn their lesson please return their chappals‘; or ‘That is a good thing that you have done.’ Wisdom and compassion probably go together in people.

The school campus is spread out and the buildings are the same ones that Gandhiji walked through. I don’t know exactly what it is – the location next to the ashram, or the spread out buildings, or the large trees everywhere – but there is something utterly charming about this school. It felt like the farm, and the trees, and the buildings with their tiled roofs and the small and big people moving through it all fit into each other perfectly. There was a completeness to the picture; perhaps it was in the simplicity of the buildings and the people, or their connection with the local. (This is not an elite English medium school, the teachers and students speak Marathi all the time.)

Some things that stick out from my visit:

Let me wind up this impression with an excerpt from a story of how the old school used to be. 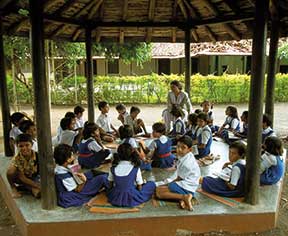 “Awaking early in the morning, the entire school community, consisting of its students and teachers, would undertake an hour’s safai (cleanliness) of the entire premises, including classrooms, dormitories, buildings, grounds, latrines. Time for bathing, washing clothes, and attending to personal cleanliness followed. The community then assembled for prayers, after which there was breakfast. Three hours of Sharir Shram (manual labour) formed an integral and perhaps the most important part of the curriculum. Here too, students and teachers worked together whether in the fields, or the spinning shed, or later, when the subject was introduced, in the mechanical engineering shed.

Study periods would be in the afternoons, after lunch and rest. No textbooks were followed, but all that was taught was related to the work done in the morning, not just math or economics, but science, social studies, language, literature also would be based on the work done. A session of games, in which students and teachers participated, helped to build an atmosphere of harmony and co-operation. At about 6.30 p.m., the entire ashram would meet for prayers. When Gandhiji was there he would always attend and on occasions, he would give a talk after prayers.”

Name of school: Anand Niketan, Sevagram, Wardha
Been around for: Restarted in 2005 at the original Nai Taleem campus that Mahatma Gandhi set up at his ashram in Sevagram in 1937. (The original school had shut down 40 or so years ago.)
Number of teachers/staff: 20 including balwadi teachers
Number of children: 110 including balwadi children
Classes handled: Pre-primary to class 9
USP: Continuation of Mahatma Gandhi’s Nai Taleem school
Approximate fees per child: Rs. 200 per month, but only 30 percent children can pay this amount
Location: Sevagram, Wardha
Website: http://www.nayeetaleem.org/