The first time I saw the entertaining Hollywood western, ‘The Quick and the Dead’ in 1996, the presence of the word ‘quick’ in the title did not strike me as being odd. Since the plot revolved around a competition to determine who the fastest gun in a small town was, I had assumed, rather naively I might add, that the word ‘quick’ referred to those who could ‘draw’ their weapon quickly. Those who did not manage to do so were the ones who ended up ‘dead’. Satisfied with this logical explanation, I didn’t give much thought to the title till I saw the film again nearly ten years later. Much as I enjoyed watching the Gene Hackman, Russell Crowe, Sharon Stone starrer all over again, something about the title kept nagging me, and this prompted me to consult a dictionary of etymology. I looked up the word ‘quick’ and I realized how clumsy my first interpretation had been. I learnt that the word ‘quick’ comes from the Old English ‘cwic’ and it originally meant ‘alive’ or ‘living’. So ‘The Quick and the Dead’ literally means ‘The Living and the Dead’ – it makes a lot more sense now, doesn’t it? With the passage of time, ‘quick’ began to acquire a very different meaning. It took nearly several centuries for it to acquire its present meaning related to speed. But, like many words in English, ‘quick’ has retained its original meaning in certain fixed expressions. 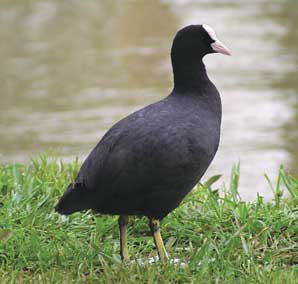 ‘Bald’ is another word that has retained its original meaning in certain contexts. We frequently use the expression ‘bald as a coot’ to refer to someone who has little or no hair. But how many of us know what a coot is? Bird lovers among us may know that a ‘coot’ is a rather small, dark bird usually found swimming in lakes and ponds. Like all birds, it has feathers covering its entire body, including its head. If this is the case, then why is this unfortunate bird often compared to an individual with no hair? A distinctive feature of the coot is that it has a white patch on its head, and it is for this reason that the bird was dubbed ‘bald coot’. One of the meanings of the word ‘bald’, which not many of us may be familiar with, is ‘marked with white’. The white spot on the coot’s head gave rise to the idiom ‘bald as a coot’. This also explains how the national emblem of the United States of America, the ‘bald eagle’, got its name. The body of this majestic bird is uniformly brown, but its head is covered with white feathers. From a distance, the white pate gives the impression the bird has no feathers on its head – like the coot, it looks bald!

Referring to various sources and picking up such crumbs of information often helps us to make sense of other words as well. Knowing that ‘quick’ means ‘living’, it becomes easy to understand how ‘quicksand’ got its name, and why the Romans dubbed mercury ‘quicksilver’. We know from films and books that when an individual falls into quicksand, he doesn’t sink to the bottom very quickly. The process of being sucked in is often an agonizingly slow and painful one. This particular sand was given its name because unlike other sand, it was alive (quick) – it was capable of slowly dragging you in. If sand can be ‘quick’, then why can’t metal? The Romans believed it was possible for metal to be a living substance as well, and that’s why they called mercury ‘argentum vivum’, meaning ‘living silver’. When the English translated this Latin term into their language, it became ‘quicksilver’. Mercury was given this name because this silver coloured metal was actually liquid in form, and being a liquid, it was capable of movement. This mobility gave the impression that it was ‘quick’, in other words, ‘alive’.

Like quicksand and mercury, language too is a ‘quick’ (living) entity. It keeps changing, and some of the old expressions provide evidence how much it has changed. When you take someone out to dinner, the expectations are you will play host and pay the bill. Your guest will expect you to pick up the tab or foot the bill. How does one actually foot the bill? Do you kick it? Believe it or not, the ‘foot’ in the expression has nothing to do with our feet. When a waiter requested you to ‘foot the bill’ in the 15th century, he wanted you to add up the figures and make sure that the total at the bottom or the foot of the bill was correct. The expression ‘foot up’, which is no longer in use, meant ‘count’ or ‘add up’. It was only in the 19th century that the expression ‘foot the bill’ began to mean what it does today.