One of the most important objectives of education is to make the student feel confident and good about herself. Therefore, self-image becomes important. Knowledge definitely enhances the self-image and confidence. But culture too plays an important part in the formation of the self-image. Let us closely examine what is generally happening in our country. Where does confidence come from and how is the self-image of the educated being formed?

Unfortunately today there is hardly any understanding of intrinsic confidence. The entire education system is focused on comparison. It starts in school, perhaps even before that, at home. From a very early stage, the child (unconsciously) learns, from the environment around, to compare (herself with the other). The image of the self is shaped by comparing with the other. The parents and the school both (consciously or unconsciously) encourage this tendency which very quickly becomes a deep conditioning from which an individual is seldom able to come out. This tendency to compare and evaluate and accordingly form a self image persists and creates a tension within, lifelong.

What lies behind this comparison? What is the basis on which the comparisons take place? The basis is not decided by the individual but by others, by the environment in which the individual lives. The individual is left with no choice to decide the basis on which to evaluate the self. This is not part of education today despite all the discussion around value education. So speaking good Sanskrit may have been the basis a thousand years ago, speaking good Persian (Farsi) 400 years ago and speaking good English in the present times. Wearing a beautiful dhoti or lungi perhaps was the basis at one time and wearing an expensive suit and tie (or jeans) in the present times.

The effort of education must be to empower the individual to set their own standards of excellence; standards which are beyond comparison. Education can develop the intellect of the student to differentiate between ‘what IS’ / the reality; the Being aspect / the inner; the intrinsic, in short the ‘sthiti’, and the manifested; what is seen; the appearance; the doing aspect, in other words, the ‘gati’. For instance, the meaning is the ‘sthiti’ which IS but the word is the expression (of the meaning), the ‘gati’. Feeling of respect is ‘sthiti’, but salutation is the expression of that, ‘gati’. Knowing or not knowing a particular topic is ‘sthiti’ but the score one gets in an exam is ‘gati’.

‘Gati’ can be false and inaccurate. The word used or the salutation or the marks one gets in the exam may not depict the exact state (the ‘sthiti’), the reality. In present times in the education system and in general, there is no discussion and no real understanding of the distinction between ‘sthiti’ and ‘gati’. Moreover ‘gati’ is considered to be real, while ignoring the genuine, the authentic, the real – ‘sthiti’ is ignored. Hence, the entire method of evaluation system either by the system or by individuals (of self and others) is all based on ‘gati’. And the child quickly gets conditioned to assume gati to be real and authentic and starts, inadvertently, ignoring sthiti.

If we can promote philosophy – in Sanskrit it is called Darshana, which means to see – as it IS, in the schools and colleges this problem can be addressed to some extent. We need to explain the differences between word and meaning, between ‘gati’ and ‘sthiti’, between the real and the manifested, between getting inspired (by the qualities, hidden, a part of being) and getting influenced (by gati), between listening (to the meaning) and hearing (the words), between (intrinsic) value and price, between being and doing or appearing, between knowledge (beyond space and time) and information (which is temporal), between education or the educated and literacy or the literate, etc.

Modernity is all about competition and comparison. Certain aspects of life, individual and collective, are promoted and highlighted to lure people to (mindlessly) follow those standards. This goes against the very idea of diversity and promotes standardization and universalization of the worst kind. The idea of ‘development’ and ‘progress’ has been usurped to follow others. This serves the objectives of the market as well. 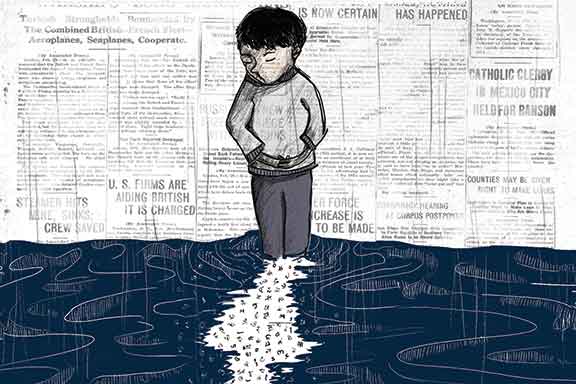 This country has suffered at the hands of our colonial masters who gave us a deep sense of inferiority and self consciousness towards our own (culture, language, lifestyle, etc). This needs to be addressed to improve our self-image and self-confidence. Thankfully we are still a diverse society despite the onslaught of modernity. The school must encourage that there is a difference between the objective and means. There can be no standardization of means. Our people have had different ways of perceiving the world, of communicating, of living and understanding and dealing with life.

Schools can design projects which encourage the students to discover the uniqueness of their own culture. For instance, every language (and dialect) has some unique features, words, expressions, proverbs, sayings, even words for colours, smells, objects, etc. Rajasthani for instance has several names for the colour white. They have different words for the colour of milk (white) and the colour of pearl (white), which are not found in other languages that have only one word for the colour white. Similarly, Kumaoni has many words to distinguish between different smells. Rajasthanis have different names for different clouds. The language of the Gonds has no curse words. The manner in which sentences, in our languages (including Tamil) and dialects are constructed, are also different from the way sentences are constructed in English and other languages. In our languages things ‘happen” whereas in European languages things are “done”. Also languages carry traditional folk knowledge in their idioms, proverbs and sayings.

A lot of wisdom in the area of food, health, dos and don’ts (behaviour), weather conditions, farming practices, about the behaviour and patterns in nature is embedded in the phrases, idioms and sayings in different languages. These are not only worth preserving but have to be examined closely. Our traditional knowledge is based on observing patterns in Nature – how different events, apparently unconnected, are actually related. For instance, the part of the tree (high up or in the middle) where the crow makes its nest gives an indication to the farmer in the month of February/March (that is when crows lay their eggs) whether it is going to be a good monsoon or not (still about three months away; monsoons start around mid June) in a particular year. Our languages are full of such knowledge developed over centuries by sheer observation of nature. Traditional knowledge is mostly empirical and can be easily verified. We can do projects on local dialects and languages to elicit local wisdom and the traditional knowledge system. This will instill confidence in our people and get them to appreciate their culture and traditional knowledge.

The (hidden) assumptions or conditioning which prompts us to jump to conclusions without examination, needs to be challenged. The blind faith in anything termed as scientific and the rejection of anything termed traditional, the faith in media (specially the English media) reports, in technology, in information coming from the western world, is all pervasive. All these tendencies need to be first observed and then challenged effectively. In our schools in SIDH we were reasonably successful in this effort. This resulted in the student having more confidence in herself, in not coming easily under the influence of the other, developing a sense of healthy respect for their own (culture and wisdom) and ultimately being comfortable with themselves.

The author’s ideas were formed by listening to village elders and reading Mahatma Gandhi’s collected works. He is interested in knowing what is Indianess, understanding the wisdom and value system of the ordinary illiterate Indian and traditional knowledge. He can be reached at pawansidh@gmail.com.