Part of a series of lectures for school children, this work recaptures the brilliance of Michael Faraday not only as a gifted communicator but also as a meticulous experimentalist who tested and tried every demonstration that he was going to show the children. 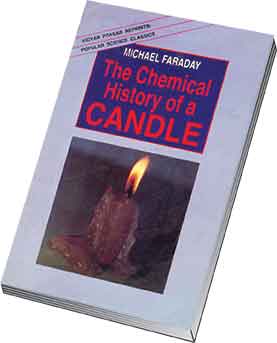 Science just passed me by when I was at school and I let it happen with no regrets. Our school had the notion that by age 12 or 13, we should be divided into a science and a not-so-science stream. Predictably, the former were the A section! Years rolled by and by a twist of fate, I was married to a man who felt that science was a thing of beauty and a joy forever. Later as a school librarian, I was lucky to have colleagues who suggested interesting readings in science. I now had the curiosity and urge to read more about scientists and their work, such as came within my understanding. So when I read a passing reference to a set of Christmas lectures that the outstanding chemist and physicist, Michael Faraday, had delivered to schoolchildren, called “The Chemical History of a Candle,” my antennae went up. After confabulations with my chemist-colleague, we discovered that Vigyan Prasar had brought it out in a very accessible little book for just Rs. 35.

Lectures and live demonstrations as a way of communicating knowledge and passion can be so powerful that it seems a shame it has gone out of fashion. Individualized learning, excellent and child-friendly books are no doubt a boon but where is the drama of direct contact with genius? Richard Feynmann, the gifted physicist gave a set of lectures which were published as books. These are even now the first and best reading for a budding physicist. Perhaps the Ted Talks are the current equivalent but they seem like teaser trailers when you compare them with the methodical and yet passionate lectures presented by Michael Faraday. He was not a natural orator but felt the vital importance of communicating directly to young people and adults. So he set about learning how to be an effective speaker and even put down some guidelines. Here is one of them. “A lecturer should appear easy and collected, undaunted and unconcerned, his thoughts about him and his mind clear for the contemplation and description of the subject. His action should be slow, easy and natural, consisting principally in changes of the posture of the body, in order to avoid the air of stiffness.” Good advice for all teachers!

Michael Faraday was born in 1791 and grew up in a slum in London, England. His family was so poor that one loaf of bread had to last for a whole week. He went to a very ordinary school where he learnt the basics in reading, writing, and arithmetic. At a young age, he went to work for a book binder where many books especially large tomes like encyclopedias and scientific books came in for binding. That opened up a world he was thirsting to discover. No worthwhile book on science passed through the shop without being devoured by young Michael. One day, his employer was invited to an evening lecture by Humphry Davy, a renowned scientist. Knowing the boy’s craze for science, he gave his pass to Michael and the rest is history …or should we say science?! Davy was a brilliant speaker and Michael took careful notes of all the lectures. He then sent these to Davy who was so impressed with his observation and organization that he invited Michael to work with him. Perhaps Faraday never forgot his own response to Davy’s mode of communication because in later life, he regularly lectured on Friday evenings to the general public and later gave a special set of Christmas lectures for schoolchildren. These lectures were taken down by a stenographer and have been reproduced verbatim. There is a charm about this because often you will hear him say, “….and now my boys and girls….” Would you believe he and his wife never had children of their own and yet he speaks to young people directly in the voice of a young person himself?

In this set of six lectures he gave to school children during the Christmas holidays of 1860-61, we can recapture the brilliance of Michael Faraday, not only as a gifted communicator but also as a meticulous experimentalist who tested and tried every demonstration he was going to show the children. “In early life I was a very lively, imaginative person who could believe in the Arabian Nights as easily as the Encyclopedia but facts were important to me and that saved me. I was never able to make a fact my own without seeing it” he says. This is what he wished to show and share with the school children who came to listen and to watch. For these lectures, he chose the simple candle as his theme to convey some startling insights into the nature of substances, their origin, properties, usefulness to human life, and ways to identify them. “From the humble candle, he evokes a world of science, for himself as much as for his youthful audience,” says a biographer, William H. Cropper. What was fascinating was that he could enable a lay person like me to feel the excitement of the discoveries he seemed to make right there in the auditorium. Heady stuff!

The humble candle
In the first lecture, Michael Faraday reflects on the wonders of the humble candle and the necessary conditions to make it light up. It needs fuel, a means to bring that fuel up to the place of chemical action, i.e., the flame, and it also needs regular and gradual supply of air to that place of action as well as heat and light. For example, how many of us know the composition of a candle? We probably have an idea that it consists of strips of cotton which is dipped in hot wax until we have the familiar shape of the candle, but do we ever wonder how the wax moves up the wick to the point of lighting up? He exhorts his listeners to ask why – what is the cause – and in time the answer will come, he says. The nature of the flame too is special. “It is bright, oblong, brighter at the top than towards the bottom.” It has a multitude of shapes succeeding each other so fast that we can only see them as one shape. Each of these observations and questions leads to the unfolding of many more discoveries.

The second lecture goes into the wonder of what happens in any particular part of the flame, why it happens and what it does in happening. Where does the whole candle go to?! The role of air in keeping a candle alight is uncovered.

In the third lecture we are introduced to the wonders of water. For me, it was a revelation that all combustible substances seem to produce water if they burn with a flame and that water is the same thing whether produced by combustion, from a flame or from rivers and seas.

The start of the 4th lecture gives us a glimpse of the response of the audience, “I see you are not tired of the candle yet. Or I am sure you would not be interested in the subject the way you are.” In this and the next lecture, we learn more about oxygen and nitrogen. Who knew (not me!) that nitrogen which seems lifeless and useless is actually performing a vital job. Combining with oxygen it makes it safe for us to breathe. Think what it would be like if it was not there.

All these amazing facts are shown to us slowly and clearly through actual demonstrations so that the lectures are mere articulations of what we are seeing and understanding. “Train of reasoning is very important. Be attentive to that and never lose it for a moment,” he says to his listeners. We are introduced to the elements in dramatic fashion, a show of sound and light and learn what magic results when some of them are combined. We even learn how to separate them again! We feel we now ‘know’ air, water, oxygen, hydrogen, carbon dioxide, nitrogen, sulfur and a host of magical characters as if they are our next-door neighbours, perhaps better!

In the last lecture and I am not giving away the ending, (!) Faraday wraps up by telling us how combustion is going on in each one of us. He draws the analogy between respiration and combustion. All the actions and reactions he spoke about in the earlier lectures are true for our insides as well, and that gives the reader a sense of oneness with the universe.

The language may sound old-fashioned and quaint but the discoveries and the facts are timeless. The book has a short section of explanatory notes at the back which is very useful to check if you have forgotten which element is which. There are simple drawings of the apparatus used which may make you chuckle but I am sure they will give ideas on using such simple methods yourselves. This book and many other simple classics like this one can be ordered from the website of Vigyan Prasar at www.vigyanprasar.gov.in. I would urge every school library not only to have a copy or two on their shelves but also ensure that they are being read and used by teachers and students.

At the end Michael Faraday’s words to his young audience are very moving. “All I can say to you….is to express a wish that you may… be fit to compare to a candle; that you may like it, shine as lights to those about you.”

“I am no poet but if you think for yourselves, as I proceed, the facts will form a poem in your minds.” – Michael Faraday.

The author has worked happily with books and children for 30 years and in the process has discovered many wonderful books and authors which has helped her grow. She can be reached at usha.mukunda@gmail.com.