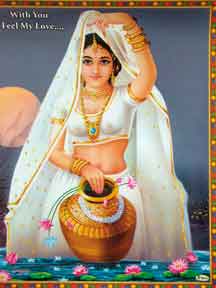 These colourful posters are a ubiquitous sight in the cities and towns of India; they form a genre of popular art now known as ‘calendar art’. It would not be an exaggeration to claim that these posters have shaped the visual imagination of generations of Indians living in cities and towns. For example, how many of us can conjure up a mental picture of Bhagat Singh or the goddess Lakshmi without the calendar version of their likenesses influencing our vision?

The power of images
Though they’ve been around in one form or the other for more than a century (Ravi Varma’s oleographs were an early form of this popular genre), these popular prints were never considered worthy of academic attention until the 1990s. Today, with Visual Culture Studies being all the rage in anthropology and art history departments, looking at and writing about calendar art has become entirely respectable. There are entire doctoral theses, books, even websites dedicated to calendar art.

Academics are only now beginning to acknowledge what diverse cultures have known for millennia – the persuasive power of images. It does not matter whether the image is ‘art’ or not, whether or not it conforms to some high standards of aesthetic or symbolic significance. Images are capable of enchanting, persuading, convincing, seducing, brainwashing, misleading entire populations; capable of changing minds, perpetuating stereotypes, encapsulating and communicating entire ideologies and world views – often in unnoticed and subliminal ways.

The author teaches art history at the University of Hyderabad. She can be reached at sarada.natarajan@gmail.com.