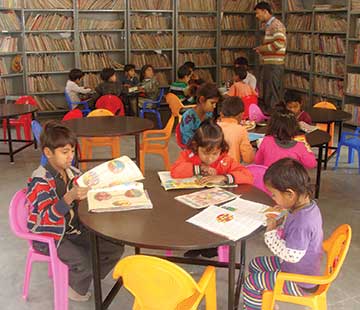 A young couple, Rohit Dhankar, working towards his Ph.D in Mathematics and Reena Das getting ready to write her Ph.D thesis in Sociology were approached by a friend who wanted a couple to run a new school for him. The friend wanted the couple to be trained by the visionary educator David Horsburgh, whose village school Neel Bagh, 100 kilometers from Bangalore, was the Mecca for alternative schooling in India. For Rohit and Reena, who took up the offer, the time they spent with David at Neel Bagh was transformational. Coming from a background of mainstream schooling, David’s class-less, teacher-less, curriculum-less school with its emphasis on learning by doing, was a real eye opener. They came back to Jaipur inspired, and without waiting to finish their doctoral degrees, they started Digantar with seven children in 1978. Reena told me that her father, who was an army doctor, never forgave her for not becoming the college professor he thought she had almost become. Telling him that she wanted to spend all her time with children and didn’t need a Ph.D for that was no good and he never understood how she could so casually throw away all the hard work that she had put in. 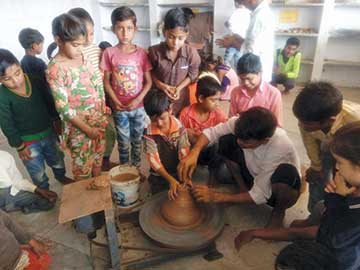 The elementary school stayed with some 25 students for ten years or so before Rohit and Reena decided to expand their circle of influence to rural children. Digantar Shiksha evam Khel Kud Samiti was registered in 1987 and today they run three schools catering to 600 children on the rural outskirts of Jaipur. To give you an idea of how different these schools are, here is a partial list from their website:

I have been to some gatherings that Rohit has been a participant in and every time I have been awed by his encyclopedic knowledge about all aspects of education, especially about the philosophy of education. (I have walked through the library at Digantar and know that it is not only philosophy he is interested in). I also noticed that only the brave, or people who know him very well, dare to take him up on an argument. He is extremely incisive and whatever side I start on, I notice that most times when his opponent finally gives in, I for one am definitely seeing Rohit’s point of view. I think this is a sign of great authenticity and not of great persuasiveness or scholarship. Rohit commands great respect in the world of school education in India. 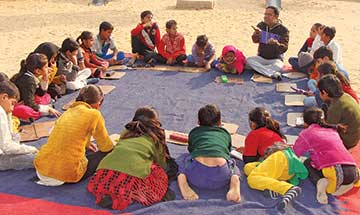 He was not there when I recently went to Jaipur and took my autowallah down the 200 metre kutcha road leading to the gate of their beautiful five-acre office complex. (The schools are a further six km away from here). But a pleasant, smiling, slightly – built, and very fit Reena was there and I took an instant liking to her. Finding out that I had come by an overnight bus from Delhi, and before that by a 48-hour train journey from Kerala, and that I had come to Jaipur only to meet her (of course, without an appointment), she gave me a lot of her precious time. She showed me around the office and other buildings that house the various programmes that Digantar runs. These include:

I hope that gives an idea of the uniqueness and comprehensiveness of the vision of Digantar’s work in education. Let me conclude with some appropriate words from their website.