Have you noticed how frequently discussions in the staff room gradually but inexorably gravitate towards the topic of student misbehaviour? Misbehaviour can be irritating and annoying, to say the least, and can waste an awful lot of class time. Many teachers find that willful disobedience on the part of the child is the most difficult kind of misbehaviour to deal with. I suggest that part of the reason for this is that disobedience normally provokes an emotional response in the teacher, such as frustration and anger. Instead of ACTING in calmness and objectivity, he REacts in anger, sometimes out of proportion to the child’s act. This can lead to a situation of conflict and confrontation, where the prospect of resolution quickly fades. To avoid this, it can be enormously helpful to try and figure out WHY a child is not obeying our requests. This will help to deal with each situation in the most appropriate way without losing one’s temper.

Some reasons for children’s disobedience are:

Note: If you do nothing, the child will know that he doesn’t have to do what you ask. 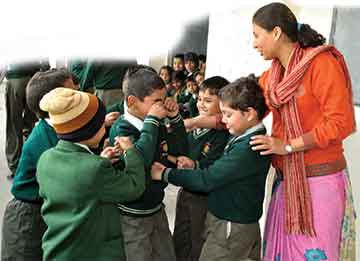 When a child disobeys, it will probably be for a combination of two, three, or even four of the above reasons.

Example 1: Independence. All children were asked to leave the room walking slowly. Two or three boys ran. Their attitude was: “I’m a big, independent boy now, I don’t have to do what the teacher says.”

Example 2: Power. A girl (4 yrs old) was in the habit of always disturbing other children during rest time. A volunteer asked her to sit beside her (the volunteer). The girl just grinned cheekily at the volunteer with the expression on her face that said, “I have no intention of doing what you ask – what are you going to do about it?” This is a classic example of the power scenario.

Example 3: Saving face. One girl was the last to finish her worksheet. Two boys tried to take away her crayons and table before she had finished. The teacher asked them to wait. To show that they were not going to give up that easily, the boys leaned with their hands on the table, crowding the girl (=first show of strength to save face). The teacher made them step away. Still they did not give up, but again crowded the girl by leaning on the table (=second show of strength to save face).

In any case of disobedience, confrontation by the adult usually leads to increased resistance from the child, so it is not a good first approach – though it is important that in the end, the child recognizes that you are still the boss. Best may be an increasing level of reactions by the teacher. You may decide to give the child an easy way out (Level 1), or start straight away with Level 2 or 3, or even Level 4, especially if the child has been corrected on this subject before. For example, for ‘Independence’ and ‘Saving face’, Level 1 might be enough. For ‘Power’, Level 4. Find what works best for you – and what works best for each child, as each child responds differently.

Level 1: Defuse the Situation
– Give them the opportunity to save face:

• Make the activity attractive/special so the ones who don’t want to do it will feel they are missing out.

Level 2: Assert your authority in a warm way

Level 3: Become very firm
In example 3 above, when the boys displayed their strength for the second time by leaning on the table, they were being disobedient despite knowing very well what was expected of them.

Level 4: Consequences
One of the most interesting things for some children is to find out what you are going to do about a problem they are causing.

In their home situation, the consequences for non-compliance may be the kind of thing that we want to avoid. Nevertheless there has to be some consequence for bad behaviour, especially if it is repeated, or if the child willfully disobeys what he has been asked to do or what he knows perfectly well is expected of him. But on the other hand, you don’t want to make an enemy of your students with lots of punishments. The consequence doesn’t always have to be a ‘punishment’, but if there is no consequence, the child will keep doing it. The consequence doesn’t even have to be a big consequence, it can be quite a small consequence, as long as there is something.
– Sit apart from the others?
– Go to the end of the line?
– Miss out on an activity? Or do a boring task instead of what the others are doing?
– Sit in the classroom at break time for 5 minutes without doing or saying anything?
– Write a letter of apology?

It must be painful (the least important), immediate, and in keeping with the problem. CHILDREN MUST KNOW THAT IT WILL HAPPEN. 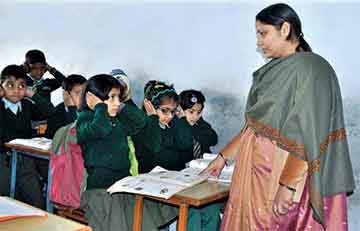 Example: In example 1 above (boys running instead of walking) you could call back the boys who ran and either make them wait till last, or make them sit for two minutes to think about their behaviour before joining the others.

Younger children
Normally it is counterproductive to physically push/pull/move a child around, as it reinforces that you are the boss/bully who is only getting your way because you are stronger. Nevertheless, for a younger child Level 4 could be an occasion where physical force may be appropriate – not violence of course, but using your superior strength. (It is more appropriate for a young child because one cannot appeal to his reason to the same extent as an older one who is more open to the principles of fairness, justice and rules). But the key is that it must be done with respect for the child.

Example: In Example 2 above (the girl who was disturbing others during rest time), when the girl cheekily challenged the volunteer (“what are you going to do about it?”), the volunteer walked over and picked the girl up and took her to sit at the side of the room beside the volunteer. The girl made a huge fuss, crying and struggling. The volunteer took her outside and sat her on her lap, looking at her lovingly. The girl continued struggling and crying, arching her back in a typical attention-getting ‘tantrum’. After some time, she looked at the volunteer and was completely confused by the loving look. ‘Hey, that’s not right. You are supposed to be angry and then I can have a temper tantrum. But what do I do in this case?” The interesting thing is that the next day, the girl was perfectly well behaved in rest time, and when another child was disturbing, she turned around and told him to sshh!! From that day on the girl did not misbehave again in rest time. She was also particularly friendly to the volunteer.

This example shows that if you can be firm in a loving way, the child does not dislike you (something teachers may fear and therefore hesitate to be strong). On the contrary, the child has found in you the strength he/she has been looking for, and this draws him/her to respect and like you more. I have experienced this many times: the day after a very firm reprimand, the child is often waiting at the gate for me, with a huge smile or a gift of a banana.

To quickly interpret a situation and successfully respond in the most appropriate way is hugely challenging. Teachers need to strike a delicate balance between:

Remember, once you are reacting out of emotion or anger, you have lost control of yourself and therefore also of the situation. Calmness and a deep understanding of each individual child will make dealing with disobedience much less of an antagonistic upheaval.