In this edition of Teaching and Learning Moments with Teacher Plus, Amandeep Sandhu talks about his journey towards becoming a writer and why it is important to create and nurture voices that are difficult to appropriate in these times.

It was in 2010 that I read Amandeep Sandhu’s first novel Sepia Leaves. I remember putting it aside after the first few pages and becoming extremely uncomfortable. I felt that if I read the book something would drastically change in my life. And I knew I wasn’t prepared for any change at that point. But I couldn’t keep myself away from the book for too long and by next morning, I had turned its last page.

Aman’s books deal with tough issues. His first novel Sepia Leaves is about schizophrenia from a child care giver’s perspective. His second novel Roll of Honour is about the split loyalties of a Sikh adolescent in a military school when separatist violence raged in Punjab through the 1980s. What strikes you most about his books is Aman’s honest, deadpan writing. Yet, in many ways he remains tender, kind.

Aman started his career as a journalist in The Economic Times but after two years shifted to Information Technology. Roll of Honour was nominated for The Hindu Award 2013. Aman was a Fellow at Akademie Schloss Solitude, Stuttgart and is currently working full time on his non-fiction book Punjab – Journeys through Fault Lines.

Here is an excerpt from the interview with Amandeep Sandhu: 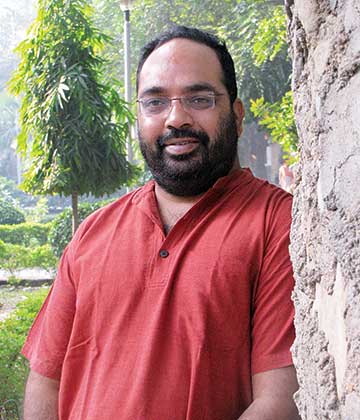 Early Childhood
I was born in Rourkela, Orissa. It was a town where, for the first time, India was experimenting with the socialistic structure of living. We had sectors, homes, and streets where our neighbours did not understand our language or our traditions. It was a place where Jawaharlal Nehru and the makers of the country were trying to create the temples of modern India. But there was a particular problem in my family which normally would have been buried in the joint family system of Punjab, but here it was out in relief. Everybody could see that my mother was mentally ill. And though I could speak almost six languages, I did not have a language to communicate our issues to the community we lived in. We, as a family started ‘being’ the way they looked at us; which was mostly with pity, sympathy, a way in which we were diminished in their eyes. So I grew up with a feeling of not being understood by the world that I lived in.

Starting to write
Well, I don’t know when I decided to become a writer. But I always knew that I wanted to be a reader. Even as a child, when my parents would have fights, I would hide away with comic books behind the sofa. When I went to the military school and saw the external emphasis on discipline and order, I thought maybe someday I would be able to write about it, to make sense of it. So the need to write came from the feeling that I am not understood. At that point I wanted the world to understand me. But soon, I didn’t care. Yet, I didn’t want the world to smother me with its gaze, appropriate me. Through my adolescence I would look at blank sheets of paper and cry. I finally started to write when I was about 29 years old. Slowly, I discovered my voice.

A voice beyond appropriation
Today, the human being is most vulnerable and is in most danger of being appropriated by external powers. Whether it’s a nation state, or a political discourse or a religious identity or if it’s a question of language or of gender or of caste, all these are supra-narratives that will want to appropriate your voice. So the big effort in today’s age is to create a voice that cannot be easily appropriated. And that is what I try to teach my students.

The author is an educator based in Bengaluru. She can be reached at lakshmikarunakaran@gmail.com.