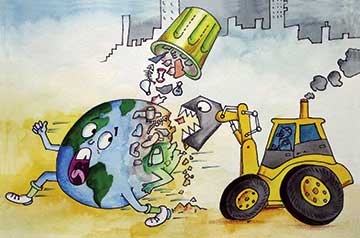 When we think about the Earth, we might visualize it as a blue planet circling about in space, along with other planets, stars, and celestial bodies – a small piece of the universe that is our home. Look a little closer at it, as if you were coming in to land on it in a spaceship, and you would see continents and seas, mountains and rivers, deserts and forests… This Earth of ours has been around for millions of years, changing inexorably, although it’s at a pace that is very slow for us to recognize on an everyday basis. Its tectonic plates move, and masses of land have broken up to form continents. Sometimes it has cooled down so much that it has been completely covered with ice, while at other times, it has warmed up and sea levels have risen.

Those changes, however, are on a timeframe that is to be counted in millions of years. What of the changes which are within the timeframe of the ordinary life-span of a human being, say 70 – 80 years? Have human beings caused any considerable geographic modifications to this Earth? Well, we certainly have: whether by chance or by design, we’ve brought about many geophysical changes.

Small mistakes, huge consequences
The Earth holds lots of treasures that human beings want to use or exploit for gain: oil, metals or minerals, we depend on the Earth to supply our needs. We mine these from the Earth, riddling it with tunnels and huge caverns.

In Louisiana in the US, one such mine was established for the extraction of salt in 1919. By 1980, it had expanded into a huge network of tunnels and caverns, with some of them running right under the nearby Lake Peigneur, a wide but shallow lake just over 10 feet deep. This was the time when an oil and gas company began some exploratory drilling on the lake bed. Although taking great care to avoid the mine, a miscalculation occurred, and a hole 14 inches wide was accidentally drilled right into the mine. It’s easy to guess what happened next: the lake’s waters were sucked into the hole, creating a vortex as the salt underneath dissolved. A huge sinkhole was created, and within a few hours, the drilling rig, several other barges, and many acres of the surrounding land were pulled down by the force of the whirling waters!

The author is a writer and research scholar at EFL University, Hyderabad. She can be reached at sheel.sheel@gmail.com.