“Where there is a circle, there is pi”. Pi is the most popular and frequently used mathematical constant in different fields such as mathematics, engineering, and in physics. Though defined as the ratio between the circumference and diameter of a circle, it is not a rational number. It is neither a recurring decimal with the digits after the decimal point extending to more than a quadrillion. 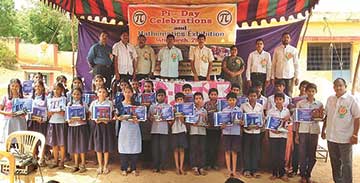 The first one was a mathematics quiz from the children’s class syllabus, ie from class 6 to 10. The second one was a drawing competition in which the children had to draw any picture of their choice but using only geometrical shapes like triangles, rectangles, squares, rhombus, circle and hemisphere. The third was a competition of reciting the digits in the decimal expansion of pi.

Though 90 per cent of the school children are from BPL families, they are not short of talent. The pictures they drew were really amazing. It was very difficult for the judges to select the winners from the drawings. 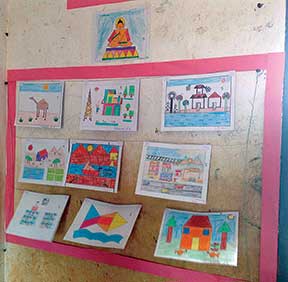 The meeting was presided over by our Head Master, Mr. Y. Nageswara Rao. Other teachers who lent support include Mr. S.R.K. Ravikumar and Mr. C.P. Vijaya Kumar.

The author is a mathematics teacher at GPR, Zilla Praja Parishad High School, Bommuru village, Rajahmundry rural mandal of East Godavari District. He can be reached at jaitwinki@gmail.com.