Very early in my journey as a teacher I realized that “engagement” is critical to learning. If students are not engaged in the classroom, it is unlikely that they are learning.

One of the indicators of engagement, to my mind, is participation. Classroom participation is the soul of a productive classroom. The liveliness and efficiency of a classroom is portrayed through the level of participation of the class during an interaction.

As I walked into my new classroom and faced a new bunch of students, I found that classroom participation was very low. This got me thinking of the possible reasons for low participation. As I read up on this issue, I found quite a number of possible reasons. My list looked something like this:
• Geographical setting
• Lack of confidence
• Monotonous classroom
• Poor vocabulary

From the above list, I felt poor vocabulary to be the most critical reason as far as my students were concerned. Most of the students, being first generation learners were short of English vocabulary, which resulted in a lack of confidence to participate in the classroom discussions. Therefore, I decided to work on vocabulary enhancement to increase my students’ classroom participation.

My next challenge was to figure out appropriate strategies for vocabulary enhancement for 5th grade students. I zeroed in on four strategies, which I felt would be most appropriate for my students. The strategies were:
• Semantic map
• Flip-a-chip
• Vocabulary wall
• Treasure hunt

These four strategies were used in the same sequence, each for 1-2 weeks.

Semantic map is a graphic organizer that helps students visually organize the relationship among various pieces of information. Initially, I provided students with words from the textbook along with their meanings. A little later, I provided synonyms and antonyms, as well as the root word. Towards the end of the class, there was a graphic organizer of the main word with its synonym, antonym and root word, along with its meaning on the board.

For example, students started with 10 words from a chapter along with their meanings in the beginning of the week. In the course of classroom transaction, I provided students with the synonyms and antonyms, along with the root word of the main word. Students noted it down in their notebooks. At the end of each period, students made a graphic organizer. After every four days, the students were asked to make graphic organizers of all the words, synonyms, antonyms and root words for a better understanding of the same. 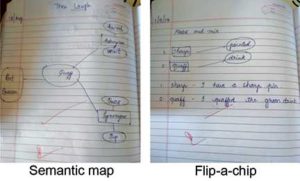 In Flip-A-Chip, each pair of students was given four chits of words. The chits had two words and their synonyms, which they had to match based on their prior knowledge. After discussing words and matching them, they made sentences with the given words. For example, a pair of students was given four words, sharp, quaff, pointed and drink. The students were given two minutes to match the words with their synonyms. After they matched the words, I, as a facilitator, checked the match for its correctness. Thereafter, students were asked to make sentences with each word. 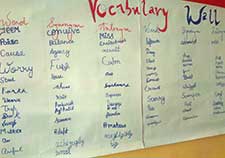 In Vocabulary Wall, students create a wall of words recollecting and analyzing the words encountered during the previous weeks. The words that were registered in the minds of the students through semantic map and flip-a-chip were recollected and consolidated on the vocabulary wall. The students were given colour pens to jot down words, synonyms, antonyms and root words refreshing their memory on plain paper fixed on the bulletin boards.

In Treasure Hunt, the students are expected to find the word from their literary reader, of which two synonyms and two antonyms were written on board. For example, students were given a chapter called “Six Fools” to read and I wanted them to hunt out the word “earnest”. For that, I provided them two synonyms – grave and intense – as well as two antonyms – unserious and trivial. These words were written on the board and 20 minutes were given to the students for finding the word from the chapter. The answer was discussed towards the end of the classroom transaction.

All that I have described above was part of an action research that I had undertaken as I was breaking into regular teaching. All research is data driven and demands evidence. So after conducting my interventions for more than two months, I had to find out the effectiveness of these strategies in enhancing vocabulary. I decided on three sources: planned discussion, my observation of the classroom using a checklist and another teacher’s observation using the same checklist. In planned discussion, students were given a topic in advance and provided with two ice cream sticks which they could use to state their point during the discussion. By doing so, the students were given the authority to participate taking away any compulsion. Observation was based on a checklist for students’ participation.

The effect size of the first source was 0.58, which, statistically speaking, is a significant impact. Sources 2 and 3 did not lend themselves to effect size calculations. However, both pointed in the positive direction, that is, vocabulary enhancement leads to increase in participation of students during classroom transaction.

To conclude, investment in vocabulary enhancement generates a good return through higher participation and engagement, and will eventually lead to better understanding. But I must also point out that vocabulary building is a slow process, and therefore must continue through the entire school years.

The author teaches at DPSG School, NCR. She can be reached at aathira.panicker@teachersity.org.