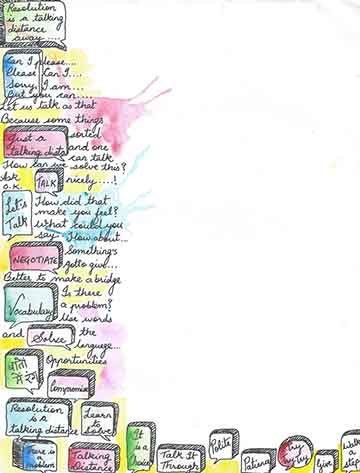 Some time ago I attended a workshop for teachers, on conflict resolution. During the programme, several typical conflict situations – such as one child trying to snatch a toy from another, or two children pushing and shoving over who should go first – were acted out, with adults playing the parts of children. Participants were then asked to deal with the situation. What was noticeable was that in every case, the teacher simply stepped in and, in a loud voice, began issuing arbitrary instructions and commands. (“You will go first.”) While this may be quick and easy, it serves the interests of the teacher more than those of the children.

When to intervene.
You don’t want children running to you to solve every little thing for them. It’s good to let them sort out their own issues – up to a point.

You may want to intervene if:

Imposing a solution doesn’t teach them how to solve conflicts. It makes them feel disempowered. Usually one person will feel wronged by your solution and will be resentful. Another consequence can be that, later, when the children have become adults, they will still look to someone else (eg. the government) to solve all their problems for them.

By this time both have said ‘OK’, they cannot help agreeing. They have both now become part of the solution.

Children will copy your example. How do you resolve conflict, whether in the classroom or outside? Do you shout? Do you demand? Do you continue to insist that your way is right without listening to the other’s point of view? Or do you pay attention to what the other is saying, negotiate, compromise, give in gracefully to their request?

Solving interpersonal conflict is important not just because it makes your classroom or playground more peaceful. On every level – from friends, to the married couple, to the family, to the community, to the nation, to the world – the ability to resolve conflict peacefully and amicably is crucial to harmony. What greater gift can we give our children than to teach them how to do it?

The disruptive child
All knotted up inside
Barriers within build barriers without
Identify, listen and empathise
Responding to conflict