I think that teachers are some of the most creative people on earth, despite the back-breaking workload that they have to negotiate each day. They think on their feet when an unexpected question comes up in class, change tracks when a lesson plan does not work, and show the courage to be led by students in pursuit of new opportunities to learn. Being responsive to their immediate context is a skill that they cultivate over time, and one of the best ways to hone it is by learning from the experiences of other teachers.

These reflections began to take shape in my mind while I was reading Sandeep Rai’s book Grey Sunshine. Published by Aleph Book Company in 2019, it stitches together real-life stories from the Teach For India (TFI) fellowship that trains and places young professionals in government schools across India. Given Rai’s decade-long association with TFI in a variety of leadership positions, and the access that comes from it, the book is filled with stories of well-networked teachers who created magic in under-resourced classrooms. I want to highlight one of those in the hope that it will inspire other teachers to trust their imagination, take risks, and figure out how to leverage their connections in order to serve their students better. However, this piece is not to be read as an endorsement of how TFI functions as an organization. That would be a separate discussion, and is outside the scope of this article.

Nalika Breganza had arranged for her class of fourth-graders, and a number of older students, to see a casting audition of Mahesh Dattani’s play Final Solutions at Sophia College in Mumbai. 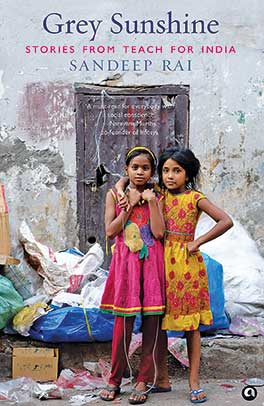 The college chose this script for their annual theatre production as they wanted to address the communal divide between Hindus and Muslims, and initiate a dialogue about religious bigotry in India. After watching many adults walk on to the stage and audition, one of Breganza’s fifth graders, asked, “Didi, can I try?” Breganza could have dismissed the idea, or reprimanded the student. She did not. As luck would have it, many of her students were invited to go up on stage and audition to be part of the angry mob in the play.

Rai writes, “As the audience looked on intently, they could feel the tension in the room. It was as if the kids were no longer acting. Nalika, her mouth agape as she watched intently from the front row, didn’t know how to respond. She was as shocked as the rest of them. That’s when inspiration struck.” One thing led to another, and eventually Breganza’s students got an opportunity to take over the entire play. Her resistance could have thrown a spanner in the works but she simply embraced whatever came her way. It was clear that, unlike the college students, Breganza’s students could enrich the play with their own life experiences. They came from Zakaria Bunder and Jijamata Nagar – Muslim and Hindu neighbourhoods located in opposite directions from the school.

Over the next six months, Breganza set up a rigorous schedule to prepare these students. She wanted them to be appreciated for their talent and hard work, and not because they were poor. Regardless of the lesson she was teaching, she kept making an effort to connect it to some aspect of the play. “The children began exploring communal tensions and debating religious issues in class. They learnt to name new emotions and practiced the subtle nuances between expressions of frustration and anger. They read passages on post-partition history. They worked collectively on set designs. The classroom was effectively a full-time production house,” says Rai. All that Breganza had learnt in her own college years, as president of the Sophia College Drama Club, was put to good use.

As the students brought their energies together and dedicated themselves to the production, a lot of things that were suppressed and unsaid came up to the surface. Breganza had asked the Hindu students to play Muslim characters, and Muslim students to play Hindu characters. This was not an easy process. There was discomfort and restlessness. The students’ beliefs about their own communities and other communities were challenged. Gradually, the outrage transformed into understanding and empathy. Through the process of learning about each other, the students became a close-knit collective. After numerous rehearsals, they performed for an audience of 500 people, and got a standing ovation.

I do not want to belabour the point but I think it is important to acknowledge what the teacher did. Breganza’s students were able to benefit from a unique learning opportunity because she used the chance to walk the unscripted path. Had she shut down the first student who came up with the idea to audition, none of what followed would have happened. Though her initial response was one of embarrassment, she did not restrict the students from dreaming. She became a cheerleader for her students and went all out to make things happen.

You might think that you are not creative. You might have students who are not as driven as hers. You might have colleagues who think you are an attention seeker. You might have a school leader with rigid ideas about how curricular goals and learning objectives need to be met. You might have personal commitments that do not allow you to spend extra hours at work. You might run into other obstacles. Life comes at all of us with shocks and surprises. If you are willing to take a messy situation and turn it around, you will find a way. The outcome may not be a grand theatrical production but your students will love you for who you are.

The author is a fellow with the Prajnya Trust. He works at the intersection of peace education, gender equality and queer rights. He also has an M.Phil. in English Language Education. He may be contacted at chintan.prajnya@gmail.com.