A few weeks ago, a friend who works as an independent career counsellor in a school in Bangalore had an alarming story to share. She was counselling a 10th grader in a school that has dual syllabi and the student in question told her that she could not take the IGCSE exam in a specific year because her school had forgotten to register her name for the exam. She was missing an entire year due to this confusion.

In a country that has three national syllabi and two international curricula, there is bound to be confusion in the way the academic calendar is drawn up, especially when it comes to giving enough time to apply for college exams. How do schools work around this and how much flexibility do they have in terms of organizing the calendar?

According to Ms. Priya Ramakrishnan, who teaches biology and chemistry at National Public School, Bangalore, all CBSE schools are provided with mandatory programs to be followed in school, like the Adolescent Education program for example, and it is up to an individual school to balance the compulsories with the extra-curricular activities. “At NPS, we have two calendars – the Program of Work and a regular school calendar. The Program of Work is an academic calendar and outlines how topics and lessons have to be spread across a year. This varies according to the school. The school calendar has all the activities planned for the year, including test dates and events like children’s day and the annual day. It is up to the school to balance this and to work around the CBSE guidelines.”

Ms Ramakrishnan says that the 8th, 9th and 10th graders find themselves to be the busiest people in the entire school, due to many activities and academic goals that they try to achieve in the year. “A school can be smart about the calendar and balance things out. We had a student who had to travel due to a football tournament held outside Bangalore and couldn’t attend school for 25 days. All of us gave him remedial classes as soon as he came back. We also have so many Olympiads to juggle throughout the year, apart from competitive exams like the IAIS, PSAT and IGKO. In the end, this constant see-sawing teaches children how to manage time, organize themselves and other important life skills.”

Common curriculum, splintered timelines
While the CBSE and ICSE offer uniform curricula and timelines for schools that are affiliated to them, many events make this uneven. For example, many convent schools ask for a longer Christmas break. In April 2017, in Kerala, on the basis of a petition by a parent who wanted schools to have a longer Christmas vacation, all CBSE schools in Kerala ended up being directed by the CBSE regional officer to follow the academic calendar as set out by the state government for the state board schools. In fact, even the date sheets for the 2018 board exams were delayed because of the many legislative elections in various states. CBSE even releases official sports calendars and this too can be an additional framework to keep in mind when planning a school’s academic year. 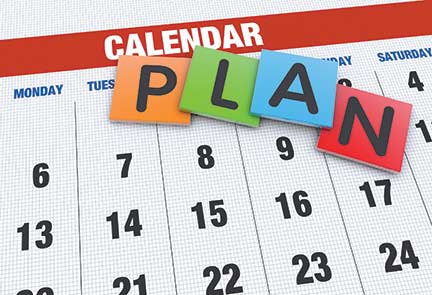 In 2017, the CISCE (Council of Indian School Certificate Examination) had to change exam dates because of the Assembly elections, postponing the date from February to March. In 2018, it may advance the exam to February instead. This constant change in dates and timelines can cause further confusion to schools.

In May 2017, Class 10 papers had to be re-evaluated using the marks moderation policy and this delayed everything, right down to the start of the next academic year, causing the academic calendars to go completely off track. In fact, with the CBSE changing so many aspects of the syllabus implementation, teachers find it hard to immediately put the changes into effect.

Schools with dual syllabi have the extra pressure of juggling two syllabi, usually a national and an international one. According to Nirav Rawal, Principal of Oakridge International School, Bangalore, the hassle is mostly an organizational one and if a school is well-organized, these confusions can be avoided. “Oakridge in Bangalore will shift its calendar for the IB students to the international calendar. To adjust the timelines, we will begin the next academic year after a short break. We will start classes in April and they will go on till May.”

Another major challenge that IB students face is that their exams are in May but they have to apply for colleges way before that date and they need to know their exam scores. In fact, IGCSE even started holding exams in March to align to the Indian academic calendar. Says Rawal, “There is a predictive score based on grade level exams conducted throughout the year. Students can use these scores to apply to colleges. There are operational challenges but proper planning can eliminate them.”

While many institutes accept IB students provisionally through their predictive scores, central universities like the Delhi University do not bend to this rule and will wait till students get their results in July, by which time the universities would have released their fifth list of students accepted for admission. This is because the first and second lists are the most competitive.

The CIE (now rebranded as Cambridge Assessment International Education or CAIE) announced exams in March for Class 11 and 12 in 2016, specifically for Indian students who want to apply to Indian colleges. In fact, to make it more convenient for students, the CIE has introduced more choice of subjects for the 11th and 12th grade (which are the AS and A level students in the Cambridge program.)

Many of the confusions within the CBSE framework appear to have more to do with the splintered and disorganized timelines than anything else. In a country as diverse as India, even implementing a common syllabus is a hard task. The presence of ICSE and State boards, and the influx of IGCSE and IB boards, has resulted in some confusion among schools and parents. It is ultimately up to the school management to plan well. It is also the responsibility of colleges and universities to adopt a more flexible and progressive approach to accepting students. The CIE’s announcement of exams in March for Indian students shows us that international boards can also adapt their timelines to the Indian calendar.

A few days ago, a parent who sends her sons to a popular CBSE school in the city asked me if it was legal for a CBSE school to reopen in the first week of May. She was under the assumption that come what may, schools cannot be allowed to operate in the months of April and May. However, many other parents who responded to her query said that this was completely normal. One parent who sent her child to a Kendriya Vidyalaya school said that every vacation, the school would be open for a week or two in May and then vacations would resume. A 9th grader studying in a CBSE school in Chennai had a bridge course in May during the summer.

A few parents from Delhi said that many of their CBSE schools close after annual exams, reopen for the next academic year in April and have classes till mid-May.

An international syllabus like IB for instance sees children go to school when other children have vacations, in April and May, and start holidays when CBSE and ICSE children are back to school. This causes immense dissatisfaction among the students, who feel out of place in this system. So much so, a school like Mallya Aditi in Bangalore changed its timeline to suit the Indian calendar, even though it does not follow an Indian syllabus.

Multiple syllabi and timelines can cause confusion, especially when it comes to CBSE schools, given that there is such a huge number of schools following this curriculum across the country, in places with differing climates. With so many syllabi in India, conflicts may arise but it is important for schools to be both systematic and flexible for the sake of the children.

The author is a journalist and writer. She runs a community of parents, teachers, principals and educators named “Bangalore Schools”. She can be reached at shwe.sharan@gmail.com.

The pragmatics of planning
An event or a process?
Reframing the academic narrative