Some weeks ago I received a call from a mother of a child who attends the same school in Bangalore where a six year-old was raped by the skating instructor. She wanted to know if I, as an educator, could advise her on whether to send her daughter back to school when it reopened the following day. “I’ve had a hard time explaining to her why school is closed,” she said, “She’s in the first standard and all she wants is to go back to school and see her friends. Should I send her back or find another school?”

Feeling frustrated and helpless, all I could say in response was that I could not make that decision for her, that I understood what a hard decision it was and that I hoped that things turn out well for her child. Neither my previous experience as a school teacher, nor my current role, teaching postgraduate students of education, was of any use to a mother who just wanted her child to be safe, in the one place where we hope that all children are safe, school. 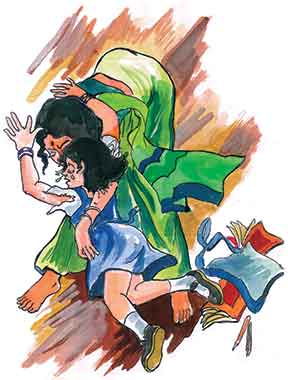 That someone who was not the proverbial stranger, but had a legitimate reason to be in the school, a teacher (even a teacher of an extra-curricular activity like skating) and therefore, in loco parentis to the child, could rape her, is as revolting as it is terrifying. Yet someone did. What’s more, as Rajyasri Rao, a writer on educational issues and herself a young mother argues, he did it in a school catering to upper middle class families who have the time and means to evaluate educational choices (mavillarajya.wordpress.com). One shudders to think of the plight of children from lower income groups. What might their parents’ response be to such a crime? How many acts of sexual assault are behind the dropout statistics of children, especially of girl children in our country? Since the Bangalore case came to light, similar cases of child abuse have been reported in the media, suggesting that child sexual assault in schools is more widespread than we might have imagined.

The response of parents and the police has been to pressurize school managements to tighten security in schools. Some of the security guidelines for schools that were issued by the police seem like common sense (identity cards for parents, background checks for all staff). Others like the move to install CCTV cameras in classrooms and buses suggest that schools are increasingly going to turn into highly monitored spaces where learning, spontaneity and fun are overshadowed by a sense of threat and anxiety. The police guidelines make no mention of how teachers and educators might create a caring, sensitive culture and a gender-positive environment within and outside schools. There needs to be a more meaningful public discussion on questions such as ‘what is age appropriate sex education?’ or ‘how do we teach young children to distinguish good touch from bad?’

Yes, the world can be a treacherous place and we all would like to keep our children safe from its dangers but it is the only world we have. And we are also responsible for creating the social and cultural conditions in which our children grow up. So, for instance, a school catering to upper middle class children which attempts to keep them away from bus drivers (as the guidelines indicate) might unconsciously suggest to its students that people less privileged than themselves are in some way threatening, thus reinforcing class divisions in an already hierarchical society. We need to remember that many incidents of child sexual assault happen within families and neighbourhoods; perpetrators often share the same social background as the child. Therefore children need to be taught that the predator is not always a stranger. They need to be encouraged to voice their discomfort with and resistance to inappropriate adult behaviours. We cannot teach a child that the world is sometimes unsafe, without also teaching her/him to assess risk and navigate possible dangers.

We need to start talking openly and age appropriately with children about sexual assault. We need to train teachers to be sensitive in relating to children, to respect children’s personal space and to recognize signs of abuse. Finally, we need to check the glorification of male aggression in the mass media and encourage a gentler, kinder, respectful masculinity through education. Will these measures keep all our children safe, all the time? I don’t know for sure, any more than I know the answer to the dilemma of the young mother who telephoned me. But I do know that increased vigilance without a change in culture is not the answer.

The author is Associate Professor of sociology and gender studies at Azim Premji University. As a school teacher, she taught social studies and language arts at the primary level and sociology at the secondary level, followed by a stint teaching Women’s Studies at the University of York, UK. She is currently engaged in a research project on gender and professional identity amongst school teachers. She can be reached at jyothsna.belliappa@apu.edu.in.