My dream of experiencing the Savannas came true when I landed in Kampala, Uganda, and moved to a small town called Arua in the northwest of the country, also known as the west Nile region. I came here as a volunteer teacher educator in 2012 as part of a UNICEF project.

I remember reading that Winston Churchill had called Uganda the ‘Pearl of Africa‘.

To know what that means one has to spend some time in the place. Africa, to many adults, still means pyramids, lions, the South African cricket team, and the Nile. Its numerous groups of people and their culture are little understood. Africa is still the dark continent for many and the stereotypical understanding of this part of the world gets passed on, compounded by the fact that very little of this part of the world is discussed in Indian schools. I say this because what unfolded before me in this part of the world was truly a humbling experience. In a lighter vein, many parts in this region are totally dark after sunset either because people simply cannot afford an electric connection or the power lines are still not drawn!1 All this along the great Nile! Also true is that this beautiful landscape (earmarked as national parks) is out of bounds for the locals as they find it too expensive to pay the entrance fee. But more to the point for this audience, I was witness to happenings in this country which are leading to problems similar to those that we are struggling with in India.

The place where I stayed, Aura, is inhabited by an ethnic group called Lugbara who speak a language called Lugbarati. It had no script of its own until their Colonisers, the British, gave it a Latin script in 1918. Even today, much of the traditional knowledge is transmitted orally. Their living practices are guided by tradition which is governed by the clan. Polygamy is prevalent. The birth of a girl child is celebrated as it brings money to a family. Bride money is still given in the form of cows, goats, hen and land! In Ugandan and so also in Lugbara society, when a woman marries, she brings a herd of cattle to her in-laws’ house as the bride price. Women are expected to continue the clan by bearing as many children as possible.

I travelled in an area of nearly 100km radius to get an understanding of the school system. It is a pretty sight to see children in their coloured uniforms (each government school had its own) running to school even in the remotest area. The schools started by the missionaries exist even today. The new schools, except the purely private, are generally run by religious groups. Before the Ugandan government declared UPE (i.e., universal primary education) as part of Millenium Development Goals, schools were attended only by pupils whose parents could afford to pay. The class strength was manageable and the medium of instruction was English. The introduction of UPE in 1997 brought thousands of children to schools with no adequate preparation to receive them. The ratio between teachers and pupils, textbooks, benches, classrooms available for children, is very alarming. I saw many children without a pencil or a writing book. The strength in classes 1 to 3 could be as high as 200! For the first time I saw children sharing textbooks, sometimes, one book per 5 children! Textbooks are kept in the school and re-used the following year. In many cases children learn orally, with only the teacher having the textbook. Schools that are unable to cope with the numbers have become places where children are labelled dull, lazy, and made to leave as ‘drop outs’. The dropout rate from class 1 to 2 is 34 per cent and between class 1 and 7 it is a whopping 82 per cent2. Class 7 exams are very crucial, as they decide the students entry into high school and also the performing level of the school. 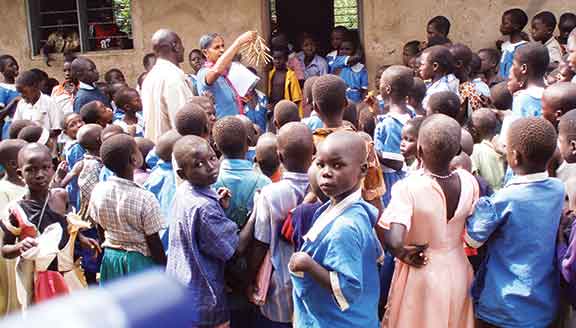 Many readers may wonder how a class of over 100 children functions. But I was in for a surprise. The obedience in the class is to be seen to be believed. The classroom is a place where the teacher is an authority to be respected and obeyed. The colonial practice of courtesy still continues, and it was embarrassing when children knelt down to greet me! When the noise level gets beyond a point, the teacher shouts a word, the children respond and all is quiet! Corporal punishment still exists, though a lot is being done to disengage teachers from it. Teaching is only through chalk and talk. And it is mostly loud chanting.

Religious studies are a serious subject in the schools. Islam and Christianity are taught. School campuses have huge boards that speak about the culture and also the modern norms that come with education goals. ‘Say no to Sex’ , ‘Fear God’, ‘Material love is buying your own coffin’, ‘Premarital sex is risky’, etc.

Another peculiar occurrence is in relation to the medium of instruction followed. In 1992, the Ugandan government introduced thematic curriculum in classes 1, 2 and 3 in the local language. This must have been to change the school curriculum and link it with the child’s home. This was seen as a regressive step as people were used to English as the medium of instruction. There are heaps of well illustrated books in Lugbarati distributed to schools by the government, which are not made use of. Interestingly, the curriculum content is more from books than local stories. Oral knowledge now is research material collected and stored by linguists from other lands. I heard from a fellow Ugandan volunteer that in his school where English was the medium, the teachers punished the children if they spoke in their mother tongue. Teachers whom I spoke to see no meaning in learning to read and write Lugbara, Of what use is the language in writing they ask, if the children will have to switch over to English from grade 4.

There is however a silver lining. I was amazed at the quantity of land, sometimes more than 10 acres that each school has. And most schools have huge playgrounds. Farming is an integral part of the school activity. Most schools have quarters for teachers, though not adequate. And it is common to see people after their school/office, working on the land. During school hours children take part in farming activities to grow beans, cassava, maize, or bananas. There is a plan to synthesise the merits of farming and reading. But like elsewhere, privatization of schooling has begun to raise its ugly head even in Arua.

Just as in India and Nepal, teachers in the government system are poorly paid. They have very little autonomy and their self-esteem is low. As elsewhere, even though the library is full of posters and books, they are seldom used. There are activity cards given by many donor agencies which bear the same fate. What can anybody do when the class strength is raised from 50 to 200 at one go? Teachers are no magicians. And the idea of bringing in mentors from the more developed countries to such a scenario seems a farce! That I returned even without completing six months of my mentorship is a case in point. In the short time I stayed there I empathized with my fellow teachers and joined them in their endeavour in the simplest possible way I could.

If I had stuck to my role, I do not think I would have been so enriched from my stay in Arua, Uganda. My experiences have been so varied and exciting that there is lot to share. I have thrown some light on the community I worked in and the state of schools. I have written very little about my interventions as my purpose was to share more about the community and the change it brought in me.

The author is a part-time mentor with TVS school, Tumkur and is very passionate about learning. She can be reached at [email protected].