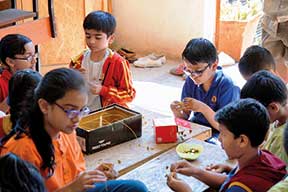 It was good that I got to meet Shobha George through a friend. Shobha’s son Danny studies in Aman Setu and she stays very near to, and is friends with, Madhavi Kapur, Aman Setu’s founder. This made it easy for us to meet Madhavi, who her friends call Adi, before she rushed away for her first meeting of a hectic day. Shobha also drove me to the difficult-to-locate-on-my-own school on the outskirts of Pune and introduced me to people there and then drove me back. This story is about Madhavi Kapur and Aman Setu but it wouldn’t have happened without the help of one happy and satisfied Aman Setu parent – Thank you Shobha!

When Madhavi Kapur finished apologizing for the exuberance of her two dogs, saying that hers was a dog-loving house, and when the dogs had finished introducing themselves and lay down at our feet, we got talking about her school. Madhavi (her mother Rita Shahani was a famous Sindhi author) is a large, warm, wise woman; articulate but with the unusual capacity of attentive silent listening; I felt that both teachers and children would be drawn into her circle of warmth without being intimidated. She has been in the educational ‘industry’ for over 30 years and was the principal of the Rewachand Bhojwani Academy for 11 years before starting the Madhavi Kapur Foundation and Aman Setu in 2008. She walked out because she saw that her ideas about good education were difficult to implement in a setting with multiple stakeholders pulling in different directions. So one of the rules she set for herself in her new venture was to not take money from industrialists or politicians who would bring their own agendas to the teaching-learning paradigm. When I asked her about the school philosophy, she said that they question everything and have cobbled together a philosophy of their own. Madhavi believes in this space for questioning. The faculty meets every week and discusses things that affect the school. This could be interpersonal issues, classroom management issues, or just about anything. She said that bringing it out and discussing it is how they work the stresses out of the system. She feels that the school’s problems are very dynamic in nature and constantly being at it is the only possible solution. 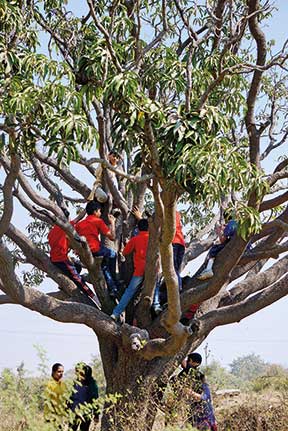 Under the Foundation, what Madhavi has set up is a unique learning ecosystem which includes the following:
Aman Setu: The school that we can think of as an experimental laboratory.
Keystone: The teacher training cell that offers over 20 training modules to the many government and private schools they work with.
Ratnanjali: A comprehensive, interconnected, holistic curriculum developed over two decades by Madhavi and her team, with a curriculum document for each subject, teacher manual, student workbooks etc., implemented and being tested in Aman Setu. 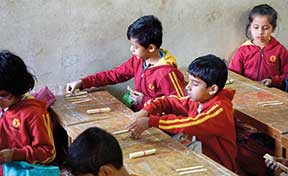 Shobha showed me around the two school campuses located near each other. Mud and bamboo buildings; the shell of an old bus as a classroom; discarded tyres used as play accessories; furniture made out of old crates; their own cow, dog, hens, and rabbits; the mix of affluent, poor, and special needs children that study at Aman Setu all make for a rich natural and manmade learning environment. I spent some time with Sonali Sathaye, the head of Ratnanjali and saw the deeply thought out and brilliantly executed work that they have done with their curriculum.

It is appropriate to finish talking about this unique school with a quote from their website. 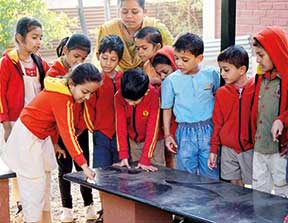 ‘Our curriculum is organized in interlinking themes which stress the underlying values of love, peace, respect, courage, hard work, responsibility, and balance. The core principle is the belief that we are all interrelated and interdependent and part of one universal reality.’

Been around for: 10 years
Number of teachers/staff: 30
Number of children: 130 students
Classes handled: 1 to 7
USP: Aman Setu is part of the Madhavi Kapur Foundation. In addition to the school, the foundation has a teacher training wing and a division that works on curriculum development. These components along with the school that is akin to an experimental laboratory provides a strong educational ecosystem.
Location: Lohegaon, Pune
Website: http://www.amansetumyschool.com

(Note: I visited Aman Setu and met Madhavi Kapur in early 2014. She was a cancer survivor then. She suffered a relapse and passed away in June 2016.)