Before we address secularism and the developing of respect for all religions or creating an environment for the free expression and exchange of religious belief within a classroom, we need to first ask ourselves some questions. Does religion have a place in the classroom? Does it need to be discussed or addressed? Can we ignore it and leave it to the homes? Cannot a school be a-religious?

Stepping back from the ‘either-or’ nature of these questions, one can find an answer which neither avoids them nor gets trapped by them. And that is: Religion can be about practices and it can also be about an environment.

It is vital for us to think about how to develop a ‘religious environment’ which is completely different from a ‘religious identity’ within the classroom. The reader may feel that I am visualizing a Hindu, Christian, Muslim, Sikh, or Parsi classroom. I am not. I have in mind not this or that religion but the permeation of a classroom’s atmosphere by the religious temperament. Whatever be the standpoint from which religion is discussed, the environment is religious. 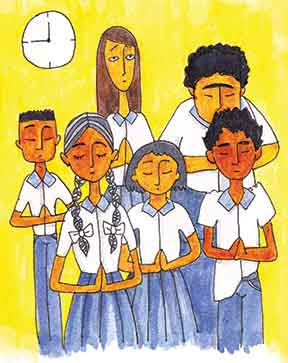 I say this with great sensitivity. Religion is not a bad word; nor is it the most important idea born from the human intellect. It is not about belief in certain books or deities. Religion and god as ideas are part of Man’s search for existential answers. Life within and around has always fascinated us and we search for reasons. At different ages and stages of life, we wonder and ask: How? Who? When? And most importantly: Why? Finding answers to these questions is important enough, but the act of questioning is infinitely more important. Every religion asks sincere questions. The questions are beautiful, because woven into them is every human act in life which reveals to us, ourselves. Can we deny a learner the experience of formulating and posing these questions? We cannot; that would be running counter to the nature of the human mind. We may disagree with the answers but cannot deny the child the right to ask these questions. Therefore, the rejection of questioning in a classroom will be tantamount to rejecting the right of every child to essential questions. Every child has to tackle questions about religion and the classroom is the ideal space for this.

I have come to the conclusion that religion has a critical place in school. But along with this come some serious challenges. Which religion? Most schools begin their day with Hindu hymns, Islamic prayers or Christian chants and the like. These are rendered in schools that have associated religious predispositions. Some schools try and ‘balance’ the act by spreading the ‘service’ long and wide to cover a spectrum of religions, though their preference is clear. The number of schools which philosophically believe that religious prayers must include all religions is small. The problem of religion may be said to begin right there, in the morning assembly; in other words, at the very beginning. Schools display a clear religious bent of mind even if their students come from diverse backgrounds. It should not matter if the percentage of these ‘other’ students is small, say, 1% or ‘in any case, a minority’, like, 30%; every child is relevant for every child has a mind that is questioning life. After a religion-specific or dogma-dominated prayer students go into the classroom and discuss the Indian Constitution, and what does it say?

We the people of India, having solemnly resolved to constitute India into a sovereign, socialist, secular, democratic republic and to secure to all its citizens: justice: social, economic and political; liberty: of thought, expression, belief, faith and worship; equality: of status and of opportunity; and to promote among them all; fraternity: assuring the dignity of the individual and integrity of the nation]; in our constituent assembly this twenty-sixth day of November, 1949, do hereby adopt, enact and give to ourselves this constitution.

After reading this Preamble to the Constitution, do we or do we not see the philosophical problem in our act? A Muslim girl in a Hindu school singing songs on Rama and Krishna, or a Hindu girl rendering hymns on Jesus, walks into the classroom. While the ‘liberty of faith, belief and worship’ of the institution was protected, what about that of this young girl? I have used the phrases ‘Muslim girl’ and ‘Hindu girl’. Let us also not forget that these girls are individuals first, girls and boys first, with philosophical quests. They may move on to believe in one or even in ‘none’. Most children may feel comfortable with these prayers but could the girl have said that she will not participate in the prayers, as the songs did not accord with her religious beliefs? This question does not arise in our minds and even if it does it gets a ‘formula’ answer: ‘We believe in this religion and have the right to celebrate it. You may accept it or leave’.

Is not everyone or every institution allowed to practice their religion? Yes, of course. And so a school, even if ‘private,’ is a public body and is responsible to every child that enters its precincts. A school is a social organization, by which I mean, that which contributes directly to social development. It has to look beyond any individual founder or principal. Isn’t it ironic that we are discussing secularism in the classroom when we do not have it in the way we have built our educational institutions? Among the private schools in India (teachers and students of which will be the majority of the readers of this piece) how many are Christian, Hindu, Muslim institutions, either officially or unofficially? If we want a secular classroom then let everyone of these institutions first discuss secularism in their structure before we advise children on the beauty of every religion. 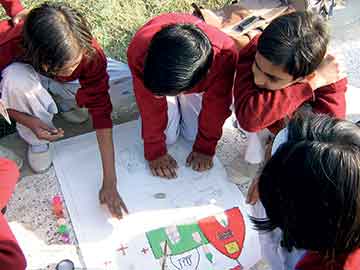 What about the word secularism itself? If the word ‘religion’ has had both a narrow meaning and one that can transcend all that, so also the word ‘secularism’ is inadequate and problematic. It did not originally indicate an understanding or respect for all religions. The older definition, in fact, meant, disregard or rejection of religious beliefs. Today it means that state policy on governance, morals, education, etc., will not be dependent on religion and that everybody is free to practice their religion. But is this quite enough? I do not believe it is. The word ‘secularism’ lacks the social fibre to address the beauty of religion and it therefore needs to be re-invented. We need a society that can understand the beauty of religious thought, irrespective of its source and a State that gives protection and strength to that understanding. We need therefore something more than a secular nation, we need a truly multi-religious nation. This nation would include atheists as well because the discarding of religious belief involves the act of understanding religion. I am not establishing the necessity of religion but the necessity for religious thought and questioning, this the word ‘secularism’ does not provide. Capturing the spirit of the constitution beyond the limitations of the word ‘secularism’ is the philosophical responsibility of every school, every teacher.

What can we actually do in a classroom? This is probably the easiest part of the problem while the other two I have referred to will be much harder to address. The classroom is not a place to establish or challenge religious beliefs. The classroom must be used to make every child aware of what every religion is and how it has played a role in humanity, emotionally and intellectually. Religion has not developed independently from other fields of life and that may be a starting point to bringing religion into the discussion of society. Every child is going to come into the class with religious pre-dispositions. These may be from family, friends or the key influencer, the media. Is it the job of the teacher to remove these blinders? Of course it is. The teacher cannot run away from this social duty. Every child must be made to see the beauty in the practice of every religion. We will find that trying to make someone understand another religion is not as easy as actually making them sensitive to the beauty that lies in religion. Beauty exists in art, music, dance, literature and these are our windows to religion. We have to use these to create an aesthetic connection.

Refinement comes not from understanding but from sensitivity and this is an emotional derivative. It cannot be taught by comprehension and hence the way to build cross-religious connections would be through experience of religious belief, mythology, practice and art. We have to build these bridges through emotions. But emotions have been left behind in teaching. Even poetry is taught as a piece of language. Emotion has to re-enter the classroom. We are human because we feel and if we can feel the beauty in other religions we can look beyond our conditioning. By emotions here I am not talking about its volatility which is in fact born out of the lack of feeling. Emotion here refers to the capacity of every human being to connect with life directly. This has to hold the bond between the student and the teacher and the student and the studied. Emotion is also the way to bring together the diversity of religion. When discussions on religious thought are born out of the emotional sensitivity to each other, the appreciation of diversity would be natural, even if it is disagreed upon. We need to create that strength. With this strength we can create a society that is aware and that sees religion beyond its violent manifestations. It is the violence in thought and action that has created this problem for us. If we can address it from the recognition of beauty in all religions then every student will be able to sieve through fanatics and respect every religion as being part of our existence. And they are most welcome to accept or reject it.

The author is a Carnatic classical musician. He can be reached at [email protected].

Is there a place for religion?
Can tolerance be taught?
Secular ethics: concern for our fellow beings