Career/education, family, friends, and leisure are typically the four important spaces in a young person’s life. Pravah, with support from ComMutiny – The Youth Collective and Oxfam-India, has developed the concept of ‘the 5th space’, which enriches relationships in the other four spaces by nourishing the capacities of young people to understand and define their connection to the world and to take effective and responsible action. The 5th space believes that self-transformation is the first step towards creating change in our relationships and in society. Over the last four issues of Teacher Plus, we have been featuring stories of people and organizations making a difference in education by engaging with youth through processes at the heart of the 5th Space formulation. Here is the last one in the series.

I was in the second grade when the city of Mumbai was being torn apart by communal riots in 1992. I am not able to recall the violence of those days because children are usually shielded from the knowledge of such things. In May 2013, while reading Suketu Mehta’s gripping book ‘Maximum City’, I was compelled to confront some bitter facts about the city I grew up in, especially one that likes to think of itself as cosmopolitan. It was shocking to learn that among the most affected were the people of Jogeshwari, a suburb that is just a ten-minute train ride away from where I live. 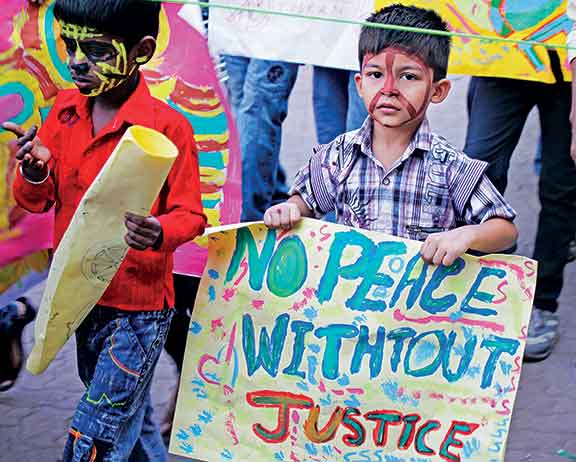 A couple of months later, I got to know of SAHER, an organization in Jogeshwari doing some wonderful interfaith work with young people, and strengthening local capacity and resources for peace building. SAHER is an acronym for Society for Awareness, Harmony and Equal Rights, and it runs out of a small office in Prem Nagar, a locality in Jogeshwari. They bring together children and youth from different religious communities to participate in programmes that involve sports, teambuilding, leadership initiatives, communication skills, career guidance, social awareness, and much else. According to them, the energy of young people is too precious a resource to be wasted or inappropriately channelized. This realization is what fuels any 5th Space project.

“The place where you got off the autorickshaw, that police chowki, is located at the dividing line between Hindu neighbourhoods on one side, and Muslim neighbourhoods on the other. Where you are sitting right now is a Muslim ghetto. Many people refer to this place as ‘mini Pakistan’ in a derogatory way. And the dividing line is called the LoC, or Line of Control,” shared Manasi More, Co-Director of SAHER, as I tried to imagine what this place might have looked like in 1992.

Sitting there, I wondered how the people living in that locality negotiated the misperceptions, accusations, and prejudices surrounding them on a daily basis. Living in India, it is not uncommon to hear about Muslims being questioned about their loyalties to the nation, or unfairly told that their place is in Pakistan, not India. It is unfortunate that the legacy of the Partition in 1947 continues to haunt the everyday existence of minorities in both countries. It is against this backdrop that SAHER’s work with young people needs to be understood.

“In 1992, the police were picking up a lot of young people and putting them in prison, often without verifying. False charges were pressed on Akhtar. He was in Mumbai’s Arthur Road Jail for 21 days. What was his crime? The fact that he was born in a Muslim family! It did not matter to them that Akhtar’s father brought him up in a home that celebrated all festivals, and that Akhtar’s circle of friends was not limited to people of his faith. The fault lines in our society run much deeper than we are aware of,” added Rama Shyam, SAHER’s Co-Founder, who is also married to Shaikh Masood Akhtar, the other Co-Founder.

When Akhtar was released from custody, he came home to a Jogeshwari that had got sharply divided along communal lines. The bitterness disturbed him. He wanted to do something that would change things. Aware of the popularity of cricket in India, he thought it could serve as a binding factor for young people across barriers of religion, caste, and community. He began to share this idea with others, and in 1997, they started a cricket club and a theatre group that spread the message of peace and a respect for diversity. There was no organization, only a committed network of volunteers operating under the banner of Naujawan Ekta Committee.

Rama, who grew up in Durgapur and studied in Delhi, got associated with them only in 2002 when she came in as an intern from the Tata Institute of Social Sciences to do her field work. “The seed of building an organization was sown in 2005, and strengthened in 2006 with the help of Changelooms, a programme that promotes youth-led social change initiatives. We realized very few organizations were working on peace building, and we really wanted to work with young people. They have so much to offer. Usually they are seen as irresponsible and it is unfortunate that people carry that perception. From my experience, young people are excited to take up projects; they are curious to learn about other communities. We have organized interfaith iftaar celebrations during Ramzan and taken Muslim youth to Ganesh mandals. It was a great learning opportunity for everyone,” she said.

Anyone who is engaged in peacebuilding work knows well that peace does not mean merely the absence of direct, visible, or violent conflict. Violence is entrenched in many of our social structures and cultural practices in such insidious ways that we almost forget that it is unacceptable. Peace building involves changing attitudes, beliefs, and behaviours, and moving towards nonviolent and creative responses to conflict.

“In vulnerable communities, the idea of fun is often associated with having power over others. That can be very unhealthy and harmful. SAHER activities promote the idea that people can come together to have fun but that occasion can also be turned into something that has meaning. You can have fun while scripting a play, etching out characters, putting up a performance for the community. Fun need not be at someone else’s expense,” said Rama. In order to take this idea further, SAHER runs a life skills programme called ‘Parwaaz’ for college youth, and a football programme called ‘Sports for Peace’ for school children.

In keeping with 5th Space principles, these programmes focus on building self-esteem and gradually empowering these students to initiate their own social action projects. All the programmes are open to participants from all faiths. Through these programmes, young people who would otherwise not get a chance to interact with each other, find a forum to step out of their ghettos and get to know what lies on the other side. In fact, the SAHER team makes a conscious effort to create a diverse group, especially by encouraging girls to join in large numbers.

“We make an effort to create a relaxed atmosphere so that when these young people meet, they can freely talk about themselves, their interests and hopes for the future. It is important for them to find their own voice so that they can grow into confident citizens who do not feel alienated because of their socio-economic situation. Their deprivation and vulnerability can be easily exploited by politicians. We do not want this to happen. Our ‘Neenv’ programme allows them to pick up new skills, and improve their employability. It focuses on building a strong, secure foundation so that they can look after themselves well,” said Manasi.

The SAHER team views the young people they work with as partners or collaborators, not merely consumers of an experience made available by experts. The office itself functions more like a community centre, with people free to walk in and out, seek resources, volunteer their services, or stop by for a conversation. In fact, one of their programmes is called Mohalla Hamaara, meaning ‘Our Neighbourhood’. Taking ownership of the space and coming up with fresh ideas for community activities is explicitly encouraged. This home-like feel seems like an extension of the people who founded this space. Rama and Akhtar come across as people without pretensions, happy doing their work quietly.

Interfaith harmony is not just a cause that they have jumped on to. It is a significant dimension of their own lives. Rama was born in a Hindu family. She grew up learning Urdu from a tutor who came home and singing shabad (hymns) in a gurudwara but had a difficult time convincing her parents to respect her decision to marry Akhtar. Her doctoral dissertation dealt with the topic of syncretism. Their two year-old son is named Kabir, after the 15th century mystic poet of North India, who during his lifetime is said to have denounced all kinds of sectarian religiosity but after his death was claimed by both Hindus and Muslims. His, like SAHER’s, is a voice of reason amidst the insanity of communal strife, an ardent appeal for love in a world consumed by hate. Their work is difficult, and they often have to wait for people who get introduced to their work to understand what they are doing and why. However, what matters is that they have at least made a beginning, unlike some of us who only sit and dream visions of gloom.

The author is an independent writer, educator and researcher who is deeply interested in the intersections between arts, education and peace building. He wrote this as part of a Media Projects Fellowship awarded by ComMutiny in collaboration with the Youth and Civil Society Initiative of Sir Ratan Tata Trust and DKA-Austria. He can be reached at chintan.backups@gmail.com. To know more about the 5th Space, visit
www.facebook.com/5thSpace.