Dull grey and too profuse to be exotic, what can a pigeon teach you? A recent experience challenged my assumptions about teachers and modes of learning. 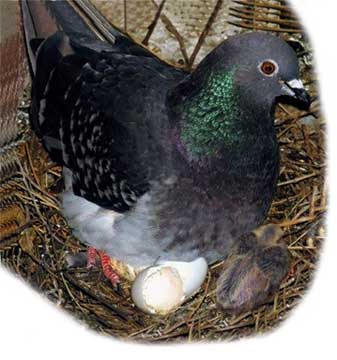 On hindsight, I feel, it all started when my husband shared the sorrow of a pigeon that had just lost an egg. High on the edge of a temple pillar sat the mourning pigeon. A piece of the broken egg was on the floor. My husband had stopped to speak to the visibly shattered parent.

Less than a week later, we noticed some unnatural activity in our erstwhile ordinary balcony. The turmeric rhizome was growing, undisturbed, on one end of the narrow, rectangular planter, but what was this beside the plant? A pigeon sitting on the mud, encircled by dry grass! We spied an egg too! The pigeon was unperturbed by our curiosity. None of us had seen an egg in a ‘nest’ from such close quarters.

Let me make it very clear that we are not one of those National Geographic families – raising iguanas or even cats. We are the most un-pet-prone family you could find. My husband empathises with the Earth’s creatures and my daughter desperately wants pets, but my son and I steer clear of anything that creeps, crawls, barks, or mews.

So, this surprise Pigeon Plan left my family of four polarized. My husband and daughter felt chosen. My son and I felt targeted. “Out of 600 flats, the pigeon couple chose our balcony!” my daughter’s eyes shone with pride. “Out of 600 flats, why our balcony?!” my son asked. I felt anxious about “the mess, the smell, and what the flat-owner will say.”

“My Space!” – tolled a wildly clanging alarm bell in my head. “I wish it had been a parrot!” – I’d barely said it when I saw the raw and evil desire to associate with ‘beauty’ and something less “ordinary”. I was terrified of what I had discovered in myself.

My husband suggested consideration and compassion. “Let’s avoid going into the balcony”, he said. My mind projected visions of a whole balcony of pigeons incubating eggs and their young in various stages of evolution. I protested. “Let’s not cut ourselves off from the balcony or we may never get it back!” I said.

Untouched by our confabulations, Naddy (a helpful, young neighbour named her) laid another egg. Her partner, we presume, brought an occasional blade of grass or a twig, offered it, dubiously looked around and flew away.

Between chores and work, we took to stepping out to “check on” the pigeon. She refused food and water and incubated her eggs for three weeks. Kunjumani and Kunjusri were born one Saturday afternoon, within hours of each other. My daughter named them with much delight. My maid cleaned the balcony carefully everyday and muttered to me about “not allowing these things to happen again.”

We all watched with unabashed fascination as Kunjumani and Kunjusri transformed into smart, grey pigeons from blobs of yellow-grey. Pigeon parents are not fussy or overprotective, we learnt. Naddy would leave her one-week-olds alone and fly off for the day, always returning in the evening. K and K grew in size and strength. Within a month, they looked full grown. They strutted about the balcony – owning the space. They took tentative leaps from the edge of a planter to the balcony floor and back.

Every morning, we ran to the balcony, hoping K and K were still there, but knowing they would have to fly the nest one day. One morning, they were gone. I could hear them on the balcony above – flapping their wings and trying to take off. Our balcony was an ordinary shell again.

Naddy occasionally visits. K and K – confident, far-flyers – drop by too. They remind us that almost anyone or anything can be a ‘good teacher.’

The author is a Bangalore based writer with a background in journalism, teaching, social development work and theatre. She can be reached at charumathisupraja@gmail.com.