My biggest grouse with most education conferences in India is the relative or complete absence of children from these spaces. Adults with a string of degrees to their name or years of teaching experience under their belt get together and discuss the finer points of curriculum, pedagogy, assessment and school administration without inviting any insights from children, knowing that they would be unemployed if the children weren’t there. The saving grace is that the conversation, in the last few years, has begun to focus more on how to create an enabling and encouraging ‘school culture’ for children instead of being occupied with the narrow aim of how to make a particular subject fun to capture student interest and improve their grades. 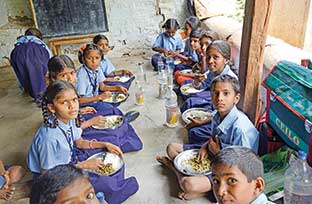 What is ‘school culture?’ It can be helpful to define it before we set out to examine how school cultures in different contexts affect the self-esteem, academic performance or physical well-being of the students being served. A comprehensive definition appears in the Glossary of Education Reform (edglossary.org), “an online resource that describes widely used school-improvement terms, concepts, and strategies for journalists, parents, and community members.” It is a service offered by the Great Schools Partnership, a non-profit school support organization based in Portland, Maine, in the United States of America, as part of a collaboration with the Education Writers Association, a national professional organization for journalists and media professionals specializing in education.

“The term ‘school culture’ generally refers to the beliefs, perceptions, relationships, attitudes, and written and unwritten rules that shape and influence every aspect of how a school functions, but the term also encompasses more concrete issues such as the physical and emotional safety of students, the orderliness of classrooms and public spaces, or the degree to which a school embraces and celebrates racial, ethnic, linguistic, or cultural diversity.

“Like the larger social culture, a school culture results from both conscious and unconscious perspectives, values, interactions, and practices, and it is heavily shaped by a school’s particular institutional history. Students, parents, teachers, administrators, and other staff members all contribute to their school’s culture, as do other influences such as the community in which the school is located, the policies that govern how it operates, or the principles upon which the school was founded.”

Let us move from the realm of abstract discussion to specific scenarios. As you read the ones below, reflect on the school culture embodied and reinforced by each of these institutions. Use this list of questions to guide your reflection.

The first scenario is an extract from a news report published by The Washington Post on September 20, 2016. Written by T. Rees Shapiro, it carried the headline “School lunch worker quits after being forced to refuse hot meal to poor student.”

Stacy Koltiska said that she will never forget the look in the little boy’s eyes. As an elementary school lunchroom staffer, her job was to work the register for the children when they paid for their meals.

But the boy had a negative balance on his account, and a new policy in the Canon-McMillan, Pennsylvania school district this year prevents cafeteria workers from serving a hot meal to students who owe more than $25. Koltiska said she had to follow the policy and was ordered to refuse the boy his hot meal because he couldn’t pay for it.

“As a Christian, I have an issue with this,” said Koltiska, of Canonsburg, Pennsylvania. “It’s sinful and shameful is what it is.”

Rather than continue to enforce the policy at Wylandville Elementary School in Eighty Four, Pennsylvania, Koltiska tendered her resignation last week. Koltiska said in an interview that she had worked for the school district for two years. She said she was stunned by the new policy, which began this fall.

Students who were refused the hot meal instead got a sandwich made of two slices of wheat bread and a single, cold slice of “government cheese,” Koltiska said. The contents of the hot lunch, such as chicken nuggets or corn dog bites, were thrown away, Koltiska said, even though parents would still be charged the full regular price of $2.05 for the meal. Koltiska said that she resigned out of a moral obligation.

The second one is an excerpt from Totto-chan: The Little Girl at the Window, a book originally written in Japanese by Tetsuko Kuroyanagi and translated into English by Dorothy Britton. It is a narrative about the adventures of a girl who is expelled from her first school, and subsequently gets enrolled in another one called Tomoe Gakuen.

The headmaster had adopted the phrase to describe a balanced meal – the kind of food he expected you to bring for lunch in addition to your rice. Instead of the usual “Train your children to eat everything,” and “Please see that they bring a nutritiously balanced lunch,” this headmaster asked parents to include in their children’s lunchboxes “something from the ocean and something from the hills.”

“Something from the ocean” meant sea food – things such as fish and tsukuda-ni (tiny crustaceans and the like boiled in soy sauce and sweet sake), while “something from the hills” meant food from the land–like vegetables, beef, pork, and chicken.

Mother was very impressed by this and thought that few headmasters were capable of expressing such an important rule so simply. Oddly enough, just having to choose from two categories made preparing lunch seem simpler. And besides, the headmaster pointed out that one did not have to think too hard or be extravagant to fulfill the two requirements. The land food could be just kinpira gobo (spicy burdock) or an omelette, and the sea food merely flakes of dried bonito. Or simpler still, you could have nori (a kind of seaweed) for “ocean” and a pickled plum for “hills.”

Just as the day before, when Totto-chan had watched so enviously, the headmaster came and looked in all the lunchboxes.

The common thread running through both scenarios is food. Having reflected on examples from the United States and Japan, let us look at what is happening in your own school and other schools in India in relation to food. Use these questions to guide your reflection.

The answers that you come up with might help you become more aware of your own role in contributing to a school culture that might otherwise seem like it is created only by the people at the top of the hierarchy. As an educator, you hold immense power even though it is not absolute power. It would be a worthwhile exercise to think about the choices that you make each day, and what that means for the physical and emotional safety of your students.

The author is an educator, peacebuilder and writer. He has worked with UNESCO and UNICEF, apart from facilitating workshops with students and teachers in various parts of India. He can be reached at [email protected].