One of the most challenging events in a typical school today is the bus dispersal hour. A safe, speedy, and smart see-off is what every school works, hopes, and prays for.

The reason is not far to find. There have been spates of unsavoury incidents involving school buses. Remember the unspeakable tragedy of a girl who would be at the mercy of the bus conductor between the second last and her final stop ? And it was only the other day that a one-year-old boy came under the rear wheels of his school bus and died in the ambulance, on the way to the hospital. There is a growing feeling that students are becoming increasingly unsafe in school buses. Drivers have been known to drink and drive; some are not above misbehaving with girls. There is nary a day in fact that goes by without at least one alarming news item related to school buses. The air has been thick with talk of buses undergoing safety modifications including installation of CCTV cameras and speed governors.

Gone are the days when kids would stream out of huge metallic school gates in a higgledy piggledy stream, happily chattering into the arms of relaxed parents. People lounged languidly in a laid back hush of expectancy I remember. There was a greater sense of security and far less turning around to watch one’s back. I don’t recall this jumping nervously in the skins at the slightest unfamiliarity.

Those were the days of a calmer, more content, well… perhaps even resigned and ignorant India. What we inhabit today is a war zone. There is anger, fear, even envy. A distrust of the government has so coloured our pan-view that we are quick to believe the worst of the other. Unfair generalizations are the stuff social conversations are made up of. A civic awareness of rights and entitlements has replaced plain common sense and civility.

Schools try and compensate by laying out layer upon layer of security. There is a garrison mind-set geared to fool proof dispersal. It is a daily struggle to stay above board. 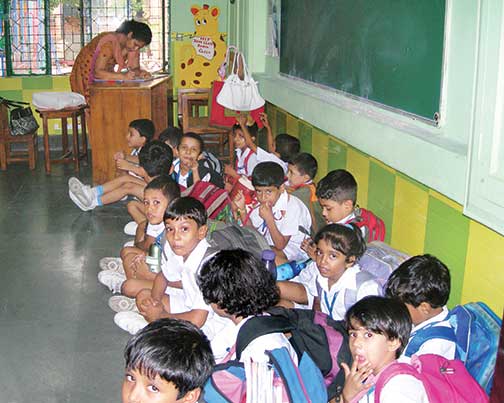 The student strength and number of routes are only two components of a hugely collaborative effort. There are several agencies involved including the gate security personnel, private vehicle drivers, parents, and support staff. A monitoring system is followed in most schools to try and ensure every student reaches home safely. There are cameras on the gates and regular dissemination of updated contact numbers of agencies involved.

In several institutions, the junior wings in particular, bus routes have been assigned classrooms as well as specific teachers who take attendance again at the end of the day, before leading their route students to the bus dispersal area. The children who use the second trip are supervised by teachers until it is time to board the senior buses. In this way, the double attendance works as a quick way to establish any anomaly.

Even so, there are the bad days.

Two snaking rows of second graders can cross each other, a couple of frisky ones getting dislodged into the wrong row unwittingly. It may happen that a child is facing a bus a trifle uncertainly and the mere appearance of a teacher prompts him to quickly hop into the bus that was puzzling him! Children have a talent for losing track of time. While the whole world is going crazy hunting for them, some may be blissfully sliding and swinging in the KG Park at the back. The small ones also happen to have a penchant for escorting the ailing to the Sick Bay and losing themselves in the experience.

There could be explanations galore but the mind of the parent waiting at home goes whirl-pooling thus: has there been a kidnapping; could the child have fallen into a man hole or else, God forbid, run over by a BMW; she could have been lured and raped; a custodial conflict pick up seems like a possibility and on and on the tortuous mind goes visualizing one gory scenario after another.

Nine and a three quarters time out of ten, there is likely to be a simpler explanation. It is very unlikely that a child has gone far and in harm’s way from the school campus. There are small things however that can be of critical help at crucial times. Entering accurate information for instance, in the identity cards and school diaries; labelling the child’s belongings; keeping the school informed of any contact update; all this helps.

There are systems that have been worked out. At the heart of this elaborate blueprint are people. And nowhere in the school is an empathetic co-operation between everyone involved as critical as at the time of leaving school. It is a tricky hour. The students are excitable, teachers low on energy, bus drivers in a rush and parents in a state of expectant anxiety. At such a vital hour, many a times, the secret to success is patience.

It is good to remember that checks and balances are in place and given time, everyone will be home, sweet home, sooner than later!!