The education sector is the main creator/developer of human resources in the society. Ironically, the idea of managing human resources as well as human relations, as prevalent in the corporate sector, is surprisingly entirely absent from academia in India! Having been used to this situation, people have developed a mentality of simply bearing with the troubles and moving on, because in their experience, there is no reasonable forum where their complaints are heard, and the chances of getting timely help are even more remote. At present, teacher grievances are addressed to some extent by tribunals, officers in the departments of education and courts of justice. Clearly, a dedicated forum for this purpose needs to be established at the appropriate scale.

The profession of teaching involves a number of responsibilities in addition to classroom interactions with students. Teachers are held accountable for student scores, student behaviour, school reputation, involvement of local public in school activities, maintaining school documents in addition to student data, interacting meaningfully with parents, providing information requested by officials in the department of education, ensuring that all students get their due share of participation in co-curricular events and competitions, counselling students on various issues – not the least on career choice and so on. Due to the nature of human interaction involved in each of these activities, teachers often face conflicts that are hard to resolve by mutual agreement. Also, a teacher’s job is not always given its due in terms of professional autonomy, security, adequate pay scales, appropriate working conditions, facilities in terms of leave, leisure or retirement benefits, to name a few. When an individual teacher or a group of teachers feel that they are treated unfairly or are not given their rightful dues as promised by the employer, they need to address these grievances to the competent authority to settle the dispute justifiably. This article looks at the avenues available for such redressal of teacher grievances in India.

The basic working/earning rights of all citizens of the country are readily available to teachers. As workers in a public service, most of the labour laws also apply to the education sector of employment. A handy list of these rights can be found in the article “Teachers and the law” published in Teacher Plus, February 2009. Though we hear about and see many problems faced by teachers, usually no strong teacher unions come forward to fight for their rights, unlike the worker organizations in other sectors. The absence of a dedicated fulltime institution to look into problems of teachers, coupled with lack of well-coordinated organizations among teachers has resulted in a rather sorry status in this important area of the education system. Organizations of government employees exist, but they cater to much broader concerns than that of just teachers. Hence their scope is not specific enough to have a real feel for problems of teachers as either individuals or as a community. 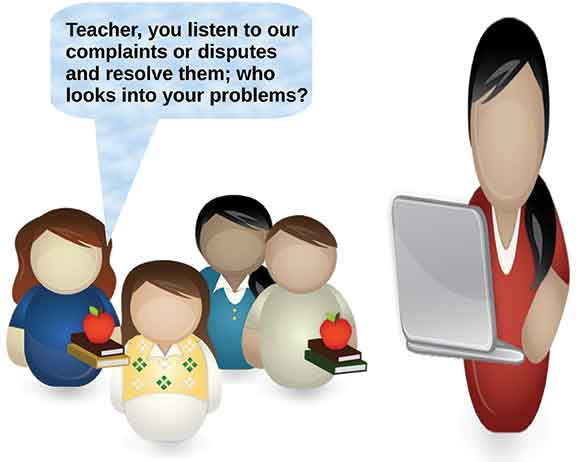 Traditionally, school-level complaints from teachers go to their immediate supervisor, the head-teacher or the principal of the school. If the grievance is either larger in scope or against the principals themselves, teachers have approached either the officers in the department of education (mainly in case of government schools) or the school management and local community leaders (in case of private schools). Sometimes the issue on hand does not get sorted out satisfactorily at this level and is taken to the police or the court, as required.

Analysis, findings and recommendations of a study conducted by the Centre for Law and Policy Research (CLPR) on the use of the courts for grievance redressal by teachers in government and government-aided private schools in nine states in India for the period from 2009 to June 2014 is presented in a report1.

The types of grievances that caused teachers to approach the high courts were very similar across the states. The two most predominant types of grievances related to service benefits, which constituted 47.01 percent of all cases reviewed, and grievances related to appointments, which constituted 33.2 percent of all cases reviewed. While not as significant in terms of volume, there were a number of petitions filed by contract teachers and other teachers appointed on an ad-hoc basis some of which were appealed to the Supreme Court.

The study also reports two alternate forums, namely grievance redressal sessions held by state education officers at the block and district levels and specialized tribunals that are constituted to hear either education related matters or grievances related to service matters for government employees. The report recommends that making rules regarding various aspects of appointments, salaries, duties, promotions and benefits may reduce the number of grievances themselves. The report also notes that it is important to implement the decisions taken by the courts in reasonable timeframes for redressal to be effective.

The experts who crafted the right to education (RtE) act, made the welcome inclusion of addressing the issue of teacher grievances in it. In Karnataka, the RtE document2 states that “The School Development and Monitoring Committee (SDMC) constituted under section 21 shall be the Grievance Redressal Authority for teachers of government and local authority schools and aided schools. In all Grievance Redressal Authority proceedings by SDMC, BEO (Block Education Officer) shall be present. For private un-aided schools, Section 96 of Chapter 14 of Karnataka Education Act 1983 shall apply for Grievance Redressal.” Involving the local community in the form of SMC/SDMC is indeed a good idea. This allows people who are known to the teachers to look into the matter based on their direct knowledge of circumstances. A caveat here is that the community, for some reason, may favour either the teacher or the cause (person/s or situation/s) of grievance.

In order to document the realities of the professional lives of teachers, the National University of Educational Planning and Administration (NEUPA) brought out the report “Teachers in the Indian education system” in 20153. It states clearly that “one aspect of the working conditions of teachers that has received little systematic attention is the avenue available for redressal of their grievances.” This view is corroborated in the book “Political Agenda of Education” by Prof. Krishna Kumar4.

The NEUPA report finds that an executive/administrative mechanism utilized by state governments to redress teacher grievances is to establish specialized dispute resolution tribunals. “Some states also have tribunals for addressing teacher-related grievances for private and aided schools, such as the Jharkhand Education Tribunal and the Rajasthan Non-Governmental Education Tribunal.”

The report has details of the redressal mechanism used in nine states, of which the gist of representative four are quoted/described here. 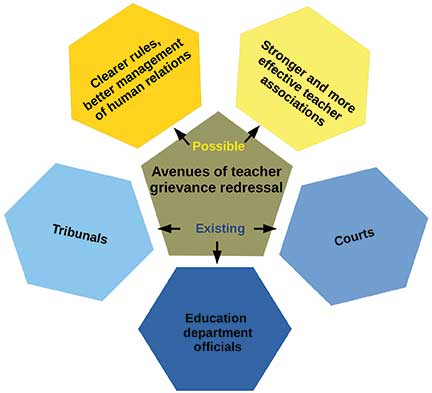 The NEUPA report further notes that the number of cases differ a lot across states but the kind of cases are very similar. Time taken to announce decision is anywhere between a few days to more than five years. As the report suggests, clearer rules in most cases could eliminate some issues even before they arise. “The prevalence of decisions being remanded reveals that nearly a third of the judgments that were disposed by the High Courts did not actually result in closure of the disputes for the teachers involved and may have only set off another cycle of teachers making representations to the state authorities and then challenging their orders in the courts (though we do not have any information on the extent to which this actually happens in practice).”

An interesting fact mentioned in the report is that the presence of teacher representatives as Members of Legislative Council does help to draw attention of the state administration to issues concerning teachers.

In case of Kendriya Vidyalayas, an internal administrative arrangement looks after teacher welfare. On all working days officers available at the headquarters in New Delhi and Regional Offices meet (a) general public/staff for the redressal of their grievances and on issues of mutual interest from 4 p.m. to 5 p.m. (b) principals/principal in charge – one hour on working days from 11.00 a.m. to 12.00 noon (c) teachers – with prior appointment on any working day. (From www.kvsrobangalore.org/)

In order to inquire into charges by a school against one or more students, a school tribunal is often set up. This forum is sometimes open to receiving complaints from teachers as well.

In 2010, a number of bills seeking to reform the education system in the country were presented at the central legislative bodies with special emphasis on higher education sector. One of them was the educational tribunals bill5 introduced in the parliament to establish Educational Tribunals at the national and state levels. These tribunals were supposed to expedite adjudication of disputes in the education sector. The nature of disputes listed included disputes involving teachers and other employees of higher education and stakeholders such as students, universities (including foreign education providers) and statutory regulatory authorities. But this got stuck in the Rajya Sabha and eventually lapsed due to delay in approval! Notwithstanding the lapse, several states do set up such tribunals from time to time, addressing various kinds of issues, complaints and grievances.

It is true that there is an urgent need for stating rules more clearly and setting up regular, efficient tribunals to address teacher grievances. As stated in the beginning of the article, another mode which can reduce and address teacher grievances is by exploring ways of efficiently managing human relations in Indian academic settings. Additionally, if teacher unions/societies/associations are professionally managed, they can take an active part in grievance redressal. At present, they are known to lend advice and support to the individuals filing complaints, but more active participation may be appreciated by one and all. India has strong and functional professional unions or associations of labourers, tradesmen, doctors or engineers, whereas most of the existing teacher associations are just prefunctory – often they do not even perform any academic activities. When the idea of professionalism roots deeply among teachers, leading to regular and fruitful interactions across states and subjects, teacher societies will be able to contribute positively to minimize as well as redress grievances.

The author has been a researcher in biology and an educator, has taught at the undergraduate programme of IISc from its beginning; now freelancing as an independent advisor to academic institutes and teaching faculty. She can be reached at [email protected].

Every question deserves an answer