The word ‘Guru’ is one of the most venerated words in the Indian vocabulary. Though loosely translated as teacher in the English language, guru is a word with much gravity and even divinity associated with it. The guru, apart from being a teacher, takes on multiple roles to shape the character and life of a disciple or ‘shishya’.

The guru becomes a proxy parent, friend, guide or employer as the situation demands. The importance attached to the guru in Indian ethos is best exemplified by these instances. In the Ramayana, Lord Rama himself was the shishya of his guru, sage Vishwamitra. He fulfilled all the duties of a disciple while in the care of his guru, in spite of being an incarnation of the almighty. On the other hand, Lord Krishna took on the role of the guru to Arjuna and imparted the most profound life lessons in the form of the Bhagavad Gita. The sacred bond between the guru and his disciple manifests in several forms in ancient Indian texts. 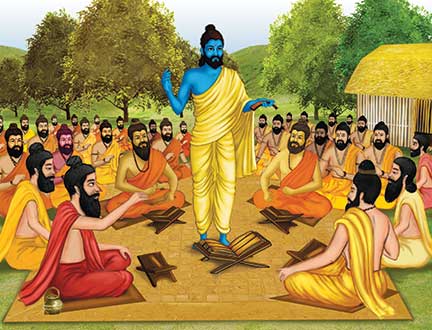 In fact, one of the common threads that bind all the religions that emanate from India such as Hinduism, Jainism, Buddhism, Sikhism is the ‘Guru Parampara’ or the tradition of guru lineage. An unbroken chain of gurus have imparted life lessons to the masses, lessons relevant to the times that they lived in. Though the guru was seen as a proponent of religion and spirituality, he also imparted worldly knowledge – sciences, mathematics, nature care, art and even the art of warfare.

The gurukul tradition was the epicentre of learning in ancient India. Children at a very early age were sent away from their homes to the foster care of the guru. Whether they hailed from royal dynasties or were from a clan of Brahmin priests, the children were given a home away from home in the modest, even austere surroundings of the gurukul.

At the heart of this tradition is the fact that the guru did not benefit monetarily from the service he was providing to society by educating the young ones. The basic motive was entirely altruistic, to share his own wisdom and pass it on to the next generation.

The students for their part treated the guru’s word as sacrosanct and dedicated their young lives to the service of the guru. Since the children became members of the guru’s household as long as they were under his guardianship, they were also responsible for completing several household chores during their stay at the gurukul. The lady of the house would allocate tasks and the children would learn the key survival skills of cooking, cleaning, washing, horticulture among others.

The onus of supporting the gurukul with financial and territorial security was with the society and the royal kingdom in power. Thus, the guru was not burdened with worries of running his household, he could focus entirely on his young wards. This reciprocal relationship between the gurukul and the society was the cornerstone of the Indian civilization.

The austerity and the classlessness in the gurukul ensured that the children forgot about their family circumstances or status in society. This was a major factor in character building for the young ones as they went on to become learned leaders and rulers.

However, there was a key point of discord that arose as a consequence of the gurukul system. The system by and large excluded girls and children from lower caste families. Girls were primarily home tutored and the lower castes were left to educate themselves. You might recall that while Rama gained his wisdom in a gurukul, Sita was home-tutored by King Janaka. And the other stark example of exclusion was when Acharya Drona refused to admit Ekalavya as a pupil along with the Pandavas and Kauravas.

The modern system
The seeming lack of inclusiveness was one of the key reasons for the decline of the gurukul system and the rise of the modern school education system. The other reason is perhaps a lot more prosaic. The exalted guru, over the years, diminished in stature and became a rather mundane teacher. Simply because he lost his altruistic motivations and was driven by ordinary material needs. 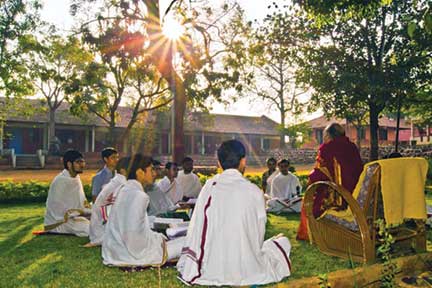 The concept of modern day residential schools is somewhat derived from the ancient system. Primarily, the idea of bringing together children from varied social backgrounds, geographies, languages and getting them to learn under a common institution. However, the rote learning and military regimen could be done away with. And the beautiful method of experiential learning from the ancient system can be adopted. Some other aspects that are worth adopting from the gurukul system are – holistic learning and human development, honing individual abilities of children, tuning the learning methods to suit the current social context and learning to live in harmony with nature.

Talking of the modern day reminds me, a swanky new school has come up near my home. You would be forgiven for mistaking it to be a mall or a multiplex. There is a beeline of celebrities who are gracing the premises week after week on the pretext of some charity event! No points for guessing that they had a fabulous turn out at the admissions last month. New schools are not a novelty in my part of town. Being a new suburb built around the IT industry mania, all the social infrastructure is getting built from scratch. However, this new school has a unique distinction. It calls itself a “Gurukul”! And it’s got quite a tag line too – Education made so cool!?!?

Thankfully, there are some genuinely committed institutions scattered around the country that are running as per the ancient gurukul system. They are very few and very low key to attract the attention of the masses. But they are doing a fabulous job upholding the heritage. The gurukul tradition of learning has been enmeshed with Indian society for generations. It is resilient enough to survive for another few generations, albeit in newer avatars!