A simple search online for ‘school safety in India’ brings up innumerable news pieces highlighting the plethora of security issues that schools across the country continue to grapple with. From infrastructural shortcomings such as crumbling, dilapidated buildings to lapses like unsupervised areas that strangers can sneak into, the risks are alarming, even overwhelming.

The National School Safety Policy Guidelines (NSSPG) define ‘school safety’ as the creation of safe environments for children starting from their homes to their schools and back. This includes safety from large-scale ‘natural’ hazards of geological/climatic origin, human-made risks, pandemics, violence, as well as more frequent and smaller-scale fires, transportation and other related emergencies, and environmental threats that can adversely affect the lives of children.

In addition to this, the Central Board of Secondary Education and (CBSE) and other relevant organizations prescribe a variety of rules and regulations aimed at safeguarding school-going children. Just last year, after two incidents of gruesome school crimes in the National Capital Region, the CBSE issued new security guidelines such as safety audits of schools done by their respective local police stations, installation of CCTV cameras, limiting the entry of outsiders and thorough background checks of all employees. Shortly after, the Supreme Court directed all state governments to ensure that the guidelines were implemented in “reality” in every school of the country. 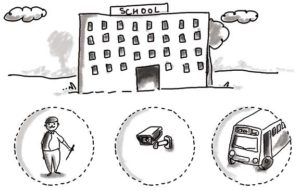 But a year on, it is difficult to determine how exactly and to what extent these regulations are functioning. According to a Times of India article published in June 2018, out of 752 schools that were randomly audited by the police in Nagpur, not even one was able to fulfil all 13 criteria mandated for the safety and security of students. The audit brought to light some worrying statistics about school safety in the city: 80 per cent of the audited schools had not completed police verification of the staff that routinely spent time around children; 76 per cent did not follow all school bus safety guidelines; 49 per cent did not even have a single security guard; and almost 46 per cent did not have CCTVs installed on campus. Schools attribute these shortcomings to lack of finances. While government aided schools face a severe crunch in terms of not being able to charge a fee, unaided schools do not have much budget left after spending on teacher salaries and marketing efforts. This scenario from just one city reflects similar issues being faced nationwide. For instance, in August 2018, several schools in Noida and Greater Noida failed to submit the required affidavits stating that they abide by the safety guidelines. In the same month, children at a government school in Odisha had a narrow escape when plaster fell from the ceiling.

There is also the issue of a disconnect between the school system in most states and policy linkages with various government bodies responsible for education management. For instance, infrastructural development of a school campus may be funded through the Mahatma Gandhi National Rural Employment Guarantee Act (MGNREGA) but it cannot be executed effectively without convergence with the School Development Plan.

“The issue is not seeming from a lack of laws but rather a lack of practical measures to implement simple systems that can protect children,” says Abha Singhal Joshi, a Delhi-based independent legal services provider. “There is a lack of regulation at every level which makes children incredibly vulnerable, not just within the school campus but outside too, particularly while on the way to school or back,” she added.

More recently, on August 9, 2018, a 6-year-old boy from a municipal school in New Delhi was told to go home for arriving five minutes late to class. The child lost his way and went missing for a week, finally being found at a shelter after his photo was circulated on WhatsApp. “There is an urgent need for complete digital linking among the civic agencies. Hundreds of children go missing every month and many are rescued and housed in shelters, but due to ineffective coordination among the authorities, they remain untracked,” said Swati Maliwal, Chairperson of the Delhi Commission for Women.

“To make the school system safer, it is extremely important for parents and teachers to be closely involved with a child’s life,” adds Ahmedabad-based cognitive behavioural therapist Phoram Trivedi. “They must take interest in children’s day-to-day activities and get to know who exactly they are interacting with on a daily basis. Be open with children so that they are able to confide in you about the slightest things that make them uncomfortable. Offenders use threat and guilt as a way to silence children, so it is imperative for parents and caretakers to relieve children of any emotional burdens and always stand by their side,” she advises. 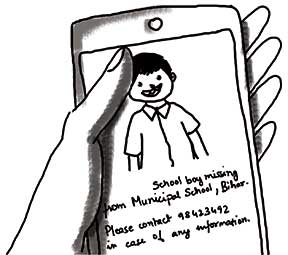 As of September 2018, the Union Ministry of Human Resource Development (MHRD), in consultation with the National Commission for the Protection of Child Rights (NCPCR), has framed additional guidelines asking schools to have a comprehensive child safety plan – with the involvement of PTAs in case of private schools, and the School Management Committee (SMC) at government schools.

If schools are found to be breaching safety norms, parents can report them to government authorities, who can impose a fee of between 1 per cent to 5 per cent of the school’s previous year’s income for every subsequent offence. Schools that continue to flout safety norms can be taken over by the government and have their registration cancelled. But if schools start closing down for notoriously common issues such as poor construction or inadequate fire safety, thousands of children may end up losing access to even basic education.

“Moreover, schools are not the only places where children are at risk,” adds Joshi. “What about religious institutions like ashrams and madrasas? Parents trust these places blindly and they rarely come under the scanner of authorities. Moreover, we have lot of informal home-run play-schools and day care centres that are not officially registered. These can also expose children to safety hazards and crime,” she points out.

Yet another dimension comes into play when we consider the role of technology. More and more children are using the social media with limited understanding of how to stay safe online. This increases their vulnerability to being approached by criminals who, under the guise of friendship may exploit them in multiple ways.

As Phoram Trivedi emphasises, “It all comes down to the support system that we can provide to children. We need to adequately educate them about how to stay safe but we have to do so in a gentle and respectful manner, without being overbearing or overprotective. When children feel understood and respected, they are more likely to communicate about any potentially dangerous situations they may be facing in order to get timely help.”

On the whole, the school system is a microcosm of the society, reflecting greater issues we face as a nation, from the negligent attitudes of those in authority to a disconnect between various stakeholders; from loopholes in implementing strong government polices to a reluctance for getting involved with legal proceedings.

Making schools safer is not a onetime effort but rather, a continuous process that requires all stakeholders to gain a deeper understanding, sensitivity and overall response capacity towards the issues on hand. Safety principles need to be incorporated in the day to day functioning of all educational institutions in coordination with state authorities. Moreover, schools and families need to be more vigilant about risk factors and proactive about dealing with them.

The author is a writer based in Ahmedabad. Know more about her on www.mehaksiddiqui.com.

Creating safe environments
How safe are our children in school?
Safe, not straight