Right in the middle of a grammar lesson for sixth graders, a noisy, garbage truck pulled up right in front of my classroom window. There was a woman driving the truck. She got out and was wearing a yellow jumpsuit and a baseball hat. She proceeded to pick up trash cans and dump the contents into the back of her truck. The entire class was staring out the window. They were mesmerized by the large, loud scene and they stared out the windows as if they were huge television screens. I was headed for the blinds to stop this distraction. Suddenly, I had an idea.

“Everybody, stand up and come over to the window.” They jumped out of their seats and came over. “In the future, we are going to study literature. Literature is basically a bunch of stories written down. These stories have certain elements to them. Let’s analyze some of these elements. First you have a main character. Look out of the window and tell us who the main character is?”

“A garbage woman,” yelled one kid.
“A garbage lady,” said another.
“Good,” I replied. “Then we have a setting. That is all the stuff around the character. Describe all the things you see.” 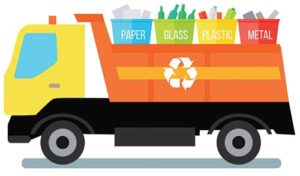 “The woman has to get the garbage in her truck.”
“Very good,” I responded. “Let’s move on to tone. What attitude does the character have?
“Negative,” said one child.
“I don’t think she likes this smelly job.”
“Those trash cans look heavy, I don’t think she likes this job.”
“Good observations,” I said. “How about theme? Theme is the main idea that weaves the story together. What is the underlying or hidden idea in the story?”
One student raised his hand. “Do you mean, like, why is she doing it?”
“Go with that idea,” I said.
“She needs the money.”
“She does what she has to – to survive,” said another student.
“Some jobs suck!”

Since the garbage lady was almost done, this was a good time to get the students back into classroom mode. “Take your seats,” I said. “Let’s see how good your memory is. The details and specifics often make the story more interesting.” I closed the blinds and asked them to remember what they had just seen. I asked them, what colour the baseball hat was, was she wearing gloves, what colour shoes was she wearing, how many trash cans did she empty into the back of the truck. The children were trying very hard to get a mental image of what they had just witnessed. I continued to ask questions. What kind of cars were in the parking lot, how many tyres did the garbage truck have, what did the backup beeper/alarm sound like, and other questions. It became an interesting game to them. This annoying distraction became an interesting lesson that even incorporated sight, sounds and smell. At the end of class everyone knew the basic elements of literature and they had acquired and eye for detail.

Lessons Learned
• Try to turn a negative into a positive.
• Experiment with new ideas. Dare to be different.
• If something catches the attention of the students, use it to accomplish your objectives.
• Learning can be fun. Can you turn it in to a game or challenge?

The author is now out of the K-12 classroom and is an English Professor at Indiana University of Pennsylvania. He can be reached at [email protected].