The phenomenon of climate change, in terms of change from glacial to interglacial and back, has been there ever since the origin of Earth. Geological evidence for climate change is well preserved in the sedimentary rocks, fossil flora and fauna. The fact that extremely warm and cold climatic conditions on Earth have been recorded as long ago as 600 million years (Palaeozoic era) challenges man’s belief that climate change, particularly global warming, is the result of increase in GHG (greenhouse gases) in the atmosphere. Planet Earth witnessed very warm conditions during the Tertiary Period (65 to 2.6 million years ago), and the climate during the Quaternary Period (Great Ice Age) oscillated between glacial and interglacial conditions from 2.6 million years ago to the present day. The major climatic changes at the Cretaceous/Palaeogene boundary (~ 65 million years ago) were due to the abrupt changes in ocean acidification. Similarly, during the Palaeocene-Eocene Thermal Maximum (~55 million years ago), another rapid ocean acidification event led to an increase in the marine species, which were more suited to warmer conditions. 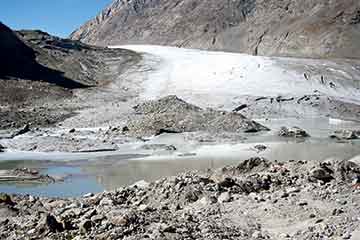 Geological records show that climate change is not the result of human interference alone but of a mechanism beyond human interference. The Little Ice Age (LIA) is a climatic anomaly that lasted from almost the 13th to the mid-19th century around the globe and coincides with the Maunder Minimum of reduced solar irradiance that favoured cold conditions. Besides this, 16 events of volcanism coincided with the cooling events between 1630 and 1850 of the LIA. The event of 8.2kyr (8,200 years BP), widely recognized in the North Atlantic area, is caused by the result of catastrophic outflow of proglacial lakes that weakened the ocean thermocline circulation.

Mountain building processes represent the type of geological phenomena that have been largely responsible for absorbing excess carbon dioxide in the atmosphere through the process of chemical weathering and transferring excess carbon dioxide to ocean bottoms. The building of mountains from time to time provides excess land surface for weathering agencies to operate upon. As a consequence, carbon dioxide in the atmosphere is consumed in the process of chemical weathering, leading to lowering of the temperatures and cooling of the Earth. This mechanism has been responsible in developing cool-warm cycles in the past on millennial scale. The atmospheric carbon dioxide is being pushed deeper into the oceans than previously thought. Oceans continue to absorb human emissions of greenhouse gases more rapidly, reducing the impact on global warming. But, human activities are rapidly changing the chemistry of the deep oceans. 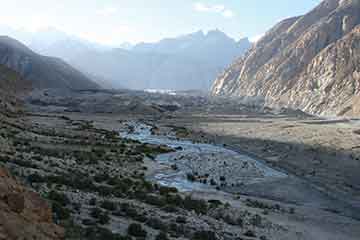 Climate, an extremely complex phenomenon, is simultaneous or a successive interplay of physical, chemical, and biological parameters. The change in orbital parameters (Milankovitch) and frequent variation in GHG by natural and anthropogenic processes further compounds the complexity. Glacier or moving ice bodies in high mountains are considered to be sensitive to climate change. The impact of climate change (positive or negative change in atmospheric temperature) is translated in terms of change in the mass balance (gain or loss of snow and ice over a hydrological cycle). The accumulation (addition of snow to glacier) and ablation (melting of snow from glacier) of glaciers is a direct reflection of the cooling and/or warming of the atmospheric temperature. Even the most minuscule change in atmospheric temperature affects the magnitude of accumulation and/or ablation that translates into the change in the size of the glacier over a period of time.

The Himalayas are a storehouse of about 13,500 glaciers (as per the inventory of Space Applications Centre, Ahmadabad) with a glacier coverage of 33,000 square kilometres. The mountain range has acquired the name“water tower of Asia”as it provides around 9 cubic million water to the region annually. The water that melts from the ice and snowfields is important in regulating the hydrology of the Indian sub-continent. Though it contributes only to 5 per cent of the total runoff, its significance lies in the fact that the melt water is released in the dry season when most rivers in extra-peninsular India do not have rains. It is estimated that glaciers in the Himalayas occupy about 17 per cent of the total mountainous area while an additional area ranging from 30-40 per cent has seasonal snow cover.

Any depletion in melt water flow from the glaciers situated in the Himalaya will seriously affect the region’s economy by limiting the energy generated from hydropower plants and hampering industrial productivity. India is already facing a power shortage of about 10 per cent of the total electrical energy required and about 20 per cent of peak capacity requirements. Several industries, such as food processing, mining, paper, chemical and steel production, which require sufficient and reliable supply of water, both as input to the manufacturing process and as a medium for the dilution of effluents, will also be affected. Water in India is a critical factor and sometimes a limiting constraint for socio-economic development because of the highly variable distribution of water resources, both temporarily and spatially driven by the monsoon climate, but also because of the ever increasing demand and consumption of water as a result of population expansion and economic growth.

A mention in the Intergovernmental Panel on Climate Change (IPCC) Assessment Report (AR) 4 of the year 2007 about the complete disappearance of Himalayan glaciers by 2035 AD took the scientists of India working on glaciers and climate change by surprise and shock. Scientists in India have been monitoring some of the Himalayan glaciers for more than a century and recording fluctuations in the glaciers periodically to understand how climate change impacts (if it does) the health of the glaciers. The studies from the Himalayas have been revealing with respect to the much hyped theory of global warming and melting of glaciers in the world. 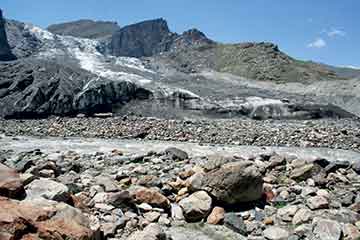 The scientific study of Durung Drung, Kangriz and Siachen glaciers (Ladakh region) are contrary to the view that glaciers in the Karakorum are retreating at an alarming and abnormal rate. The scientific study of the glaciers of Karakorum Ranges of Pakistan-occupied Kashmir also does not suggest any major changes in the snow cover and glaciers since 1970. On the other hand, Baltoro glacier has shown steady advances since 1950 and more than 30 other glaciers in Pakistan’s territory are advancing (where the snout of the glacier has moved forward from its previous position). Some of the glaciers that are small in size and which were expected to be victims of global warming have not shown much change in their shape or size in the past century. The best example is that of Machoi glacier, Zoji La, Kashmir Himalaya.

The scientific revelations about the Himalayan glaciers in the form of “Discussion Paper on the Status of Himalayan Glaciers” prepared by Sh. VK Raina, a noted glaciologist of the country, and released by the Ministry of Environment and Forests, Government of India challenged the claims of IPCC – AR4.

There is no match between the behaviours of the Himalayan and Alpine glaciers. The inter – and intra – annual variation in weather parameters are some of the factors that decide the appreciation and/or depreciation of the Himalayan glaciers. Intensive scientific investigations of some of the benchmark glaciers of the Himalayas are undertaken by the Inter-University Consortium on Crysosphere and Climate Change (IUCCCC) – a consortium of four universities namely University of Jammu, University of Kashmir, Jawaharlal Nehru University and Sikkim University. The research studies on the Himalayan crysosphere by IUCCCC feeds the National Mission on Sustaining the Himalayan Ecosystem that forms a part of eight missions under the Prime Minister’s National Action Plan on Climate Change. Understanding the response of glaciers to the changing climate is a challenge for geoscientists today and for IUCCCC. Arriving at the simple conclusion that global warming is the major cause for the melting of the Himalayan glaciers seems to be a premature statement.

Begin a discussion on the Himalayan glaciers and the effect they have on the surrounding regions by showing these video clips to the class:
http://www.bbc.co.uk/learningzone/clips/the-mountains-and-glaciers-of-the-himalayas/10565.html
http://www.neok12.com/video/Glaciers/zX457c067c60500a41185d7f.htm

The Himalayas are home to the most unique flora and fauna. Let the students find out the names of the plants and animals in this region and study how they adapt to the harsh Himalayan climate. Has climate change affected the living beings in this region?

The Inter-governmental Panel for Climate Change in its report in 2007 predicted that the Himalayan glaciers would disappear by 2035. However in its latest report, IPCC admitted that it made an erroneous assessment. Let the children find out more about this controversy and what lead the IPCC to change its stand.

The author is Professor & Head, Department of Geology, and Director, Institute of Himalayan Glaciology, University of Jammu, Jammu. He can be reached at [email protected].