In this edition of Teaching and Learning Moments, Chaitanya speaks about his early tryst with theatre; growing up among academicians and theatre experts to changing course to learn math and science and then coming back and finding himself in theatre.

Here is an excerpt from the interview. 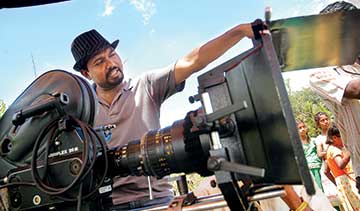 Finding ‘Home’ in theatre
I belong to a family of academicians and teachers. My mother completed her masters after I was born. So she would very often leave me at the Kannada poet and playwright Lankesh’s house. So I was exposed to poetry and literature very early in my life. Many people from the literature and theatre groups visited my house to discuss their plays and latest works. Many legendary theatre directors like Prasanna and B V Karanth used to come home to interact with my father, who was a theatre expert. I saw their plays, but I never entered theatre formally. I remained entangled in my own academic studies and childhood challenges.

Many years later, there was an opportunity to work with the theatre director C R Simha from the theatre group called Nataranga. He was casting for a play called Thaledanda by Girish Karnad. And my father asked me if I would like to audition for this play. I went ahead even though I had no exposure to theatre. There were many established actors in Nataranga and I realized that the casting was already complete. However, I landed up with a minor role of a soldier and had to deliver one line in the play. Rehearsals went on for three hours every day for over three months and I attended each one of them. Somehow, I felt that I had finally found my kin there. I had always felt like I was the odd one out in my class and college, but suddenly here, among so many artists who were so different from me, I found my home. That’s how my theatre journey started.

Director is not a creator
Team work is very important in my profession. A lot of people who want to become directors grow up with this notion that directors are dictators. There has been no spelling mistake there. He is called a director because he shows the direction for the team to go in. And whenever I try to train people, I train them to work with a group as a creative whole. That’s how cinema making or theatre works. There are a lot of people on the sets. It is not possible for the director to say, this is the way and this is the only way. If one does that, then one is wasting the creative energy of such a large capable team. A good director has to build a team of intelligent, creative people, take everybody’s inputs and take the team together towards one single vision. This is what I try to teach in all my lectures and also to my assistant directors. I believe in creating a democratic space. After all, film creativity is about accepting multiple points of view.

You can listen to the complete two part interview at:
Part 1: http://yourlisten.com/BolHyd90.4/tlm-with-teacher-plusbol-hyderabadchaitanyalakshmipart-1
Part 2: http://yourlisten.com/BolHyd90.4/tlm-with-teacher-plusbol-hyderabadchaitanyalakshmipart-2

The interviewer and writer is an educator based in Bangalore. She can be reached at [email protected].