With the elections in Himachal Pradesh and Gujarat slated for November/December, and the Congress party running from pillar to post to hold their shaky alliance together at the Centre, political pundits in the various media have been predicting that the largest democracy in the world will be going to polls sometime next year. Now, we all know what ‘democracy’ means. The word comes from the Greek ‘demokratia’ meaning ‘popular government’; ‘demos’ means ‘common people’ and ‘kratos’ means ‘rule or strength’. It is a form of government that supposedly represents the strength of the common people. But is the brand of democracy practised in India truly a reflection of the strength of the ‘aam aadmi’ (or ‘mango people’ as Robert Vadra so facetiously labels us)? With the never-ending list of scams emerging from the not-so-bare cupboards of all prominent political parties, we seem to be moving away from democracy and inching (some would say ‘rocketing’) towards another form of government. Some would call it a ‘kleptocracy’. In Greek, ‘kleptes’ means ‘thieves’; ‘kleptocracy’ means ‘ruled by thieves’. Dictionaries define this term as “a government or state in which those in power exploit national resources and steal”. So, what kind of ‘cracy’ do we live in? I leave that for you to decide. 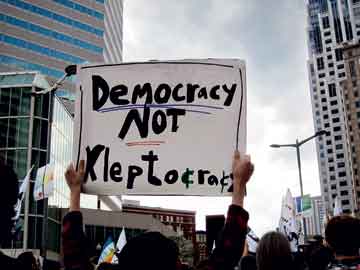 Unlike the politicians of most other countries, the one of Indian origin is always clad in dazzling white. When a candidate hits the campaign trail running, he is mostly seen shaking hands with and receiving garlands from the hoi polloi wearing starched white khadi. Of course, the pessimists among us would argue that the attire is the only thing spotless about the individual. But I digress, for it is neither here nor there. In making white an integral part of their dress code, our politicians are following an ancient Roman tradition – talk about the Italian connection! During the height of the Roman Empire, when a person appeared in public immaculately dressed in a white toga, it was his way of announcing to the world that he was running for office. He was a candidate. In fact, the word ‘candidate’ which comes from the Latin ‘candidatus’ originally meant ‘person dressed in white’. Slowly with the passage of time, the word acquired its modern meaning of seeker of public office. It is from ‘candidatus’ that we get ‘candid’ meaning ‘white’. A candid person was seen as someone who was white as snow; a person without a blemish. As he had nothing to hide, he was honest and forthright in his dealings. A far cry from the mealy-mouthed politicians of today!

When a ‘candidate’ decides to take part in an election, he spends most of his time out in the open – visiting new towns, villages and cities and talking to people – in his attempt to woo the electorate. The few weeks/months that he spends zipping from one place to another trying to garner support is called a ‘campaign’. Like the Generals in the past, our ‘men in white’ devise strategies to emerge victorious in their war. The word ‘campaign’ comes form the Latin ‘campus’ meaning ‘field’. In the past, campaigns between armies took place in the open fields/ground; today when a candidate ‘campaigns’, like the soldier, he is ever present in the field of action braving the elements. Nowadays, of course, the word ‘campus’ immediately brings to mind a school or university campus. The original meaning of ‘campus’ was the ‘field’ on which an educational institution was situated.

While he is on the campaign trail, the politician must think of clever ways of galvanizing the voters into casting their bullet. Oops, I’m sorry, I mean ‘ballot’. But then, I’m not entirely wrong for both ‘ballot’ and ‘bullet’ mean the same thing. This perhaps explains why in some parts of our country ‘police firing’ is a common feature on the day of elections. The word ‘ballot’ comes from the Italian ‘ballota’, and literally means ‘a little ball’. Unlike the voters of today, the Ancient Greeks did not have electronic voting machines or pieces of paper on which they marked the candidate of their choice. All they had were small coloured balls made out of stone or marble. If the voter favoured a candidate, he dropped a white ball in a container; if he did not like the candidate, he dropped a black one. It is from this practice that we get the expression ‘to blackball someone’.

Very often parties provide an incentive for people to vote for them; just as you and I are often forced to provide a sweetener to the sleepy auto-rickshaw driver to take us to the station. We have no qualms about giving the man who hauls the LPG cylinder into the kitchen his ‘chai ka paise’, lest he creates problems the next time we need a cylinder. In most other countries, these sweeteners that we feel obligated to dole out as a matter of routine would be labelled ‘bribes’. Usually when we think of a ‘bribe’, the picture that the mind conjures up is that of a suitcase full of money. The original ‘bribe’, in fact, had nothing to do with money. In American English, in informal contexts, money is frequently referred to as ‘dough’ and ‘bread’ – and that is what the French word ‘bribe’ originally meant: a ‘lump’ or ‘piece’ of bread. In the old days, it was common practice among the affluent that lived in cities, to carry pieces of bread in their coat and trouser pockets. When beggars who infested the streets harassed these individuals, they would dip into their pockets and throw several pieces of bread into the air. While the beggars fought for the pieces, the harassed pedestrian made good his escape.

In the end, when the bribes have been paid, the ballots have been counted, and the candidate emerges victorious, how does he celebrate in private with his inner circle of ‘friends’ who made victory possible? He eats, drinks and makes merry. Bottles of champagne are sometimes popped open and the contents greedily consumed. You may wonder why I am talking about the fizzy stuff when the focus of attention should be on candidates and democracy. Don’t the words ‘campaign’ and ‘champagne’ sound very similar? They should, for they come from the same Latin root ‘campus’. The French added the letter ‘h’ to ‘campus’ and began calling the area in northwest France which had open fields and hills ‘Champagne’. Soon the wine that came from the many orchards from this place was given the same name – ’champagne’. Bottoms up!