The most sought after skill in education today is an ever-growing demand to know how to code. But what is coding? Many of us who have not grown up with computers like the digital natives of today will be wondering whether it involves complex calculations that require a mathematical genius to decipher. Ask a child, however, and they will quickly reply that it is how they make their computer do ‘cool things’.

The nitty gritty of programming and coding are an intrinsic part of their worlds – they are developing skills that allow them to build websites, apps and games. 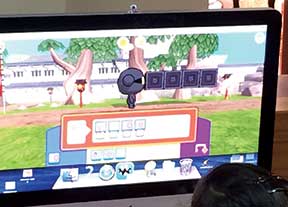 Coding is nothing but a set of instructions that tell these websites, apps, games or software what to do. Without coding, or computer programming, we wouldn’t have any of the major technology that we have become so habituated to like Facebook, the websites that we regularly use, apps that we use on our smartphones, or indeed the software that was used to write this article!

Coding or computer programming is being introduced in elementary schools the world over, with some countries even making it a compulsory part of the curriculum. Exposing students to coding early helps demystify an area that can be intimidating.

The Hour of Code, is a movement started by Computer Science Education Week and Code.org that reaches millions of students in more than 180 countries through a one hour introduction to computer science and computer programming. The Hour of Code offers a variety of options that span across age and gender to appeal to learners to start coding. Best of all, it is free and accessible through any web browser.

Starting at age 5, all students in England, for example, learn the basics of coding and at the age of 11, they are instructed how to use at least two programming languages. In Estonia, first graders are taught how to create their own computer games. In India too, some schools offer coding in their primary curriculum.

The benefits of learning how to code are immense; it introduces the concept of ‘computational thinking’, where a child learns how to think sequentially, break up a complex problem into smaller, easier to solve problems and hones his/her analytical and creative abilities.

For young learners, the ability to bring their code to life as they have imagined it becomes an inspirational experience that experts say opens up the doors for them to become innovators and creators.

The Raspberry Pi Foundation offers lesson plans and other resources to teachers, especially those at the primary level who lack specialized training. In an interview to the New York Times, Clive Beale, the foundation’s director of educational development said, “Instead of passively using a tablet or a laptop, it’s the first time they’ve made a computer do something. The end goal might be to send a camera into near space for a science project, it can be investigating math, it can be robotics and there’s some fantastic art stuff, along with applications in music and even gym class.”

There are a vast array of programming resources available online and an ever increasing number of apps that allow users to code and try their programs on a web browser right away to see if they work.

Scratch is a popular visual programming language that has been developed by the MIT (Massachusets Institute of Technology) Media Lab. It has been designed especially with the aim of encouraging young learners to code. It can be used to create animations, games and even interactive art. Scratch is a stepping stone to more complex programming languages. The interface is visual and the commands snap together much like Lego blocks. In my personal experience as a teacher of computer studies, I have found most of my students rate Scratch as ‘the coolest thing’ that they have learnt in my class. Scratch was included in the curriculum four years ago for grade five and today it is introduced in grade two! The projects that the students have created in Scratch range from drawing and programming a ‘mini’ version of themselves that dances, interactive art, mazes, racing games and a brick breaker game. All this, at ages 7, 8 and 9! Students are raring to go after the introduction of the lesson and the computer lab is buzzing with several ‘Eureka’ moments. 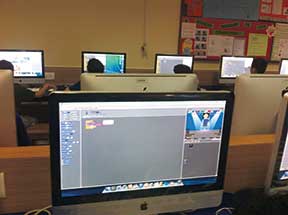 Logo is another computer language that works well with primary learners. Logo is known for its use of turtle graphics, in which commands for movement and drawing provide line graphics with the ‘turtle’ on the screen. I have used Logo with my primary students (prior to Scratch) to execute spirograph like iterations and even fractals! Students who did not know the concept of angles until later were able to program the turtle ‘in the language that it understood’ to create these entirely math based drawings.

Apps like Tynker, Hopscotch, The Foos and Scratch Junior are available to download and use on iPads, making coding visual and easily accessible. Scratch Junior, in fact, can be used by children as young as two years of age!

Computer Science is different from the other streams of science in that, the student who writes the algorithm (the series of instructions) is inventing the rules of the game. To be successful, the student must be able to express ideas clearly, without any ambiguity, using precise terminology. There are usually several solutions to a problem and the student must analyze the problem and then they have the freedom to creatively approach it in any way they deem fit. The concept of algorithms is subliminally learnt by young children in even board games like Parcheesi or while solving a maze. There are several offline activities that can be used to introduce computer science, for example, puzzles that they must decode and decipher.

Of course, not every child will become a computer programmer or computer scientist, but, indeed every child can benefit from learning how to code at an early age. Coding nurtures the most incredible innovation and creativity in students. Code is the magic behind technology and by training children in coding skills we are giving them what they regard as superpowers!

The author is a graphic designer and a computer studies educator. She teaches at a prestigious school and holds classes for children as well as adults. She can be reached at [email protected].