E. B. White’s masterpiece novel Charlotte’s Web, which the author describes as a tale of “friendship and salvation, a story of miracles – the miracle of birth, the miracle of friendship, the miracle of death,” also makes a small miracle happen in its 1972 cartoon version, (featuring the voices of Debbie Reynolds, Henry Gibson, Paul Lynde and Agnes Moorehead) – by holding even today’s 3D and gadget obsessed youngsters in complete thrall.

Delightfully animated and with the most charming songs whose lyrics could well make for singing classes, the film concerns an unusual friendship between a spider and a pig – but is that all? 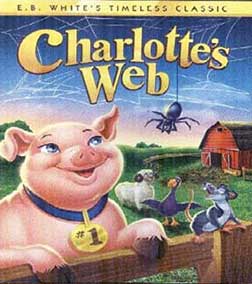 What is the film about?
“It tells of caring and learning to give. Through the character of Wilbur the pig, the film shows how one matures and mentally grows up. The film did not try to hide or pad over anything. There were funny moments, but one didn’t have to laugh at all of them. One was with the characters and felt their distress.” Alia, Std 7.

Do you think that there is enough humour in this film to make it a cartoon? Some viewers feel that Charlotte’s Web doesn’t bring on enough laughs, and it is too sweet to be a cartoon and too sweet to even be real.
“We laugh at the most cruel acts in a cartoon, thinking it’s funny to see a cat being smashed on the head with a pan. In several cartoons, characters are pushed off buildings, tossed into wells or even worse. In the film, the little gosling, Jeffrey’s first question was, “Can I help?” Most of us are not used to watching cartoons that have kindness like this in them. I disagree with those who think kindness and friendship are almost impossible. If everyone made the effort to be kind to one another, the world would be far less chaotic. I don’t see why it can’t be real. It is unfortunate that people only enjoy laughing and they think it’s a waste of time to learn about friendship from a movie about a pig and a spider on a farm.” Sanaa, Std 6.

What did Charlotte’s Web make you think and feel?
“Charlotte’s Web made me think about myself as a friend and what it is like to be a real one. Friendship is more about who you are inside, and not about how you look, or even if you are the same type or not. Charlotte was a spider and Wilbur was a pig, but she didn’t care about that and wanted to help because she felt he had a good heart. She didn’t judge him by his appearance. And when Wilbur first heard Charlotte’s voice, she was invisible, but the fact that she wanted to be his friend made his heart fill with joy and he didn’t worry about who she was or how she looked.

It is not enough to provide lots of love and affection upfront and let go later. Fern gave Wilbur all the love and affection she had when she was little. But as time passed by Fern sort of forgot about him. At the fair, when Wilbur was sad and needed real encouragement, Fern went away with someone else. This hurt Wilbur’s feelings. Charlotte remained constant throughout and came down at the fair and helped him build his confidence.” Antara, Std 4.

Did you think that the action in the film was too slow?
“In other cartoons like Kim Possible or American Dragon there is lots of frequent action. There are people jumping off buildings, turning into dragons or throwing explosive golf balls. These cartoons need action to stay in focus. In Charlotte’s Web the most important action becomes the centre of the story — the weaving of the letters in the spider’s web. In time, Charlotte’s Web will become the new type of cartoon once again.” Nikhil, Std 6.

There are other cartoons which hold great pleasures – One Hundred And One Dalmatians (1961), The Aristocats (1970) and the ever popular and very witty Jungle Book (1967). In more recent years, The Lion King (1994) and most definitely Shrek -1 and 2 (2001, 2004) seem to have touched on more issues than telling a story, but while all of these are engaging and hold one’s attention for many reasons, I don’t think I have ever seen a cartoon quite so gentle or moving as Charlotte’s Web.