A common household scene of conflict between a parent and a teenage child played out in my family recently. The subject of conflict was choice of language studies – choice between a native language and a foreign language. It took several adult heads to figure out that inspiration and not coercion is the way to go about these conflicts.
***
Last week, I was witness to an epic battle. A battle of words (and wits) between an icy calm aggressor and a thoroughly agitated challenger. A battle between a 14 year-old-boy and his hapless mom!

It all started when Naveen, in the midst of rush hour madness, coolly made an announcement at the breakfast table. He had applied for a switch in his second language elective at school – from Sanskrit to French. Having made the decision unilaterally, he just passed on the news to his family, and timed it quite well too – when there were just a couple of minutes left for his school bus to arrive and more importantly, when his father was out of town on business!

The recipients of the news were his mother, kid sister and grandfather. They were quite unprepared for any matter of consequence other than getting the two kids on the bus without any mishaps. After a brief lull in thought as they absorbed the news, Naveen’s mother, Uma broke into an impassioned plea. “Naveen, why did you take such a decision without consulting any of us? What’s the reason for the switch? Are your friends forcing you? What’s wrong with taking up Sanskrit?” 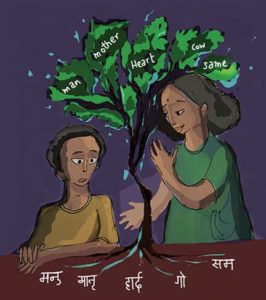 As is wont with teenagers, Naveen tactfully ignored all the emotional drama and stated his case with clinical precision. “Ma, I don’t want to be learning a dead language. I might as well learn a language that connects the world, lingua franca you know.” And with that passing shot, he made his way out of home quite casually and unhurriedly.

What transpired in the next few hours, I am not privy to. I came into the picture when I got a call at work during lunch. It was my cousin, Uma, sounding quite agitated and urgently demanded my support and reinforcement. I landed up at their home that afternoon and got a gist of the battle in progress.

After spending a few minutes trying to be rational adults who allow their children to make their own decisions, we rejected that thought process outright. With the experience of age and life behind us, we were of the firm belief that today’s generation were not sufficiently exposed to the richness and perfection of the Sanskrit language. It was our responsibility to give the younger lot a taste of our language’s beauty and let them savour it as they grow older. It was a battle to be won and we were going to win it, we vowed.

The first course correction required was keeping aside parental coercion and emotional outbursts. We were going to argue our case with clear facts, backed up by data. “The key to winning this battle of wits is to treat the opponent as an equal”, Uma’s father chipped in with sagely advice.

Sanskrit grammar is a tricky matter and we decided we wouldn’t use that too much to base our case on. We would stick to the most appealing, easily identifiable characteristic of the Sanskrit language – that of it being a root language, from which almost every language in the world borrows some words. More so languages like English, which is rather generous in adopting foreign words and expressions!

With our strategy in place, we set about collecting a set of English words from diverse walks of life that carried a Sanskrit root. We didn’t want to make it too obvious that we have been putting in rigorous homework, so we picked about 20 words only. Though with a deeper study, we could find over 300 English words derived from Sanskrit!

Being a techie myself, and knowing fully well that Naveen was keen on taking up a tech career too, I pitched in with those aspects of Sanskrit that make it ideal for Natural Language Processing, a key ingredient to AI (Artificial Intelligence). It is a context free language with a unique characteristic of free word order (words in a sentence can appear in any order without altering the meaning of the sentence). I was sure this aspect would appeal to the boy. And Uma was fairly impressed with the point too. She jotted down the tech fundas, in preparation for her performance in the evening!

Another interesting aspect was discovered, courtesy an internet search. That, in Sanskrit, there were finite word roots (dhatu), around 2000 of them. And several prefixes and suffixes attached to these root words that allow you to make new words with several new combinations, even words for objects not invented yet!

After all the exhausting and exhilarating ground work, Uma’s father closed the book he was peering into and said with an emphatic sigh, “I hope the boy realizes that just because the root of a tree is hidden underground, it cannot be called ‘dead’. Sanskrit is the root of Indian culture, and it’s up to these kids to carry on the heritage.”

On a tangential note, I just remembered my father-in-law quoting several Tamil, Telugu words which are adopted into English – such as “Arisi” in Tamil for Rice and “Bandikokku” in Telugu for Bandicoot. But both my partners in study were firmly of the opinion that we should leave this ammunition for another battle, another day. On that note, I departed from their home with a cherished feeling of an afternoon well spent.

The next day I got a call from my cousin who couldn’t hide the excitement in her tone, when she declared how she put in her best performance. And more importantly, how she had earned her son’s respect for the way she had steered the discussion. He apparently felt convinced enough to come out with one or two French words himself, which seemed to have a Sanskrit root – Manouche (derived from “Manushya”) for instance!

She happily added that her husband’s timely phone call with a weighty punch, quoting a profound Sanskrit verse seemed to tilt the scales quite definitely. The verse goes thus –

(Great people do not give up on what they have begun).

I was just at the periphery of this incident but it did leave a lasting impression on me, on two fronts. One, the glorious heritage of the Sanskrit language, which ought to be preserved and nurtured and two, dealing with adolescents requires a great deal of sensitivity, empathy and homework!
***
The author is an IT industry drop-out after several years of slogging and money-making. She is hoping to channelize her passion for writing into a satisfying experience for herself and a joyous experience for her readers. She is a community member of the Bangalore Writers Workshop. She can be reached at [email protected].