I was listening to some old Hindi songs the other day, when a line from a Subhash Ghai film caught my attention: “Main hoon woh hero, yeh hai woh zero!” (I’m the hero, and he’s a zero). For those of you who are interested in the movies of the 80s, the song is from the Anil Kapoor-Madhuri Dixit starrer, ‘Ram Lakhan’. People in general do not mind being called ‘hero’ occasionally; in fact, some want to be given this title on a permanent basis. Not surprisingly, no one is keen on being reduced to a ‘zero’ even once. Students, of course, dread this number; they do not want to see it scribbled on their answer script or in their report card! Perhaps it is because we dread this number so much that we have come up with different ways of referring to it – cipher, nought, nil, duck, etc.

Let us take the case of the word ‘cipher’. Now as a child growing up, this was a word that I heard being used quite frequently at school. I still recall my maths teacher warning us that if we failed to write down all the ‘steps’ involved in solving a problem, we would be given a ‘cipher’. What he meant by that of course was that we would not be awarded any marks; we would get a zero for our attempt. Though the word ‘cipher’ is used nowadays, it is not in the context of numbers. We seldom hear people using the word to mean ‘zero’; the word is now used to refer to a message written using a secret code. ‘Cipher’ is a word that one encounters when reading spy novels or watching movies like Mission Impossible and James Bond. How did a word that originally meant ‘zero’ come to mean ‘secret system of writing’? To understand this, we need to take a look at the history of the word.

It was the Arabs who gave us the word. ‘Cipher’ came to English and other European languages from the Arabic ‘sifr’ meaning ‘zero’. Do you know from whom the Arabs borrowed the word? From us, the Indians! Many scholars believe that ‘sifr’ is a corruption of the Sanskrit ‘sunya’ meaning ‘empty’. When the Arabic numerals were borrowed into Europe, ‘sifr’ became ‘ciphra’, and it was used to represent zero. With the passage of time, the modern day ‘cipher’ began to be used to represent any number and not just ‘zero’. Later, when people started sending secret messages using numbers to represent the letters of the alphabet, the word acquired its modern meaning. By early 16th century, ‘cipher’ began to mean ‘coded message’. 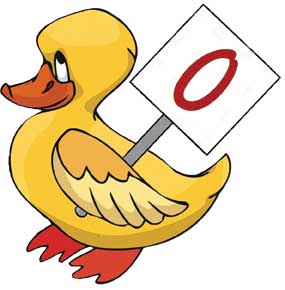 In cricket, whenever a batsman scores a zero, commentators say that he was out for a ‘duck’. What is the connection between the number ‘zero’ and a bird? Things begin to become somewhat clear when you learn that the original expression was ‘duck’s egg’. This term was used to refer to ‘zero’ because of the similarity in shape between the bird’s egg and the number. With the passage of time, ‘duck’s egg’ was reduced to ‘duck’. Sometimes, experts like Ravi Shastri and Ian Chappell use the word ‘nought’ instead of ‘duck’. The word ‘nought’ meaning ‘zero’ comes from the Old English ‘no-wiht’ meaning ‘nothing’. The unfortunate batsman scored nothing or zero.

While the word ‘zero’ is represented by the word ‘duck’ in cricket, the world of tennis uses a completely different word. Can you guess what it is? People who follow the game that Federer, Nadal and Djokovich excel in, know that at the beginning of every match, the umpire announces ‘love all’. Now the word ‘love’ has nothing to do with the emotion that we all associate with Valentine’s Day! This word is actually a corruption of the French ‘l’oeuf’, meaning ‘an egg’! The egg, as you know, has for a long time symbolised ‘zero’. So, when the umpire says, ‘love all’ what he means is that the score is ‘zero-zero’; neither player has scored a point as yet. This is one of the explanations. Other scholars have suggested that ‘love’ comes from the phrase ‘for the love of the game’. In the old days, people played because they enjoyed the game; money was not an important factor. Things have really changed since then, haven’t they? Nowadays the first thing that most sportsmen say is, “Show me the money!”

In case you are wondering why I haven’t talked about the origin of the word ‘zero’, maybe it is because Madhuri did not include this number in the song that catapulted her into stardom – the ‘ek, do, teen’ number in Tezaab. If experts are to be believed, ‘cipher’ and ‘zero’ are derived from the same word ‘sunya’. When the Italians borrowed the Arab ‘sifr’ into their language, they changed it to ‘zero’. Since the word ‘cipher’ began to acquire other meanings, the word ‘zero’ was used to refer to the number.

Native speakers of English sometimes pronounce the number ‘zero’ like the letter ‘o’. This perhaps explains why the dashing James Bond is frequently referred to as ‘Double O Seven’. Now this man is definitely a hero and not a zero.