“Change!” the new Principal said, settling in her chair.
“Yes,” grumbled orderlies, walking down the stairs.
“Change?” questioned senior staff, some very able.
“Yes!” said the chorus at the Principal’s table.
“Yes, we’ve changed,” beamed the Trustees, “For Life must go on-
And you know, the last gentleman – well, it was his Swan Song.
Oh, we know he was bright, he was good, he was gentle-
But, let’s pull up our socks, not be sentimental.
The new Principal is young, dynamic and strong-
With her at the helm, we just can’t go wrong.” 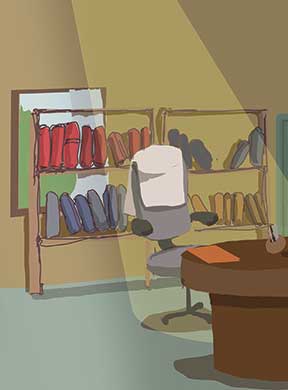 And so change came along with a swoop and a sweep,
The Principal worked for days without sleep –
Everything, everything, all had to go –
“Just don’t ask why. The Principal said so.”
And a new school was up, so spanking clean –
Old hands were bullied or rushed off the scene,
Old uniforms gone, old badges replaced,
Old classrooms demolished for more and more space,
And then, with a majestic whoosh of her wand –
The old Exam Board just vanished – yes, it was gone!

Overworked and confused, now all the teachers
Had new rules to follow, new subjects, new features,
And there were meetings late into the evening –
Teachers began mumbling and grumbling and grieving.
And then came the – publicity – TV, the Press!
“Yes, Principal!” smiled sycophants, “Oh, yes, yes, yes, yes!”
But the Principal had sighted a more power filled station
Somewhere abroad! Her heart jumped with elation.
And then she was gone. And nobody knew
How to re-start or just what to do.
“No more dynamism,” the Trustees decided,
“Let’s have someone now who will always be guided
Someone whom we will control and maintain
A Principal yes, but only in name.”

Top – heavy schools have styles they may relish
But when the top falls, they crumble and perish.
There are stories of those too young or too ill,
Of puppets and tyrants, those of whim and of will –
So maybe it’s true that the school which is best
Is the one which need not compete at all with the rest,
The school whose philosophy keeps it in place,
A school which is confident and keeps a steady pace,
Where yes, there’s a Principal, the first among others
Who are part of a Core Team that cannot be smothered.
Such ideals and identity can keep a school strong
Not individuals. That’s when it goes wrong.

The author is an educationist and children’s writer based in Mumbai. She can be reached at bubla@rediffmail.com.