When you hear the word yellow, a flurry of images ushers in thoughts of bright morning sunshine, sunflowers looking up at the sky, Winnie the Pooh, The Simpsons, shimmery earrings or gold bangles, the sunny side up you had for breakfast, the yellow rose you got on Friendship Day, school children packed in a yellow auto and singing “yellow yellow dirty fellow sitting on a buffalo”, or the new way of saying hello! 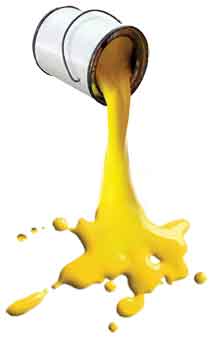 The Anglo-Saxons claim the origin of the word ‘yellow’ as it is derived from their Old English words ‘geolu’ or ‘geolwe’; the oldest written use is found in the epic poem Beowulf in a description of a shield made of wood from a yew tree. Yellow has varying connotations and interpretations in different countries across the globe.

The fifth colour of a rainbow, the hues of yellow represent a plethora of emotions – happiness, optimism, warmth, merriment, communication, spiritual awakening and enlightenment. It is said to stimulate the nervous system and radiate positive energy. Yellow is indeed an energetic and bubbly colour, the colour of daylight and the starry night sky.

Jews wore yellow armbands in the Nazi concentration camps. 10th century France saw doors of traitors and criminals painted in yellow. It is ironic that the word ‘yellow-bellied’ describes cowardice, as Japanese warriors of the War of Dynasty in 1357 wore yellow chrysanthemums as a pledge of courage and patriotism! In politics, yellow represents liberalism in many countries. The phrase ‘Yellow Dog Democrat’ refers to a hard-core democrat. Southerners in the late 19th and early 20th centuries disliked republicans and would vote for a ‘yellow dog’ rather than a Republican.

The Yellow Ribbon, founded in 1994, is a community-based program for the prevention of teen suicides and is the initiative of the parents of a carefree teen called Mike Emme, who took his life when he couldn’t express himself in his time of trouble. Ever since, they have successfully addressed issues faced by young adults who are lost somewhere in their growing years.

We are all fascinated with bright yellow pencils freshly sharpened. Ever wondered why they are yellow? The USA has been importing graphite from China since the 1800s. American pencil makers wanted a special way to acknowledge this Chinese connection. Since the 1980s, 75% of all American pencils have been painted yellow, a colour that stands for royalty and respect in China. This is their way of showing gratitude to China, a supplier of high quality graphite.

In Indian culture, yellow is a very auspicious colour and symbolizes purity and knowledge. In Hindu and Syrian Christian marriages, the traditional thread, mangalsutra – a sacred thread for the day of the wedding – is coated with turmeric powder and has a gold pendant. The use of turmeric is chiefly in the states of South India. The lighting of the lamp precedes religious and cultural occasions and the brass lamps bring warmth and joy to the celebrations.

Yellow in Italy refers to real and fictional crime stories. In 1929, the first series of crime novels – the Il Giallo Mondadori series – published in Italy had yellow covers. Yellow journalism refers to sensational journalistic practices for higher newspaper readership. The truth is bent to pave way for libellous, slanderous and exaggerated facts to keep the reader glued to a story. This unethical practice has been prevalent since the 1800s and gained immense popularity in the 1900s with the circulation battles between Joseph Pulitzer’s New York World and William Randolph Hearst’s New York Journal.

Shakespeare’s Macbeth, a character with the tragic flaw of ambition, says – “I have lived long enough. My life is fallen into the sear, the yellow leaf…” to describe the fatal result of ruling as a tyrant on a usurped throne and losing the support of his people, having no one to turn to in his last days. Yellow symbolizes withering over time and crumbling to dust, a green leaf that becomes brown with age.

The reader in you would love Oscar Wilde’s poem Symphony in Yellow, through which he beautifully emphasizes the importance of art in life, taking the Aesthetic movement to great heights. Reading it is like looking at a thought-provoking painting that brightens the avenues of your mind. William Wordsworth’s Daffodils is a sunny poem exuding an aura of hope and bliss. The picture of “a host of golden daffodils” transports us to a dream-like state where nature’s beauty overtakes one’s soul.

In Aztec culture, yellow symbolized their primary food – corn. Imagine vast mustard fields – a farmer’s joy… When you are on the hunt for food, you might think of a Mc Donald’s Happy Meal or healthier options such as bananas, sweet lime, lemonade, cheese, or the American Sweet Corn vendor outside college gates.

Music lovers can listen to shades of yellow in rock with Coldplay’s Yellow, Joni Mitchell’s Big Yellow Taxi, Toni Orlando and Dawn’s Tie A Yellow Ribbon or The Beatles’ Yellow Submarine, and Claude Debussy’s western classical piece The Girl With The Flaxen Hair, melodies that linger in your memory forever.