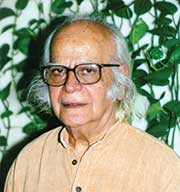 It was always hard to figure out how Professor Yash Pal maintained both hope and stamina. When things got messy, he would ask: “So, are you saying that we should give up on India?” It was not an open question. It was, in fact, the only closed question, that is, one with a fixed answer, he ever asked. Otherwise, Yash Pal treated all questions, especially from children, as invitations to let the mind roll freely from one context to another, noticing plug points where fresh connections were waiting to be established.

His primary identity was that of a scientist, but I knew him mainly as a pedagogue. He could turn any object or problem into a mystery deserving contemplation in its own right. During a meeting in Thiruvananthapuram, he chose a broom to illustrate his point that any object was good enough to make children think and inquire. Startled, and a bit embarrassed, his erudite audience heard him analyse the various properties of the common broom and its physics.

On another occasion, he explained the movement of planets by recalling the milk pot he had seen people carry in his childhood. They swung their right arm in rhythmic movement, holding the pot filled with milk to the brim. Why did it not spill? The answer showed parallels with the solar system.

In the history of educational theory, Yash Pal could only be bracketed with Antonio Gramsci. Like him, Yash Pal had full faith in the practices and wisdom of ordinary men and women. The job of a teacher-intellectual is to turn people’s common sense into good sense, armed with the capacity for abstraction that permits the human mind to see interconnections between problems and spheres of knowledge.

The various documents on educational policy prepared under his leadership can be summarised in one word – and it was his favourite word – “coupling”. That is, making connections and creating the possibility of dialogue.

He thought the root problem of India’s education system was “cubiclisation” – the tendency among teachers and researchers of different subjects to work in isolation. During the drafting of his report on higher education in 2008, he once explained to a small audience why the ultrasound testing machinery could not have been invented in India. It took scientists, engineers and doctors to work together, and in our country these three live in separate institutions.

I suspect Yash Pal knew how alien his ideas were to most teachers and administrators in India. This awareness did not make him gloomy about the success of his efforts to melt the boundaries that keep the education system fragmented. Rather, the realisation that the process of change he wanted to see was going to be tough filled him with an explorer’s energy and excitement.

In a league of his own
There are several documents carrying Yash Pal’s name, and their readers live in separate worlds. For instance, the National Curriculum Framework, 2005, which he enabled the National Council of Educational Research and Training to draft remained unknown and unread in universities. Arjun Singh, then the human resource development minister, had told a seminar of vice chancellors that higher education needed a similar document. Instant criticism greeted this statement. The critics alleged that the minister wanted to impose a uniform curriculum on universities. Apparently, the critics had not read the National Curriculum Framework.

During the drafting of the framework and even after it was approved, Yash Pal was criticised, often bitterly, by both the Left and the Right. Neither side had the imagination and openness to grasp what he was trying to do. It is no surprise that although he lived among scientists, bureaucrats and politicians, Yash Pal was most comfortable and visibly happy when he was with children, responding to their questions or posing his own. Why do champa flowers come down from the tree rotating? Why doesn’t HIV spread through mosquitoes? Why do two layers form in a roti, allowing steam to puff it up? His responses to thousands of such questions remain the key resource for us to make sense of his vanguard pedagogy. It lies in encouraging every child’s natural ability to find problems and pursue them. Some of these questions have been published by the NCERT under the title Discovered Questions. Another volume, titled Random Curiosities, has been published by the National Book Trust.

In his final years, Yash Pal was worried and a bit gloomy about the closing of the Indian mind. He was unhappy that his report on higher education was seen in conjunction with that of the Knowledge Commission. Kapil Sibal, the human resource development minister in the previous Congress-led government, and many others spoke about the two as if they were similar. The political transition that ushered in the Bharatiya Janata Party-led government created the feeling that a break from basic continuities in national reconstruction was imminent. The man who had worked with many regimes and knew how to make rivals converse felt uncertain at the end. He was anxious that our old tendency to buy and use solutions created elsewhere had regained ground. Nation-building, Yash Pal felt, was losing its inventive character.

This article first appeared on Scroll.in, an independent news, information and entertainment venture. You can read the original article here: https://scroll.in/article/845099/yash-pal-1926-2017-the-teacher-who-turned-peoples-common-sense-into-good-sense. The article has been reprinted here with permission.

Prof Krishna Kumar taught at the Central Institute of Education, Delhi University. As the NCERT director from 2004 to 2010, he oversaw the drafting of the National Curriculum Framework, 2005. He dedicated his book A Pedagogue’s Romance: Reflections of Schooling to Prof Yash Pal. He can be reached at anhsirk.kumar@gmail.com.