The January 5, 2013 Deccan Chronicle (nearly three weeks after the Delhi gang rape incident) carried an article by Antara Dev Sen titled ‘The Honour Trap”. She had written about how she had once travelled with Phoolan Devi and how even that ‘formidable Bandit Queen’ did not want people to know that she had been raped. Dev Sen went on to write about how Phoolan Devi had spoken about her annoyance with Shekar Kapoor and his film for showing that she had been gang raped. She did not mind being known as a killer, a dacoit, a gun-slinging criminal or even a jailbird, but she did not want to be known as a victim of gang rape.

Dev Sen reflects on this and pleads for an attitude change; she also asks that the stigma be transferred from the victim to the perpetrators, along with a better understanding of what sexual violence is. I do not disagree with her, but feel that this notion of ‘shame’ that she had written about, (the ‘shame’ that Phoolan Devi felt in being identified as a gang rape victim) is much more deep rooted.

More than two decades ago, my nephew, who was then in class four came home from school one day to announce to his mother: ‘Amma, Akka (that is what they called their teachers in school) shame shame ellaa(n) kiDaiyaathu; girls kooDa boysikku and naanga kooDa girlsikku thevennaa bathroom pooradhukku help paNNalaam” (there is nothing called shame shame; girls can help boys and we can help girls if needed to go the bathroom). This was in the context of his friend having broken his hand and therefore needing assistance to use the toilet in school and put on his pants! My sister agreed, and said, “Yes of course there is no shame, girls must help boys and boys must help girls, all of you are classmates,” and that was the end of the matter.

What bothers me is that a teacher had to make this statement. It implies that even by the age of 9 or 10, children have already been taught to think of their bodies as shameful. This is what prevents us, (particularly girls or women) from being able to come out into the open and talk about sexual molestation or violence. 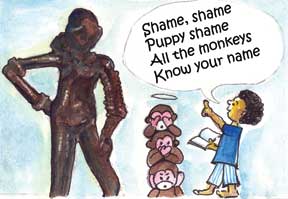 All of us have had the experience, at one time or another, of a child in our house, (could be a son, daughter, niece, nephew or cousin) running out of the bathroom, naked, excited about something and therefore oblivious of that state of nakedness! Our first reaction is: “shame shame, cover yourself”. I am not sure whether we want to inculcate this sense of ‘shame’ because we know that the world is a bad place, or whether its origin is simply our discomfort with our bodies. Either way, we make children aware of their own bodies, as something to be ashamed of. This is where the sense of shame begins. If the child is a boy it probably stops with this chastisement. When the child is a girl it gets worse; ‘others can see you; you must not show your body’. And then, this continues into puberty! A man or woman can cut his or her hand, have a blood stained dress or shirt and comfortably talk about it in public or amongst friends and ask for help in getting it washed or rinsed out. But if ever a girl has a bit of a disaster when she is menstruating, and finds that she has had heavy bleeding and there is a stain on her clothes, then woe-betide her! You have no shame, you are not careful; you are not aware of yourself although you are so old and so on! These harsh statements do make children aware of their bodies but not in a ‘I-am-happy-with-myself’ way. We make children ashamed and not proud of their own bodies. In a Utopian, ideal world this sense of comfort and even pride would be sufficient, but in today’s world, while we do need to make children comfortable in their skin, we also need to do the opposite. We need to make our children aware, since the world is not always a nice place, about a right and a wrong touch.

About 15 years ago, my colleague’s daughter came to my house to ‘just chit-chat’ as she put it but after a while, when we went for a walk, she spoke to me about how whenever she went to a shop nearby, the shopkeeper would ask her to come round the counter, stand next to him or in front of him and then choose what she wanted. This child just described it, but paused; instinctively, she knew something was wrong, but was not sure what. I suspect that she was also not sure of reactions at home or was scared of talking to her parents, even though they were not the kind who scolded her often. Parents are usually the ones who inculcate the sense of shame in children; this makes them inaccessible on such topics. As an aunt who also played hop-scotch with them, I was probably more accessible and someone she felt she could talk to. I had a quick ‘chat’ and told her that there was no need for such ‘going around the counter’, that she should refuse, and that if it happened again, to come and talk to me about it and that it was also okay for her to go and talk to her parents. I reiterated that she must not, ever, remain silent on this issue. This small reassurance was enough and that was the end of that.

These two incidents are representative of the kind of things that happen over and over again. Families and children change, but the incidents and our reactions to them as adults do not. At one level we make our children unnecessarily aware of their bodies at a stage when they are quite comfortable with themselves. At another level, when children do need to become aware and sensitive, we don’t talk about such issues comfortably and openly and this often makes children vulnerable to abuse.

While neither of these precautions could have prevented the gruesome gang rape in Delhi, timely, informed discussions will take away shame and also build awareness.